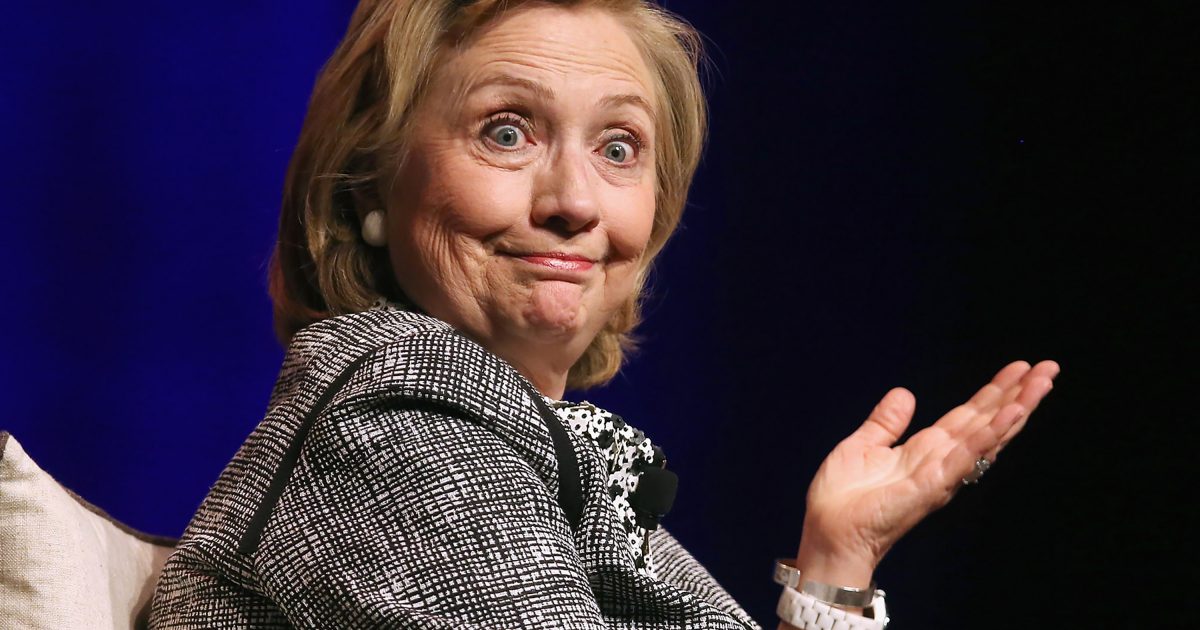 While “Make America Great Again” became the catch-phrase for Donald Trump’s campaign and tenure as president, the most famous phrase associated with Trump that rang the bell for many conservative, Christian, constitutionalists was, “Lock her up!” – referring to Democrat candidate Hillary Clinton and her numerous crimes well documented as Secretary of State, before and after her failed campaign for president.  Yet, Trump called Clinton “good people” in reference to her “service” to the united States after assuming office.  American citizens are still waiting on Trump to “lock her up” or begin investigations into her numerous scandals – Benghazi, Uranium One, and email server-gate – and the infamous Clinton Foundation.  Unfortunately, due to recent developments, the investigation into Hillary’s numerous scandals and the Clinton Foundation may not get off the ground.

FBI agents raided the home of a recognized Department of Justice whistleblower who privately delivered documents pertaining to the Clinton Foundation and Uranium One to a government watchdog, according to the whistleblower’s attorney.

The Justice Department’s inspector general was informed that the documents show that federal officials failed to investigate potential criminal activity regarding former Secretary of State Hillary Clinton, the Clinton Foundation and Rosatom, the Russian company that purchased Uranium One, a document reviewed by The Daily Caller News Foundation alleges.

The delivered documents also show that then-FBI Director Robert Mueller failed to investigate allegations of criminal misconduct pertaining to Rosatom and to other Russian government entities attached to Uranium One, the document reviewed by TheDCNF alleges. Mueller is now the special counsel investigating whether the Trump campaign colluded with Russia during the 2016 election.

“The bureau raided my client to seize what he legally gave Congress about the Clinton Foundation and Uranium One,” the whistleblower’s lawyer, Michael Socarras, told TheDCNF, noting that he considered the FBI’s raid to be an “outrageous disregard” of whistleblower protections.

Before continuing, if you remember back when Edward Snowden exposed the extent of the government intelligence community spying and surveillance operation against the American people, Sen. Dianne Feinstein claimed Snowden could have come to hercommittee and gained protection under the “whistleblower law.”  Snowden, a government contractor, chose instead to go to the news media with his evidence.  No one should wonder why Snowden did this now in light of the FBI’s disregard for the whistleblower law in raiding the home of Mr. Cain and declaring Mr. Cain in possession of “stolen federal property.”

Sixteen agents arrived at the home of Dennis Nathan Cain, a former FBI contractor, on the morning of Nov. 19 and raided his Union Bridge, Maryland, home, Socarras told TheDCNF.

The raid was permitted by a court order signed on Nov. 15 by federal magistrate Stephanie A. Gallagher in the U.S. District Court for Baltimore and obtained by TheDCNF.

A special agent from the FBI’s Baltimore division, who led the raid, charged that Cain possessed stolen federal property and demanded entry to his private residence, Socarras told TheDCNF.

“On Nov. 19, the FBI conducted court authorized law enforcement activity in the Union Bridge, Maryland area,” bureau spokesman Dave Fitz told TheDCNF. “At this time, we have no further comment.”

Cain informed the agent while he was still at the door that he was a recognized protected whistleblower under the Intelligence Community Whistleblower Protection Act and that Justice Department Inspector General Michael Horowitz recognized his whistleblower status, according to Socarras.

Cain further told the FBI agent the potentially damaging classified information had been properly transmitted to the Senate and House Intelligence committees as permitted under the act, Socarras said. The agent immediately directed his agents to begin a sweep of the suburban home, anyway.

Frightened and intimidated, Cain promptly handed over the documents, Socarras told TheDCNF. Yet even after surrendering the information to the FBI, the agents continued to rummage through the home for six hours.

“After asking and getting my approval to do so, DOJ IG Michael Horowitz had a member of his staff physically take Mr. Cain’s classified document disclosure to the House and Senate Intelligence committees,” Socarras told TheDCNF.

“For the bureau to show up at Mr. Cain’s home suggesting that those same documents are stolen federal property, and then proceed to seize copies of the same documents after being told at the house door that he is a legally protected whistleblower who gave them to Congress, is an outrageous disregard of the law,” he continued.

Cain came across the potentially explosive information while working for an FBI contractor, Socarras told TheDCNF.

One has to wonder how the FBI agents knew it was Cain who had provided the information to the Department of Justice Inspector General.  Socarras indicated that Cain met the senior member of Horowitz’s office in a church close to the White House;  sat in a pew while wearing a hoodie and sunglasses; and passed the double sealed envelope containing a flash drive

over his shoulder to the IG official, who said nothing and left.  While the IG official “met” with Mr. Cain, it was not a face to face, nor it appeared that either verbally spoke to the other.  This begs the question, “was this official really from IG Michael Horowitz’s office?”  Could the alleged IG official actually be an FBI or other intelligence agent intent on discovering the identity of the whistleblower in order to “terrorize” and “intimidate” him and his family in order to silence him?  The big question is, “was Horowitz in on this?”

Due to the level of the corruption in Washington, DC, and the depths to which the Deep State and Shadow Government will go to protect the entities’ unimpeded authority, it would not come as a surprise if the official was not from Horowitz’s office; was, in fact, an intelligence agent intent on discovering Cain’s identity to terrorize and intimidate him; and Horowitz initiated the entire scenario.

The law protects whistleblowers who are government contractors and requires the IG to share such potentially damaging information with the attorney general — who at the time was Jeff Sessions.

“I cannot believe the Bureau informed the federal magistrate who approved the search warrant that they wanted to search the home of an FBI whistleblower to seize the information that he confidentially disclosed to the IG and Congress,” Socarras told TheDCNF.

The whistleblower act is intended to protect whistleblowers within the intelligence community, which includes the FBI.

“The [whistleblower act] authorizes employees of contractors to take government property and give it to the two intelligence committees confidentially,” Socarras told TheDCNF.

The FBI has yet to talk to Cain’s attorney despite the raid, according to Socarras.

“After the raid, and having received my name and phone number from Mr. Cain as his lawyer, an FBI agent actually called my client directly to discuss his seized electronics,” Socarras told TheDCNF. “Knowingly bypassing the lawyer of a represented client is serious misconduct.”

The Justice Department and the IG both declined to comment.

In regards to the magistrate who approved the home invasion and search, Stephanie A. Gallagher, there exists two possibilities for her “order”:  the FBI did not disclose the individual targeted was a protected whistleblower;  or, the FBI did disclose the status of the individual and Gallagher is part of the corrupt machine  infecting this country.  Gallagher was an unconfirmed Obama nominee whom President Trump put forward and was confirmed unanimously.  According to The Vetting Room, Gallagher has evenly divided her support between the two major parties.  Now, why would she do that?  Given that Hussein Soetoro nominated her, it would stand to reason that she leaned more toward the Democratic socialist/communist agenda in more recent years because we know how #44, along with Hillary Clinton, felt about Republicans and their supporters.

And, one has to wonder why Trump would put her name forward knowing Hussein Soetoro nominated her and McConnell thwarted her confirmation only to have her nomination confirmed during Trump’s tenure.  But, I digress.

Clearly, there is a criminal violation on the part of the FBI and any others involved in the raid and search of Cain’s home.  The problem is that federal government agencies and those employed in those agencies operate with impunity.  Moreover, Democrats have retaken the House, meaning the House committee that will be looking at these documents will be in control of the “Politicrats.”  And, with the sycophantic lamestream entertainment enemedia gathering more buckets in order to carry the water for these criminals, it is highly unlikely the American public will hear much about what Cain has discovered, if anything at all.  After all, Americans have heard nothing from the lamestream entertainment enemedia about the UN Intergovernmental Conference to Adopt a Global Compact for Safe, Orderly, and Regular Migration.  Again, I digress; but, will cover this later since the conference is scheduled December 10 -11, 2018, in Marrakesh, Morocco.

The message being sent by the Deep State and Shadow Government is clear – be a whistleblower and we’ll get you regardless of laws passed to protect you.  The law is only words written on a piece of paper when there is no enforcement against those who violate the law.  For decades now, the American people have watched with disbelief as Senators, House Representatives, federal government employees, heads of federal Departments, and agency heads have continually violated the law with impunity despite overwhelming evidence pointing to guilt – Hillary Clinton, Loretta Lynch, James Comey, James Brennan, Hussein Soetoro, “Mad Max”ine Waters, Corey Booker, Lois Lerner, Nancy Pelosi, Dianne Feinstein, the Bushes, Bill Clinton, and a partridge in a pear tree host of others.  Americans have watched in horror as laws designed to protect citizens against violations by government and police have been whittled away by a lawless Supreme Court and federal government.  Dennis Nathan Cain is the most recent victim, who will be used as an example to thwart others from being whistleblowers.  Let’s just hope Cain does not become a casualty in the Deep State and Shadow Government maneuvers for absolute power.