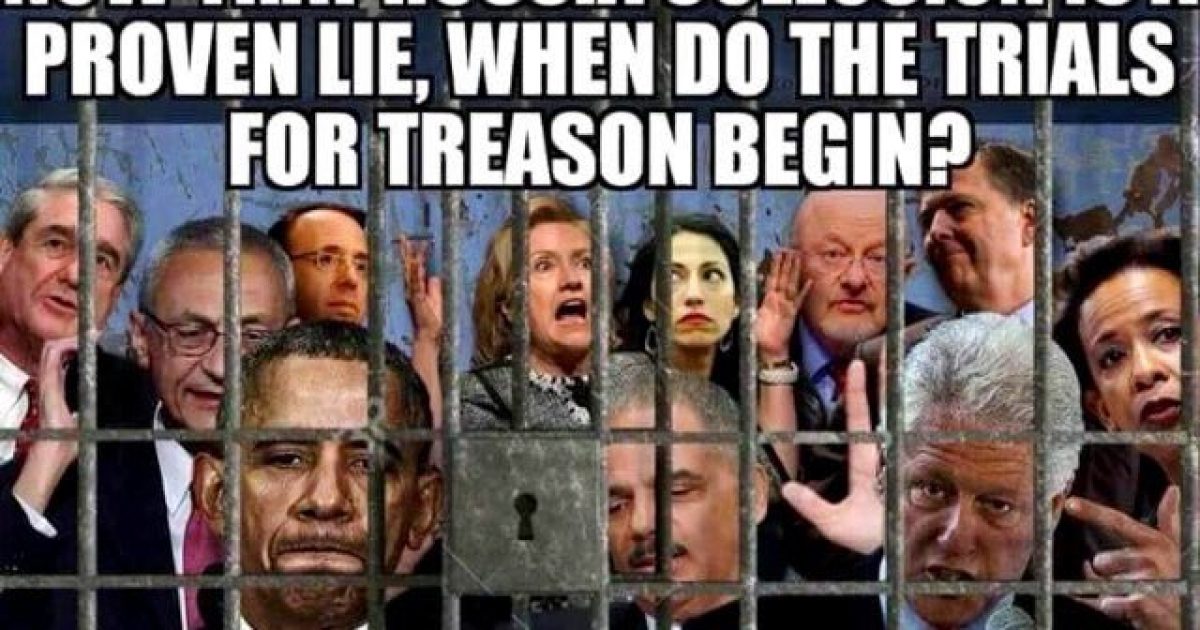 I was going to write on this two days ago, but shelved it.  However, on Wednesday, President Donald Trump retweeted a tweet from The Trump Train on Twitter that had various pictures of key Democrats behind prison bars with the text, “Now that Russia collusion is a proven lie, when do the trials for treason begin?”  Well, plainly put, they begin when you are actually ready to enforce the law against their crimes and treason, Mr. President.

Here’s the tweet, in case you haven’t seen it.

Remember, during his campaign, President Trump promised the America people that he would tell his attorney general to appoint a special prosecutor to look into Hillary Clinton’s crimes, especially concerning her illegal email server.  That was a promise he made to us.

As of today, nothing has been done.  Clinton remains free and continues to be a thorn in his side, along with all the people in the above picture.   They are also a thorn in our side as they skirt justice.

Who is allowing this to happen?  It’s you, Mr. President.

If you recall, in November 2017, I reported on Donald Trump’s “frustration” that he couldn’t order his attorney general to do what he promised the American people he would do.

“Why aren’t they going after Hillary Clinton with her emails and with the dossier, and the kind of money?” Trump added. “Now, maybe they are, but as president, and I think you understand this, as a president you are not supposed to be involved in that process.”

The reality is that the Constitution gives authority to the president and the president alone to enforce the law.  So, if someone like Jeff Sessions wouldn’t do the investigating, perhaps someone like Acting Attorney General Matthew Whitaker will.  In either case, it is President Trump’s duty to be involved in that process.  He knows there is a crime that has been committed and the FBI does too.

This is not complicated.

As our constitutional scholar Publius Huldah has pointed out, the job of the president is pretty limited and defined.  She listed what he is authorized to do.

Here is the complete list of the President’s enumerated powers:

Art. I, Sec. 7, cls. 2 & 3, grants to the President the power to approve or veto Bills and Resolutions passed by Congress.

Art. I, Sec. 9, next to last clause, grants to the executive Branch – the Treasury Department – the power to write checks pursuant to Appropriations made by law – i.e., by Congress.

Art. II, Sec. 1, last clause, sets forth the President’s Oath of Office – to “preserve, protect and defend the Constitution of the United States”.

Article II, Sec. 2, cl. 2 grants to the President the power:

Article II, Sec. 2, cl. 3 grants to the President the power to make recess appointments, which expire at the end of Congress’ next session.

That’s it! Anything else the President does is unlawful and a usurpation of powers not granted.

So, Mr. President, according to Article II, Section 3, you are to “take care that the Laws be faithfully executed.”  That means you are to enforce them.  Furthermore, that is part of your duty in the oath you took per Article II, Section 1 to “preserve, protect and defend the Constitution of the United States.”

It’s been almost two years since Donald Trump took office.  The FBI already had in its possession enough evidence to indict Hillary Clinton, but chose not to do so, even though they admitted she broke federal law.  Furthermore, in doing so, she put national security at risk.

I’ve been told by people that “it takes time to make an airtight case.”  Fine, but look, ranchers were indicted faster than this and the mountain of evidence against Hillary Clinton and others in the Obama administration, including Obama himself, is more than enough that indictments should be taking place.

I know there are some out there who buy into the QAnon thing.  While I do find some of it a little fascinating, I honestly believe it’s nothing more than continuing to hold a carrot out to you.  Sealed indictments are just that, sealed; and no one knows who they are about or what they contain until they are unsealed.  Someone is merely guessing and while I would be thrilled if it is found to be true, the fact is that we’ve basically not heard anything about it.

Judicial Watch has demanded Clinton’s case be re-opened after tens of thousands of emails from Clinton have surfaced after they demanded them.  Why will President Trump not do what Judicial Watch has done and go further to order that special prosecutor he promised?  Can you imagine if he would fire Robert Mueller today andthere be indictments against him in the ongoing investigation by the Tennessee Bureau of Investigation into his framing a veteran on a gun charge; and announce a special prosecutor to investigate Hillary Clinton?  Can you imagine the heads of the mainstream media pundits exploding night after night with the revelations that would come out of that investigation leading up to an indictment?  I can, but I’m not holding my breath on it.

Honestly, if there are treason trials, I’ll be the happiest person in the world to say, I was wrong on this.  Until then, this tweet is nothing more than political theater to keep the masses on the edge of their seats.  If and when they do occur, you can expect a lot of people to more than likely start being assassinated.  Count on it.