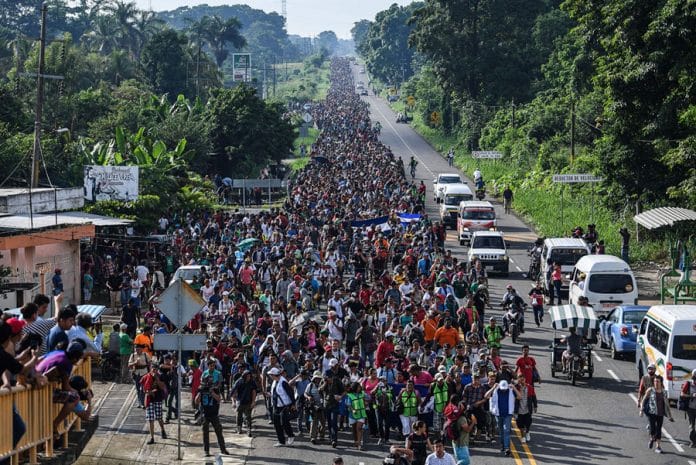 Mass migration is in many ways a manifestation of social and political engineering. From a historical standpoint, the elite and powerful have used mass migration to destroy the social order and disrupt the cultural harmony.

For example, the elite and powerful used mass migration to destroy Catholic neighborhoods and even the black family in the United States, from the 1930s and all the way to the 1960s.[1] They ended up killing two birds with one stone.

Mass migration inexorably leads to chaos, and chaos leads to ethnic conflicts, and ethnic conflicts lead to disruption of the social order. And who loves to disrupt the social and moral order? The rich, the powerful, the warmongers, and the ethnic cleansers. All you have to do is take a look at the Middle East, Russia in the 1990s, and Europe at this present moment.

Europe is being attack because of mass migration. How did it happen? Well, the elite and powerful started to set sovereign nations up in flames. Countries such as Iraq, Afghanistan, Pakistan, and Libya, have been in chaos since 2001.

Hundreds of thousands of people have died for literally nothing during those senseless wars. Millions of homes have already bombed in the Middle East, and the elite themselves are laughing at how they are using the military to destroy both countries in the Middle East and US veterans themselves. As Henry Kissinger himself put it, “Military men are just dumb, stupid animals to be used as pawns in foreign policy.”[2]

In other words, the elite and powerful are using military men as expendables. Yet the interesting thing is that those people have never taken Frankenstein seriously. They can never imagine that the monsters they continue to create in much of the world have and will continue to come back and hunt them. For example, there was no Muslim mass migration in Europe before the debacle in Iraq.

Once Iraq was literally destroyed, people have to migrate. Countries in the West supported the wars in the Middle East, and now they are complaining that they cannot stand the Muslim influx in Europe. Nationalist groups are now everywhere, ready to set the world on fire.[3] But where were they when the Neocons and other Satanists were destroying livelihoods in the Middle East? Where were they when the Anglo-American empire literally overthrew a democratically elected president in Iran in 1953?

Nowhere to be found. In fact, the elite and powerful in the West continues to support the aimless war in Syria. 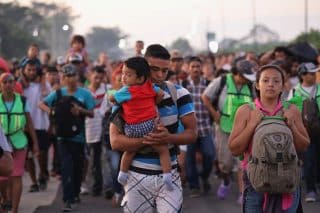 It is the same thing when it comes to the recent caravan of immigrants from Honduras. The United States has been meddling in Honduras for years, and this goes all the way to the Reagan administration and beyond.[4] As historian Dana Frank of the University of California has shown in her recent study The Long Honduran Night: Resistance, Terror, and the United States in the Aftermath of the Coup, the United States started to use Honduras for its imperial project since 1910. By 1954, writes Frank,

“The United States used Honduras as the base from which to launch a CIA-organized coup that overthrew the democratically-elected socialist president of Guatemala, Jacobo Arbenz, ushering in decades of state-sponsored genocide against the Guatemalan people.

“During the 1980s, the United States used Soto Cano Air Base at Palmerola, jointly operated with the Honduran government, as a base for the murderous Contra War against the left-wing Sandinista government of Nicaragua. Throughout the 1980s, under the watch of US Ambassador to Honduras John Negroponte, the United States worked closely with repressive Honduran armed forces, including the famous Battalion 3-16 death squad responsible for the deaths of Honduran leftists.”[5]

Nothing has changed over the years. In the name of fighting drugs, the United States continued to destabilize Honduras even during the Obama administration.[6] The United States supported the corrupt government, where it is said that “40 percent of the Honduran police are involved in organized crime.”[7] Moreover, it was clear to many that the United States used the drug war in Honduras “as a pretext for a greater military occupation…and to block the wave of political change driven by the national resistance.”[8]

Virtually nothing has changed over the years. As Professor Joseph Nevins of Vassar College has meticulously pointed out:

“U.S. military presence in Honduras and the roots of Honduran migration to the United States are closely linked. It began in the late 1890s, when U.S.-based banana companies first became active there. As historian Walter LaFeber writes in ‘Inevitable Revolutions: The United States in Central America,’ American companies ‘built railroads, established their own banking systems, and bribed government officials at a dizzying pace.’

“As a result, the Caribbean coast ‘became a foreign-controlled enclave that systematically swung the whole of Honduras into a one-crop economy whose wealth was carried off to New Orleans, New York, and later Boston.’

“By 1914, U.S. banana interests owned almost 1 million acres of Honduras’ best land. These holdings grew through the 1920s to such an extent that, as LaFeber asserts, Honduran peasants ‘had no hope of access to their nation’s good soil.’

“Over a few decades, U.S. capital also came to dominate the country’s banking and mining sectors, a process facilitated by the weak state of Honduras’ domestic business sector. This was coupled with direct U.S. political and military interventions to protect U.S. interests in 1907 and 1911.

“Such developments made Honduras’ ruling class dependent on Washington for support. A central component of this ruling class was and remains the Honduran military. By the mid-1960s it had become, in LaFeber’s words, the country’s ‘most developed political institution,” – one that Washington played a key role in shaping.’”

The United States’ activities in Honduras were so powerful that many analysts called the country the “U.S.S. Honduras” and the “Pentagon Republic.” This was actually the case during the Reagan administration. Nevins continues:

“As part of its effort to overthrow the Sandinista government in neighboring Nicaragua and ‘roll back’ the region’s leftist movements, the Reagan administration “temporarily” stationed several hundred U.S. soldiers in Honduras. Moreover, it trained and sustained Nicaragua’s “contra” rebels on Honduran soil, while greatly increasing military aid and arm sales to the country.

“The Reagan years also saw the construction of numerous joint Honduran-U.S. military bases and installations. Such moves greatly strengthened the militarization of Honduran society. In turn, political repression rose. There was a dramatic increase in the number of political assassinations, ‘disappearances’ and illegal detentions.

“The Reagan administration also played a big role in restructuring the Honduran economy. It did so by strongly pushing for internal economic reforms, with a focus on exporting manufactured goods. It also helped deregulate and destabilize the global coffee trade, upon which Honduras heavily depended.

“These changes made Honduras more amenable to the interests of global capital. They disrupted traditional forms of agriculture and undermined an already weak social safety net. These decades of U.S. involvement in Honduras set the stage for Honduran emigration to the United States, which began to markedly increase in the 1990s.”

In 2009, Honduran and populist president Manuel Zelaya was overthrown in a military coup. In December of last year, the British newspaper the Guardian predicted:

“The political turmoil will probably have far-reaching consequences, and the United States, which wields considerable influence in the country, shares some responsibility for creating the political landscape that laid the ground for the crisis.”[9]

Zelaya, Nevins tells us, “led on progressive measures such as raising the minimum wage. He also tried to organize a plebiscite to allow for a constituent assembly to replace the country’s constitution, which had been written during a military government. However, these efforts incurred the ire of the country’s oligarchy, leading to his overthrow by the military in June 2009.”

Ever since Zelaya’s departure, the country has been inundated with political corruption and criminal activities. Nevins:

“This continues Washington’s longstanding willingness to overlook official corruption in Honduras as long as the country’s ruling elites serve what are defined as U.S. economic and geopolitical interests.

“Meanwhile, post-coup governments have intensified an increasingly unregulated, free market form of capitalism that makes life unworkable for many by undermining the country’s limited social safety net and greatly increasing socioeconomic inequality…These contribute to the growing pressures that push many people to migrate.”

Now Hondurans have to move to the country which has effectively stifled economic progress in Honduras. It was reported last May that there were nearly 1,200 migrants marching towards the US borders.[10] This is certainly the New World Order chickens coming home to roost. As Dana Frank of the University of California put it four years ago:

“The U.S. should take responsibility for that nightmare, and cut its ties with gang of oligarchs running Honduras, stop pouring funds into their police and military-including funds for police training…

“Yes, gangs are rampant in Honduras.  But the truly dangerous gang is the Honduran government.  And our own tax dollars are pouring into it while our top officials praise its virtues.”[11]

Through corruption, capitalism, and covert operations, the US helped the Honduran government to oppress the poor and weaken the economic and social fabric of the Honduran society. Frank continued to say:

“The Central America Free Trade Agreement (CAFTA), for example, has forced small and medium-sized producers to compete with U.S. agribusiness and other corporations.  In Honduras as elsewhere, neoliberal policies enforced through the U.S.-funded International Monetary Fund (IMF) and World Bank promote the elimination of public-sector jobs, privatization, and the reduction of social services A June 13 statement from the IMF Executive Board, for example, advocates “reducing the wage bill” of the Honduran government.”[12]

So when you hear a political mush-head talk about the caravan of immigrants without even addressing the fact that the US has been destabilizing Honduras for decades, then it is an infallible sign that you are in the presence of a useful idiot or ideologue.

Jonas E. Alexis has degrees in mathematics and philosophy. He studied education at the graduate level. His main interests include U.S. foreign policy, history of Israel/Palestine conflict, and the history of ideas. He is the author of the new book Zionism vs. the West: How Talmudic Ideology is Undermining Western Culture. He teaches mathematics in South Korea.
Share
Tweet
Share
Pin