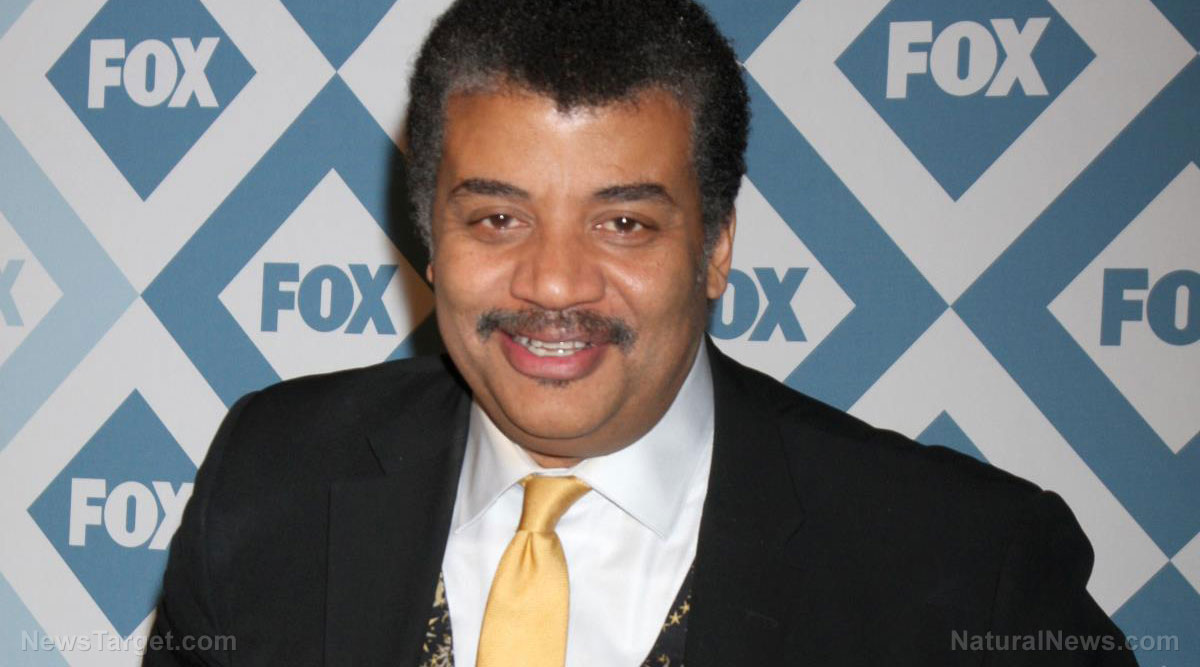 The first allegation was made public in 2014. Tchiya Amet, who attended graduate school with Tyson. She said her experience with the media star left her traumatized for decades. She explained she had been friends with Tyson in the 1980s at University of Texas at Austin, and was at his apartment when he offered her something to drink. Amet said Tyson then drugged and raped her.

In a blog post, Tchiya Amet details what she says was a horrifying date rape that involved Neil Tyson drugging and raping her, Bill Cosby-style:

“I was a grad student in Astronomy at  UT Austin, the same time that Mr Tyson was there,” writes Tchiya Amet on a WordPress website. “My dream was to become the first Black Female Astronaut.  I went to [Neil Tyson’s] apartment to visit like I did almost everyday. He was like my big brother, or so I thought.  He offered me a glass of water. I accepted a liquid in a cup made out of a coconut shell. I recall coming back to consciousness briefly, then next thing I remember is seeing him in the hallway the next day. I have lived in this nightmare for 30 years, and it stops today.”

Tchiya goes on to explain, “It has become impossible to keep silent anymore. I continue to wonder if he is still hurting women, children or men. It is also important for me to speak out NOW because it is important for ALL people that have been sexually violated in any way to stand up and speak out if we want this type of cruelty to cease.”

Tchiya is unambiguous in stating at Neil Tyson drugged and raped her. “What would you say to my parents if I had told them when it had happened that you had slipped me a mickey and that you raped me while I was unconscious?” she asks. She then demands Neil deGrasse Tyson stop sexually assaulting other students. “Do not rape them. Do not molest them. Do not tell them they can pass astronomy 101 if they give you a blow job. No more sexual harassment allowed or tolerated by any faculty members or clergy… You are a fraud and now the world knows it too.”

Taken by itself, that allegation from 2014 seemed like an outlier, which is why we had not reported on it until today. But last week, two more women stepped forward and claimed Neil deGrasse Tyson exhibited sexually inappropriate behavior towards them, lending additional weight to the date rape claim from 2014 as it exhibits a pattern of behavior involving multiple women who now publicly accuse Tyson of predatory sexual behavior.

Sexual assault allegations against celebrities who are opposed to the scientific status quo must always be taken with a grain of salt, given that “negative P.R.” companies are hired by the vaccine and GMO industries to try to destroy the reputations of independent scientists who question the status quo. But when sexual allegations surface against people like Tyson who are shameless promoters of the status quo, they automatically carry more weight because it’s impossible for such allegations to have been fabricated by the very industries that Tyson promotes.

Thus, these three allegations against Tyson now add up to a picture that closely resembles that of Bill Cosby — a famous, wealthy celebrity who abused his power to drug and rape women in large numbers.

After we had taken the picture, he noticed my tattoo and kind of grabbed me to look at it, and was really obsessed about whether I had Pluto on this tattoo or not… and then he looked for Pluto, and followed the tattoo into my dress.

It’s not a new allegations out of the blue, either. Dr. Allers reported what happened to Dr. Michele Thornley, an associate professor of physics at Bucknell. Patheos reports what she said about the incident:

Yes, Katelyn spoke to me about her earlier incident–I don’t think we discussed exactly what year it happened, but I knew that it was a few years earlier than our conversations about the matter.  Katelyn described the earlier incident to me in the fall of 2013, after she was invited to attend a dinner with Dr. Tyson when he was to be on campus in spring 2014 as a speaker in Bucknell’s “Tech/no” series.

Another woman, a former assistant of Neil Tyson, accuses him of inappropriate sexual advances and “creepy” dinner behavior in his private home

As Patheos reports, Neil Tyson’s pattern of creepy behavior toward women doesn’t end with the incident involving Dr. Allers. Another woman, Ashley Watson, worked as an assistant to Tyson. “…she was forced to quit her job due to his inappropriate sexual advances,” reports Patheos:

Watson worked directly with Tyson for several months. She says that, during that time, he put her in an uncomfortable situation by attempting to persuade her into sex, and demonstrated his “predatory tendencies.”

Importantly, Ashley Watson was sent text messages by alleged rape victim Tchiya Amet, who said, “he tried to seduce me into having sex with him… most people don’t believe he’s a predator because of his status as an educator…” 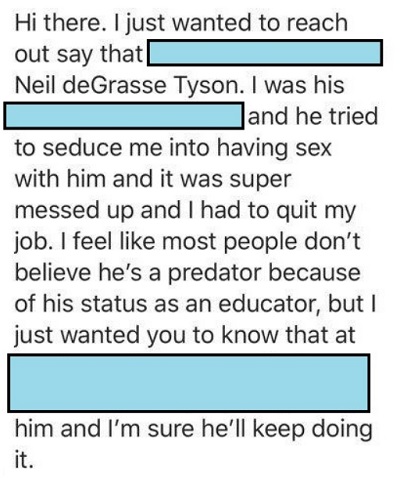 During a bizarre dinner with Ashley Watson, Neil Tyson, “allegedly gestured toward her with the knife and made a comment about stabbing,” reports Patheos. “And it set the stage for a night filled with subtle intimidation and sexual advances.”

Tyson went on to explain that every human being needs “physical releases,” according to Watson, and when she attempted to leave, Neil Tyson tried to per her into a trance using a hypnotic induction technique. As Patheos reports:

She was getting up to leave when Neil allegedly stopped her, saying he wanted to show her a “Native American handshake” he knew. That involved holding hands tightly, making eye contact, and feeling for each other’s pulse, Watson told me.

When she broke off the awkward and incredibly intimate handshake, which he allegedly said represented a “spirit connection,” she attempted to just get up and leave.

Tyson then allegedly put his hands on her shoulders, and said he wanted to hug her, but if he did, he’d “just want more.”

Watson says she left Tyson’s apartment quickly after the inappropriate sexual comments and that, the next day, she confronted him because she felt he had betrayed her as a mentor. He reportedly told her in that meeting that she’d never rise through the ranks in her career because she was too “distracting.”

The message from Neil Tyson is evident: Sleep with me or your career is finished

That last line is especially horrifying, because if true, it proves that Neil deGrasse Tyson threatens female workers and students with having their careers destroyed if they don’t sleep with him. And he uses creepy hypnotic induction techniques even while claiming to be a “man of science,” to boot.

This abuse of power smacks of the kind of exploitation of women pursued by Bill Cosby, who promised women he would help their careers if they only agreed to meet with him in his hotel room or residence. There, he drugged and raped dozens of women, according to widespread media reports, then threatened to destroy their careers if they spoke up.

It seems that Neil deGrasse Tyson may be exhibiting the same pattern of behavior, exploiting vulnerable women to fulfill his sexual urges while threatening to use his academic standing and celebrity power to either help them succeed or destroy their careers, depending on whether they agreed to sleep with him.

Watson called a “harassment hotline” and reported the entire incident, so there’s a record of it.

“Fox and National Geographic are investigating astrophysicist and television host Neil deGrasse Tyson after multiple women made claims of sexual misconduct against him,” reports The Daily Caller. “The producers of ‘Cosmos’ are also taking part in the investigation, which comes after Tyson, who is married, has been accused of misconduct, including rape.”

Bottom line: When sexual assault allegations are made against independent scientists, independent journalists, authors or whistleblowers who challenge the scientific establishment, such allegations should be met with skepticism. But when the very same allegations are made against people who represent the “elite” scientific establishment that pushes the climate change hoax, psychiatric drugs and toxic vaccine ingredients, those allegations carry much more credibility because it takes much more courage to speak out against the establishment than to attack someone who opposes it.

Neil deGrasse Tyson is the epitome of a globalist science insider. They’ve made him the poster child of modern pop science because he’s willing to attack independent science and promote whatever falsehoods the establishment wants him to promote. That’s why the allegations from these women must be taken seriously and investigated further.