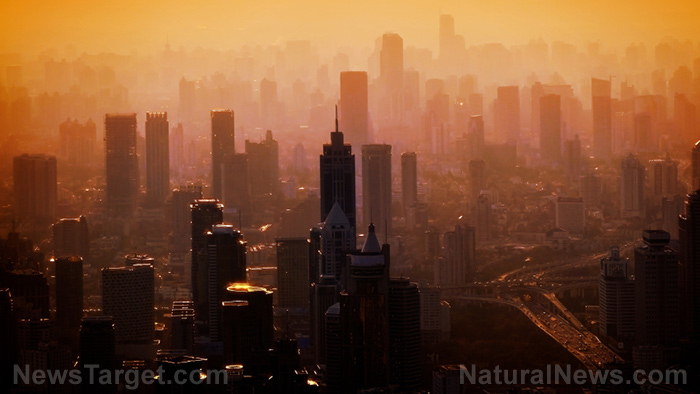 (Natural News) Now we come to the end game for humanity. This is it, folks: They have a plan to collapse global food production, kill off over 90% of the human race, devastate natural ecosystems and pollute the Earth’s atmosphere… and it’s all being sold to you under the banner of “environmentalism.”

The scheme is called “global dimming,” and it’s a dangerous geoengineering plot to spray billions of tons of smog into the atmosphere so that pollution levels would block sunlight and halt global warming. This is literally what the mad environmental scientists are now proposing — the very same people who have, for years, claimed that “chemtrails” are a conspiracy theory and don’t exist. Now, all of a sudden, they want to chemtrail the entire planet in order to “save” us all from global warming.

The global dimming scheme is, of course, based on spraying chemtrails into the upper atmosphere using thousands of high-altitude flights that release pollution to dim the sun. The very idea of “chemtrails” has, until now, been mocked by the media and the science establishment, who have for years claimed the very idea of chemtrails is a lunatic conspiracy theory. So they’ve changed the name to “stratospheric aerosol injection,” and they now have a science paper that outlines all the costs involved.

“We lay out a future solar geoengineering deployment scenario of halving the increase in anthropogenic radiative forcing,” writes Wake Smith and Gernot Wagner in their paper, “Stratospheric aerosol injection tactics and costs in the first 15 years of deployment.” Published in Environmental Research Letters, you can view the full text of the study at this link.

Geoengineering is another term that many people use synonymously with “chemtrails.” And now it’s a strategy being openly advocated by scientists to halt so-called “climate change,” a fake science hoax that has been perpetrated on the world by power-hungry globalists who want humanity to surrender to global rule in the name of “saving the planet.”

The study cites the specific aircraft that would be needed to achieve chemtrails pollution. “[P]urpose-built high-altitude tanker with substantial payload capabilities” would be deployed to spray sulfur dioxide into the atmosphere. The paper proposes 4000 flights a year, costing $2.25 billion per year, continuing over 15 years to make sure the atmosphere is significantly polluted to dim the sun and achieve the terraforming goals of globalists (see more details, below).

In the conclusion of their abstract, the study authors explain the program would require, “thousands of flights annually by airliner-sized aircraft operating from an international array of bases,” making it almost impossible to keep secret.

Of course, this very program has already begun, and secrecy isn’t necessary when you have the entire media and science establishment condemning any belief in chemtrails as a form of mental illness. So just remember: As they pollute the skies and dim the sun, if you point out that they’re polluting the skies and dimming the sun, you’re a “conspiracy theorist.”

And there’s no such thing as chemtrails, you see. Nope, it’s “stratospheric aerosol injection” now, which sounds almost sciency. That’s how this program is already being perpetrated right under our noses, right now, even while the media runs a global cover-up to dismiss such ideas as bizarre theories.

The global controllers hope you never read the science papers, of course, because there, geoengineering is routinely cited and even advocated as the “solution” to climate change.

“Stratospheric Aerosol Injection (SAI) would require lofting hundreds of thousands to millions of tons of material each year to altitudes up to ~20 km,” explain study authors. They also ask, “Could it be done in secret?”

The study offers heavy discussion on the design and costs of aircraft that could deliver the planned pollution to the upper atmosphere:

IPCC (2018) states that ‘there is high agreement that aircrafts after some modifications could inject millions of tons of SO2 in the lower stratosphere (~20 km)’.

The overall goal of the geoengineering program is to inject 5 million tons of SO2 (sulfur dioxide, otherwise known as “smog”) into the atmosphere. Achieving that goal, “assumes a rational actor seeking to implement a scientifically sensible SAI program,” write the study authors, somehow claiming it is “rational” to disperse mass pollution across the atmosphere of your own planet. The same authors also claim this program must be conducted, “purely out of humanitarian and environmental considerations.”

Shocking realization: This is terraforming planet Earth to collapse the global food supply and kill off humans

In considering the sheer lunacy of the “Stratospheric Aerosol Injection” plan, I feel compelled to state that these climate change / global warming scientists are dangerously insane sociopaths and they must be stopped before they murder us all. These lunatics, if given enough government funding, will literally murder our planet and destroy human civilization. Such is the cost of the decades of false propaganda in our public schools that has brainwashed children into believing “climate change” is real and must be halted. The schemes now being proposed to halt this non-existent problem will, themselves, bring about the global destruction that children are being warned about with global warming.

This global pollution / terraforming program, if allowed to continue, could unleash the following devastating consequences, especially if deployed at a time when the sun is in its own dimming cycle that would accelerate global cooling.

#1) Global collapse of food crops – The reduction in solar radiation caused by geoengineering, combined with the natural cycle of global cooling from sun cycles, could produce a sharp reduction in food crop production across the globe. This would result in increased food prices and reduced food supplies, adding to vectors for civil unrest and “climate refugees” invading First World nations to escape starvation.

#2) Global rise in cancer from vitamin D deficiency – Reduction in solar radiation reaching the surface of the planet would exacerbate vitamin D deficiencies that already strongly contribute to cancer fatalities around the world. Sunlight is currently the primary source of vitamin D for billions of world citizens. Dimming the sun would be a death sentence for millions each year who would suffer the dire consequences of chronic vitamin D deficiencies.

#4) Massive loss of habitat and ecosystems due to decreased sunlight and colder temperatures – Entire ecosystems — such as rainforests — could be devastated by a pollution-initiated drop in solar radiation. Marine ecosystems also rely heavily on solar radiation to power the photosynthesis of ocean plants such as seaweeds, grasses and algae, which serve as a pillar food source for the entire marine food web. Dimming the sun would have devastating consequences for all ecosystems on the planet, resulting in a catastrophic loss of life, habitat and eco-diversity.

#5) Huge increase in global acid rain that will devastate forests and food crops – The mass injection of SO2 into the atmosphere will result in SO2 being dispersed into lower levels of the atmosphere over time. There, mixed with rain storms, it will create sulfurous acid, otherwise known as acid rain. This acid rain will devastate forests and food crops and result in the acidification of crop soils, destabilizing soil microbes and leading the widespread crop losses.

#6) Decreased plant production of oxygen that’s necessary for humans, primates and mammals to survive – Nearly all plants depend on solar radiation for photosynthesis, which uses CO2 as a “fuel” and produces oxygen (O2) as a byproduct. Reducing solar radiation through chemtrails pollution would reduce the production of oxygen by plants, resulting in a global fall in atmospheric oxygen levels, ultimately leading to the mass asphyxiation of humans, primates and mammals if allowed to continue. Even the EPA (see source below) admits that SO2 interferes with human respiration and makes it difficult for people to breathe.