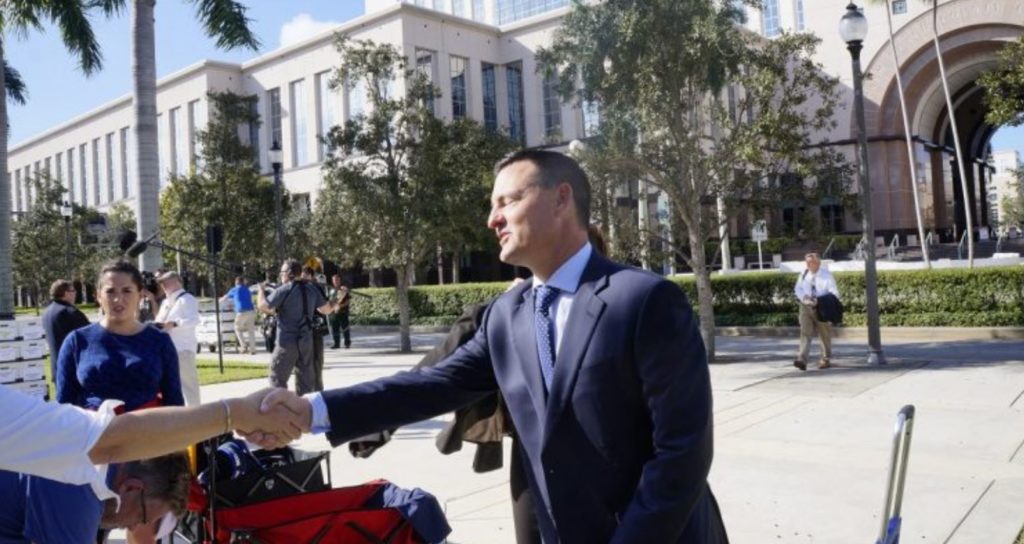 Jeffrey Epstein has agreed to a financial settlement and issued an apology to Bradley Edwards, the attorney representing several of Epstein’s victims.

West Palm Beach, Florida – Jeffrey Epstein has apologized for filing a malicious lawsuit against attorney Bradley Edwards. The apology and a confidential financial settlement officially bring an end to the lawsuit which was peripheral to the larger fight to hold Jeffrey Epstein accountable for the dozens of young girls he molested. Edwards has been representing three female victims of Epstein for nearly a decade.

The settlement relates to an ongoing legal battle between Epstein and  Edwards. In 2008, Edwards successfully sued Epstein on behalf of women who claimed he abused them. All of the women were teenagers at the time. Epstein would later counter sue claiming that Edwards was bringing Epstein to court as part of some type of Ponzi scheme. The suit would eventually be dropped, but Edwards returned the gesture by suing Epstein for defamation of character.

The following statement was released by Epstein via his lawyers:

While Mr. Edwards was representing clients against me, I filed a lawsuit against him in which I made allegations about him that the evidence conclusively proves were absolutely false. The truth as that his aggressive investigation and litigation style was highly effective and therefore troublesome for me. The lawsuit I filed was my unreasonable attempt to damage his business reputation and cause Mr. Edwards to stop pursuing cases against me. It did not work. Despite my best efforts, he continued to do an excellent job for his clients and, through his relentless pursuit, held me responsible. I am now admitting that I was wrong and that the things I said I to try to harm Mr. Edwards’s reputation as a trial lawyer were false. I sincerely apologize for the false and hurtful allegations I made and hope some forgiveness for my acknowledgement of wrongdoing. During a press conference following the settlement announcement, Bradley Edwards and his counsel Jack Scarola stood in front of boxes of files related to the case against Epstein and pictures of Epstein’s vehicles, homes, and planes. “We thought it important, so you could see, what a decade’s worth of legal work looks like,” Scarola stated. “What has gone into the prosecution of this case in order to resist an army of legal superstars.”

Although the suit was not directly related to the crimes of Epstein, Edwards’ attorneys were expected to call some of Epstein’s victims as witnesses to corroborate the validity of the original claims against Jeffrey Epstein. However, during the press conference, Edwards noted that the court was wary of allowing the trial to turn into a battle over Epstein’s sexual crimes. Now that Epstein has apologized the focus will shift back to Edwards and Scarola’s efforts to have Jeffrey Epstein’s original Non-Prosecution Agreement – or “sweetheart deal” – overturned. If a federal judge does overturn the deal, Epstein could be liable for further lawsuits and trials.

Please stay tuned for further updates on the crimes of Jeffrey Epstein.

The mainstream media’s sudden interest in the crimes of Jeffrey Epstein comes as a result of an in-depth investigation published by the Miami Herald. The Herald’s investigation was itself published just one week before Epstein’s latest civil trial is set to begin in Palm Beach, Florida. The investigation repeated what many in the independent media have been reporting for years: In 2008, Jeffrey Epstein was accused of participating in sexual acts with young girls by at least 40 women before he was given a sweetheart deal by the U.S. government which allowed him to avoid spending the rest of his life in bars. Some of the girls also accused Epstein and his high-profile associates of organizing sex parties where young girls would be raped and abused.

Epstein was offered a non-prosecution agreement which allowed him to plead guilty to the lesser charge of soliciting a minor for prostitution and soliciting prostitution. He was ordered to pay multi-million dollar settlements to victims and sentenced to 18 months in jail, of which he only served 13.Epstein was allowed to stay in the Palm Beach County Jail in his own private cell where he was allowed to leave the prison six days a week for “work release”. Epstein was forced to register as a sex offender for life, but with his money and his connections he doesn’t seem too bothered. He currently resides on his private island in the Virgin Islands.