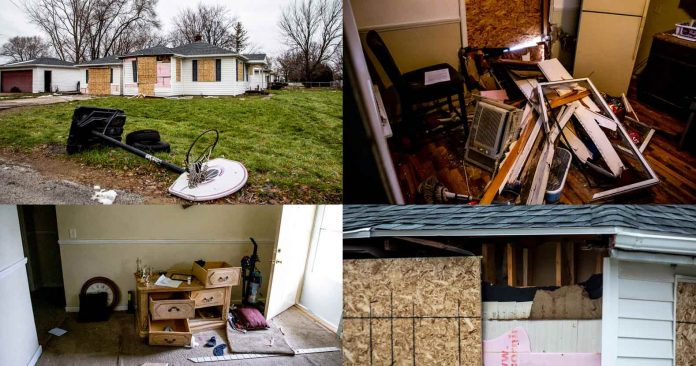 Buena Vista Twp, MI — If police think there is a bad guy in your home, they can and smash out windows, kick in doors, and even rip walls completely off. Even when this alleged bad guy is not in the home, police can and will destroy it anyway. Crystal Thomas just learned this fact the hard way—and just before Christmas, she is now homeless.

Last Friday, police executed a search warrant at Thomas’ home looking for her 16-year-old son who was suspected of robbing a store. The execution of the search warrant consisted of smashing in all the windows, tearing off doors, kicking in window units, ripping walls off, and destroying furniture. Cops even smashed the basketball goal outside the home—just for good measure.

“They made sure I could not live in my home,” said Thomas, who is now homeless along with her three other children.

Thomas said when police notified her of the search warrant and detained her on her way home, she offered to cooperate fully, going so far as to offer them a key. She explained to the officers that she had not seen her son since he became defiant.

When her son called, Thomas told him to turn himself in and she offered to let police into her home to show them he was not there.

“They got the same info from me and my kids,” she said.

Even though Thomas and all of her children told the SWAT team that her son was not in the house, officer safety trumped logic and reason—and, apparently, a roof over a family’s head.

“They said they can’t do it like this because there are precautions,” she said. “I didn’t know the precautions would be all of this.”

The “precautions” consisted of all but tearing the home completely down and then sending in a robot to find that no one was in the home. It looked like a tornado had come through.

Now, as Thomas struggles to find a place to live just before Christmas, police tell her that it is up to her to try and recover her losses.

Kaiser called the incident unfortunate, “especially with the holidays coming.”

“It’s not her fault that her son made some bad decisions,” Kaiser said, ignoring the fact that it was police who destroyed her home not her son.

Sadly, police destroying homes looking for non-existent suspects happens more than people think. As TFTP previously reported, Cherokee County Sheriff David Groves and his heroic team of militarized storm troopers descended on the home of a single mom and her five kids in Galena, Kansas just before Christmas in 2015.

Upon removing the mother and her five children from the house, police entered into a 20-hour-long standoff — with the empty house.

After not breaking things or killing anyone for 19 hours, the officers became restless, said to hell with the Sheriff’s strategy of waiting for him to come out, and proceeded to storm the home.

A SWAT truck with a battering ram attached was used to poke holes and tear apart the house in an attempt to drive the nonexistent suspect out. As deputies became unable to find him, they began taking their frustration out on couches, beds, lamps, clothing, toys, and even the family’s Christmas tree was ripped through a window and smashed to bits.