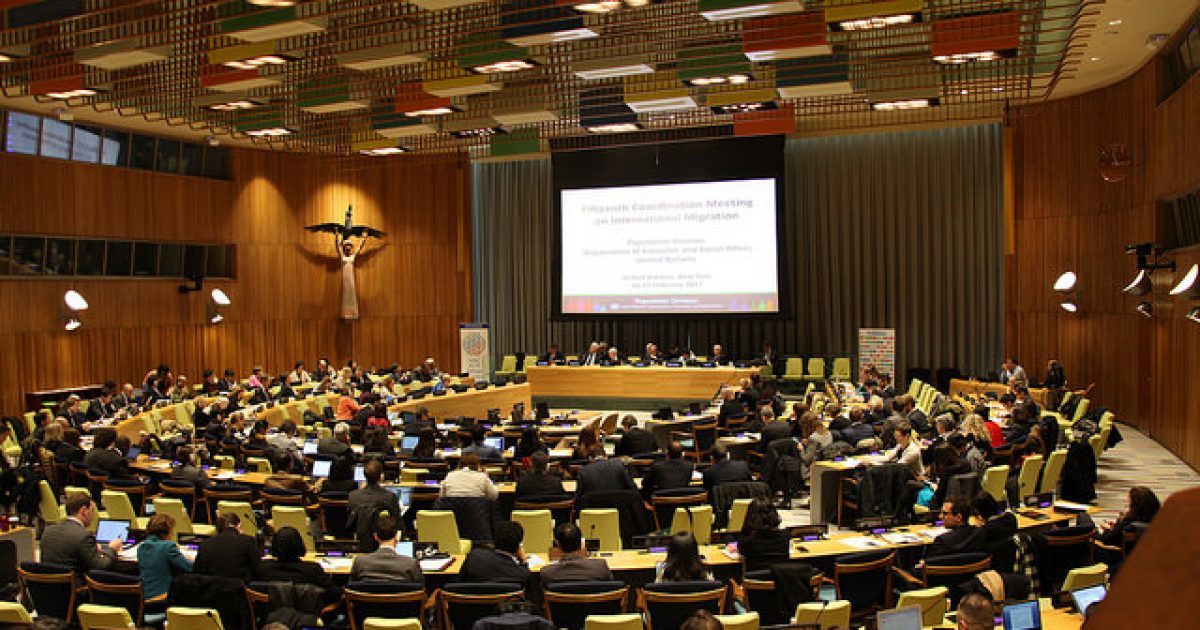 In a previous article at Freedom Outpost, a passing mention of the UN Intergovernmental Conference on the Global Compact for Safe, Orderly, and Regular Migration to be held in Marrakesh, Morocco, on December 10-11, 2018, was made.  While checking alternative news media sites to get the daily fix on news, Infowars.com through the “War Room” reported on this “conference” and what it means for the united States and Europe.  Apologies if this is a long read, but it is too important not to relay to readers.

According to the UN site, this intergovernmental conference is being held to adopt the tenets contained in the Global Compact for Safe, Orderly, and Regular Migration.  Before delving into the document and what some of it means, the UN, through its “refugee and asylum” protocols determined that individuals seeking refuge and/or asylum should apply to the first country entered upon emigration from their home nation.  It is essential the MENA (Middle East North Africa) countries cooperate and act as an “illegal invasion blocking curtain” for Europe to stop massive swaths of individuals from not only illegally crossing their borders, protecting their sovereignty, but act in a cooperative manner to assist European nations to protect their sovereignty.  In the same manner, Mexico should not allow illegal alien invaders from Guatemala, Honduras, and El Salvador to traverse through unimpeded with impunity to enter the US, but cooperate with the US to protect its sovereignty as well as assist the US in keeping out illegal alien invaders.  However, the status quo is to allow massive invasion size forces of individuals to wander through “illegal invasion blocking curtain” nations thereby aiding the invasion force to enter Europe and the US as well.

In summation, the purpose of this “global compact” boils down to open borders among all world nations.  Referencing the document, looking under Shared Responsibilities, item number 11 states, “This Global Compact offers a 360-degree vision of international migration and recognizes that a comprehensive approach is needed to optimize the overall benefits of migration, while addressing risks and challenges for individuals and communities in countries of origin, transit and destination. No country can address the challenges and opportunities of this global phenomenon on its own. With this comprehensive approach, we aim to facilitate safe, orderly and regular migration, while reducing the incidence and negative impact of irregular migration through international cooperation and a combination of measures put forward in this Global Compact. We acknowledge our shared responsibilities to one another as States Members of the United Nations to address each other’s needs and concerns over migration, and an overarching obligation to respect, protect and fulfil the human rights of all migrants, regardless of their migration status, while promoting the security and prosperity of all our communities.” [Emphasis Mine.]

I said it some time ago, but I’ll say it again.  The UN changed the terms of illegal alien invasion/ illegal immigration to migration in order to brainwash people into accepting that crossing of nations’ borders by illegal alien invaders does not violate immigration law enacted by the sovereign nation.  Now, the UN is using “regular” migration and “irregular” migration;  however, it doesn’t provide the definitions for “regular migration” and “irregular migration.”  One can bet that sovereign nations stand to lose big time on this compact should some idiot from these world nations sign on to this power grab by the UN.  Moreover, the entire tone of the 31-page document reeks of “move over citizen, bow to the illegal alien invasion.”  The wording strongly supports illegal alien invaders at the expense of citizens.

But, the purpose of this statement is to convey the illusion that nations experiencing illegal alien invasion need the help of other nations or the UN to facilitate entry by illegal invasion forces and access to programs designed to support them.  It is designed to open the door for UN forces to invade sovereign western nations to control the movement of illegal alien invaders into nations and call it “regular migration” or “irregular migration”; while the key take away word is “migration.”  Moreover, it is designed to counter the notion of sovereignty even though the document claims recognition of national sovereignty further in.

Pointedly, it actually works to place the UN in charge of “illegal alien invasion” to all countries if the country has a representative dumb enough to sign onto this piece of garbage.

Reading Section 12 of the document establishes the intention of the compact to “reduce the risks and vulnerabilities migrants face at different stages of migration by respecting, protecting and fulfilling their human rights and providing them with care and assistance.”  It’s easy to spend other nations’ money.  The UN has perfected it since its creation, particularly the money flowing from US taxpayers.  This section obligates nations who sign on to this nightmare to provide illegal alien invaders with “care and assistance” while “respecting, protecting and fulfilling their human rights ….”  Unfortunately, idiots at the UN cannot understand that individuals not born within the borders of the nation they seek to enter do not possess the “right” to cross borders illegally nor have the right to demand others provide them “care and assistance.”

It gets even better looking at Unity of Purpose.

We must save lives and keep migrants out of harm’s way. We must empower migrants to become full members of our societies, highlight their positive contributions, and promote inclusion and social cohesion. We must generate greater predictability and certainty for States, communities and migrants alike. To achieve this, we commit to facilitate and ensure safe, orderly and regular migration for the benefit of all.

Who is the UN kidding here?  These illegal alien invaders, purported to be refugees that should return to their country of origin when conditions are safer, are being considered “permanent” invaders;  “We must empower migrants [not refugees or illegal invaders] to become full members of our societies [as they cross the border waving their home country flag], highlight their positive contributions [provide more work for local governments to clean up trash, poop, and other refuse], and promote inclusion and social cohesion [anyone wanting that from the citizens of the entering nation should apply to enter legally].

Notice how the UN places all the responsibility on the country of entry and its citizens to “bend over backwards” or “bend over and grab your ankles” for individuals who lack respect for the laws of other nations, the citizens who support the governments in that nation, and the citizens in that nation who are living in poverty and/or are homeless.  But, what else can one expect from an organization where communist/socialist/Marxist, Islamic and brutal dictatorships outnumber free nations by a large majority.

Moreover, the UN considers this “compact” that requires nation participants in this compact to marginalize its own citizens as a “win-win cooperation.”  Of course, the UN declares this compact is non-legally binding and “reaffirms the sovereign rights of States to determine their national migration (immigration) policy.”  But, with the change in terminology by the UN, immigration becomes migration which is a misnomer because countries have borders.

Hidden in this gem of disgust is the UN Agenda 2030 dubbed “Sustainability.”  This is another way of the UN trying to sneak in the push for nations to deny citizens rights in favor of “migrants” aka illegal alien invaders, claiming that “migration contributes to positive development outcomes and to realizing the goals of the 2030 Agenda for Sustainable Development ….”   The UN is nothing more than a world global ruling oligarchic organization.