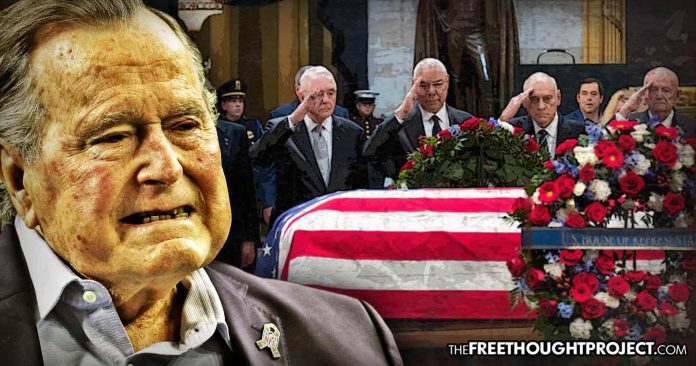 On November 30, at the age of 94, George H.W. Bush, the 41st president of the United States, passed away. His death set off a fury of media coverage, special events, ceremonies, government holidays, and eventually his burial on Thursday.

According to estimates, the paid holiday for federal workers alone — including Congress and the U.S. Postal Service — could cost taxpayers a half billion dollars. Yes, that is billion, with a ‘b’. This does not include the militaristic displays, flyovers, security, operating Air Force One at $200,000/hour, secret service for the high profile political attendees, or police overtime.

Americans are being robbed of a half billion in tax dollars to celebrate a mass murdering warmonger whose legacy is drenched in the blood of innocent civilians. And the mainstream media is painting him up as a hero.

“George HW Bush systematically attacked the civilian infrastructure in Iraq. He turned hospitals into death rows for infants. He widely used depleted uranium, causing cancer rates to skyrocket. He made Iraq a mass graveyard. And the killing hasn’t stopped since,” the Intercept journalist Jeremy Scahill wrote on Twitter. “I remember feeling a deep sense of shame and anger when I visited the Amiriyah shelter in Iraq. George HW Bush killed more than 400 civilians huddled there on February 13, 1991. These are the crimes we should be discussing today.”

Sadly, however, these are not the crimes we are discussing today. In fact, we aren’t discussing any crimes. Instead, every television station, radio frequency, and mainstream media website has been bowing at the alter of George H.W. Bush, cramming horse manure into the faces of Americans as both liberals and conservatives alike, eat it up.

While the political establishment and the mainstream media have been praising and celebrating a mass-murdering criminal, far more important stories have been ignored. The Free Thought Project has chosen a list of the most important stories the media has ignored this week while distracting Americans with their unwavering worship of tyrants. Below is this list.

Kicking off the list at number 1 is the story that the media seems hell bent on ignoring.

Bush was a man “of the highest character,” said his son and fellow former president, George W. Bush. “He loved America and served with character, class, and integrity,” tweeted former U.S. Attorney and #Resistance icon Preet Bharara. According to Barack Obama, Bush’s life was “a testament to the notion that public service is a noble, joyous calling. And he did tremendous good along the journey.” Apple boss Tim Cook even weighed in and said: “We have lost a great American.”

While they praised Bush for opening charities and his legacy as president, the media conveniently ignored the fact that Dubya’s daddy slaughtered women and children in Iraq in the 90’s.

Just like his criminal son, this “great American” lied about weapons of mass destruction to invade and occupy Iraq. During his presidency, he committed war crimes, dropping 88,500 tons of bombs on Iraq which resulted in the utter slaughter of thousands of innocent civilians. According to Human Rights Watch, these attacks were “a serious violation of the laws of war.”

It was George Bush Snr. who ordered the bombing of the “Highway of Death” in 1991. The death toll remains unknown. Robert Fisk, the journalist, said he “lost count of the Iraqi corpses crammed into the smoldering wreckage or slumped face down in the sand”. pic.twitter.com/Fj8cnC4aAi

But fret not, free world, this great American “served” his country proudly and is a hero and advocate of freedom—according to your television.

2. Billionaire pedophile Jeffrey Epstein was exposed once more and was then swept right back under the rug

As TFTP reported last week, in a bombshell report out of the Miami Herald, Epstein’s ties to the past administrations—as well as the current one—were laid out for the world to see. Instead of ignoring it, like they usually do, this time, mainstream media outlets like CNN picked up the story and ran with it. Even the royal family’s ties to the billionaire pedophile would see coverage in the media once more.

For a brief moment, those who have been attempting to hold Epstein accountable for his crimes against children thought they may see justice. As news of the trial began to gather some steam however, just like that, this billionaire threw an untold sum of money at his victims, effectively silencing them all. Truth and justice be damned.

3. The federal government acknowledged the possibility that explosives were used to destroy WTCs on 9/11

In what can be described as a monumental step forward in the relentless pursuit of 9/11 truth, a United States Attorney has agreed to comply with federal law requiring submission to a Special Grand Jury of evidence that explosives were used to bring down the World Trade Centers.

After waiting months for the reply, the U.S. Attorney responded in a letter, noting that they will comply with the law. According to the report:

The Lawyers’ Committee’s April 10th 52-page original Petition was accompanied by 57 exhibits and presented extensive evidence that explosives were used to destroy three WTC buildings. That evidence included independent scientific laboratory analysis of WTC dust samples showing the presence of high-tech explosives and/or incendiaries; numerous first-hand reports by First Responders of explosions at the WTC on 9/11; expert analysis of seismic evidence that explosions occurred at the WTC towers on 9/11 prior to the airplane impacts and prior to the building collapses; and expert analysis by architects, engineers, and scientists concluding that the rapid onset symmetrical near-free-fall acceleration collapse of three WTC high rise buildings on 9/11 exhibited the key characteristics of controlled demolition.

4. Hundreds of thousands of French citizens took to the streets to protest a tax on fuel and they won

A grassroots movement made up of citizens who have become fed up with the political establishment in France has been growing since early November and it came to a head this week. The movement, known as “gilets jaunes” or “yellow vests” began as an anti-tax protest but then merged folks from the left and the right into a much broader anti-government protest.

The protest was so successful that on Tuesday, French Prime Minister Edouard Philippe announced a six-month suspension of the fuel tax which triggered the unrest.

The French government will suspend the fuel tax rise for six months to calm down the Yellow Vest protests, Prime Minister Edouard Philippe said in a televised speech on Tuesday.

The people flexed their power and the people won.

5. A police officer in Colorado got off with a 90-day sentence for the kidnapping and brutal rape of a mentally unstable woman

It should come as no surprise, to those who’ve been paying attention, that the media celebrates mass-murderers like Bush. The United States has a dirty little secret that most people ignore and it’s that they utterly fail at holding corrupt and criminal members of the government accountable.

Curtis Lee Arganbright, a Westminster police officer is one of these criminal members. In 2017, Arganbright took a mentally unstable woman from a hospital, handcuffed her, drove her down a dark road, and proceeded to rape her—while still in the handcuffs—on the hood of his patrol car.

Instead of felony charges for sex assault by force, sex assault by a person in a position of authority and false imprisonment, the officer reached a plea deal with prosecutors to plead guilty to lesser misdemeanors of unlawful sexual contact and official misconduct. As a result of the sweetheart deal, Arganbright now only has to serve 90 days in jail followed by four years probation, and has to register as a sex offender.

A travesty of justice, indeed.

Remember, as the country “comes together” today to hold a $500,000,000 funeral for a mass-murdering criminal, at your expense, all while the media tells you to worship him— there are real stories happening all around you that the media is manipulating and hiding—so when the next former president dies, we all go back to sleep and repeat this same dog and pony show all over again.