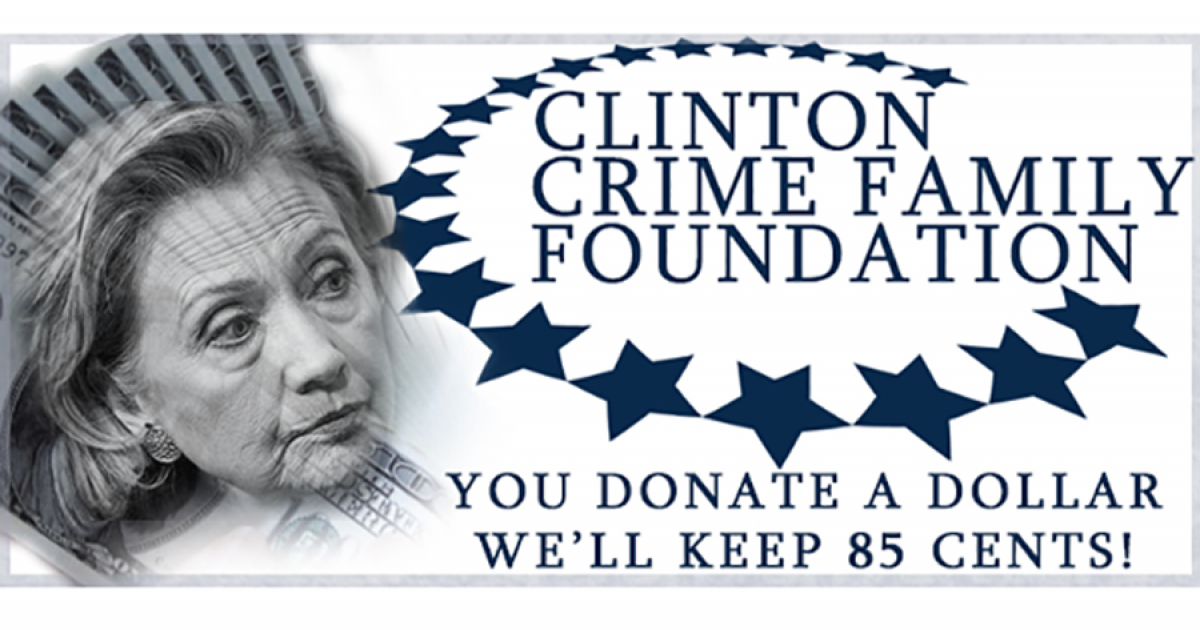 On Friday, I reported on the arrest of Huawei Chief Financial Officer Meng Wanzhou in Canada and what a possible extradition to the US might mean for Bill and Hillary Clinton since there are clear ties between Huawei and the Clintons going back to the mid-1990s.  Now, the CFO of the Clinton Foundation has apparently spilled the beans to the FBI and the IRS regarding the corruption of the Clintons saying, “I know where all the bodies are buried.”

Clinton Foundation CFO Andrew Kessel told investigators that the Clinton Foundation had been corrupt for some time and that they had enormous conflicts of interest, problems with their accounting and that Bill Clinton had specifically comingled business and personal expenses.

MDA Analytics LLC, a firm run by “accomplished ex-federal criminal investigators,” have been investigating the Clinton Foundation for some time.  Kessel, believing he was  “meeting an old professional acquaintance,” informed them about the corruption.

John Solomon at The Hill reports:

When a House subcommittee chairman bangs his gavel next week to convene an unprecedented investigative hearing into the Clinton Foundation, two questions will linger as preeminent: Is the Clinton family charity really the international do-gooder that earned a perfect four-star rating from Charity Navigator, or does it suffer from corruption and illegalities as conservatives allege? And if it is the latter, how much evidence of wrongdoing does the government possess?

The answer to the first question is that the foundation and its projects reported collecting about $2.5 billion to help global crises, from AIDS to earthquakes, even as its own auditors, lawyers and employees privately warned of problems over the years.

The answer to the second question may reside in 6,000 pages of evidence attached to a whistleblower submission filed secretly more than a year ago with the IRS and FBI.

That evidence was assembled by a private firm called MDA Analytics LLC, run by accomplished ex-federal criminal investigators, who alleged the Clinton Foundation engaged in illegal activities and may be liable for millions of dollars in delinquent taxes and penalties.

In addition to the IRS, the firm’s partners have had contact with prosecutors in the main Justice Department in Washington and FBI agents in Little Rock, Ark. And last week, a federal prosecutor suddenly asked for documents from their private investigation.

The 48-page submission, dated Aug. 11, 2017, supports its claims with 95 exhibits, including internal legal reviews that the foundation conducted on itself in 2008 and 2011.

Those reviews flagged serious concerns about legal compliance, improper commingling of personal and charity business and “quid pro quo” promises made to donors while Hillary Clinton was secretary of State.

The submission also cites an interview its investigators conducted with Andrew Kessel that quotes the foundation’s longtime chief financial officer as saying he was unable to stop former President Clinton from “commingling” personal business and charitable activities inside the foundation and that he “knows where all the bodies are buried.”

“There is no controlling Bill Clinton. He does whatever he wants and runs up incredible expenses with foundation funds,” according to MDA’s account of the interview. “Bill Clinton mixes and matches his personal business with that of the foundation. Many people within the foundation have tried to caution him about this but he does not listen, and there really is no talking to him.”

Solomon also noted previously this year, that the Clintons were being investigated by the Little Rock FBI field office for pay-for-play schemes and tax code violations.

The officials, who spoke only on condition of anonymity, said the probe is examining whether the Clintons promised or performed any policy favors in return for largesse to their charitable efforts or whether donors made commitments of donations in hopes of securing government outcomes.

The probe may also examine whether any tax-exempt assets were converted for personal or political use and whether the Foundation complied with applicable tax laws, the officials said.

“There is probable cause that the Clinton Foundation has run afoul of IRS rules regarding tax-exempt charitable organizations and has acted inconsistently with its stated purpose,” MDA alleged in its memo.

“The Foundation should be investigated for all of the above-mentioned improprieties,” MDA added.  “The tax rules, codes, statutes and the rule of law should and must be applied in this case.”

The IRS has also been investigating the Clinton Foundation for more than two years due to letters received from representatives calling for an investigation, but that hasn’t gotten much press coverage.  The Dallas Observer has a lengthy report on that from November 2016, which you can read here.  In that report we read:

The case against the Clinton Foundation is multifaceted. One common attack is that the foundation has overextended its original mandate. “The Foundation’s original application to the IRS in 1997 advised that it was formed to construct a library, maintain a historical site with records, and engage in study and research,” said Tennessee Republican Rep. Marsha Blackburn in an email to the Observer. “It did not indicate an intent to conduct activities outside of the United States, which was on one of the codes included in the IRS ‘Application for Recognition for Exemption’ in effect at the time. This would appear to prohibit much of the overseas work the Foundation has performed.”

This overseas growth is true, but maybe not as damning as it sounds. Many charities shift focus over time, although most nonprofit groups will reach out to make sure the IRS has no problem with new international work. This is smart because the TE/GE folks have a slate of specific questions for the people handing over U.S. charity money to recipients in other countries, something tax wonks call “expenditure responsibility.” Any charity would be wise to know the rules before diving in.

The Clinton Foundation didn’t reapply for its status as a nonprofit group, but they haven’t run afoul of IRS laws governing distribution of charity money. “It’s not like they filed their application and then never told the IRS anything after that,” Stoltz says. “The division reads the tax returns, it’s sort of like filling out a new application each year.”

So the failure to update an application to include international work is not a smoking gun of nonprofit malfeasance, but there are other places the foundation is more at risk.

Most IRS reviews aim to discover if nonprofit officials and members are enriching themselves with the money raised for charity. Spending money on staff salaries and lavish events are common nonprofit pitfalls. If the board of directors knew of the abuses, they too could be violating the law.

In the case of the Clinton Foundation, it’s not exactly a matter of stealing from the cookie jar. The bookkeeping — with documents available for public as well as IRS scrutiny — appears sound since the IRS has not raised any red flags. The foundation spends a solid 88 percent of its money on actual programs, according to the group Charity Tracker.  That’s pretty good ratio of overhead to actual charity work.

But the Clinton Foundation problem is more nebulous. The central question is not exactly one the IRS can easily track: Did the founding members trade influence for donations, especially while Hillary Clinton was secretary of State?

MDA spent its own money to investigate the Clinton Foundation because they believed that due to the whistleblower submission they put together, the organization might garner a government reward if the IRS was able to act on their finds and recover tax dollars.

The IRS sent multiple letters in 2017 and 2018 to MDA Analytics, confirming it had received the submission and it was “still open and under active investigation.” But, shortly before last month’s election, the agency sent a preliminary denial letter indicating it did not pursue the allegations for reasons that ranged from a lack of resources to possible expiration of the statute of limitations on some allegations.

I asked a half-dozen former federal investigators to review the submission and key evidence; all said the firm’s analysis of tax-exempt compliance issues would not be that useful to federal agencies that have their own legal experts for that. But they stressed the evidence of potential criminality was strong and warranted opening an FBI or IRS probe.

While Foundation officials admit that Kessel admitted attending a meeting with the investigators, they claim that it was not to inform them of criminal activity nor was it assuming they were investigators.

Those officials would not say what they believe the content of the conversation was about, except to say that

Kessel “strongly denies that he said or suggested that the Clinton Foundation or President Clinton engaged in inappropriate or illegal activities.”

“Mr. Kessel believed he was meeting an old professional acquaintance who was looking for business from the Foundation,” the foundation said in a statement.

The comments attributed to Kessel track closely to statements employees and executives of the foundation made during the 2008 and 2011 internal legal reviews.

For example, the 2008 review written by a private lawyer named Kumiki Gibson, who was hired by the foundation to study its governance, directly flagged concerns about improper commingling of charitable and private business.

“The work of the Foundation and the President are intertwined in a way that creates confusion at, and undermines the work of, the Foundation at virtually every level,” Gibson wrote, warning that such commingling poses “reputational and legal challenges, and with confusion, inefficiencies and waste.”

Specifically, the memo warned the foundation had not created policies and procedures “required by law” and that some of its leaders “appear to have interests that do not always align with those of the Foundation.”

It also raised the possibility of illegal activities, saying the foundation and its managers held an “anti-compliance attitude” and that there were lower-level employees who “begged” for whistleblower protections after witnessing “less than fully compliant behavior or even worse are asked to participate in or condone it.”

This week, John Huber, US attorney designated a year ago by then-Attorney General Jeff Sessions to investigate “all things Clinton,” requested copies of the evidence compiled by MDA.  MDA informed him that the FBI had been in possession of the evidence since early 2018, according to Solomon.

Yes, that’s the same FBI that failed to encourage the DOJ to indicate Mrs. Clinton for her illegal email server.

Solomon’s article indicates that there are several witnesses, including attorneys outside MDA, that parallel Kessel’s statements regarding the shadiness of the Clinton Foundation.

We’ll see how things turn out this week during congressional hearings on the subject with the DOJ.