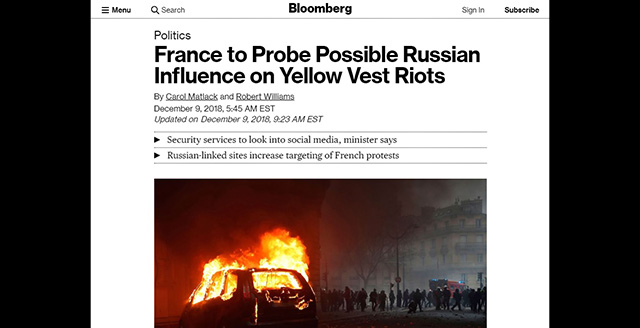 If the last two years have taught us anything, it’s that Western governments can dodge all responsibility for their failed leadership by blaming all domestic strife on the Russkies.

France opened a probe into possible Russian interference behind the country’s Yellow Vest protests, after reports that social-media accounts linked to Moscow have increasingly targeted the movement.

According to the Alliance for Securing Democracy, about 600 Twitter accounts known to promote Kremlin views have begun focusing on France, boosting their use of the hashtag #giletsjaunes, the French name for the Yellow Vest movement. French security services are looking at the situation, Foreign Minister Jean-Yves Le Drian said Sunday in a radio interview with RTL.

Russia has been criticized for using social media to influence elections in the U.S. and elsewhere. Attempts to use fake news reports and cyberattacks to undercut the 2017 campaign of French President Emmanuel Macron failed, but Russian-linked sites have pushed questionable reports of a mutiny among police, and of officers’ support for the protests.

The media is furious Russian media is covering these protests. There was supposed to be a blackout to help Macron put these rioters down like dogs! It was only around two weeks ago when the media was hyperventilating over Trump “gassing children” on our border in a repeat of the Holocaust. While Trump was attacked for using tear gas on foreign invaders, Macron’s army firing off some 10,000 tear gas canisters — so many canisters they reportedly nearly ran out — is “defending liberal democracy!”

The Twitter accounts monitored by the alliance usually feature U.S. or British news. But the French protests “have been at or near the top” of their activity for at least a week, according to Bret Schafer, the alliance’s Washington-based social media analyst. “That’s a pretty strong indication that there is interest in amplifying the conflict” for audiences outside France.

The Alliance for Securing Democracy is a unit of the German Marshall Fund of the U.S., which monitors pro-Kremlin activity.

The assertion of police dissatisfaction — which doesn’t appear to be supported by facts — resembles other Kremlin-backed disinformation campaigns that have tried to engender mistrust in Western governments and show that liberal democracies are in decline, Schafer says.

Just ignore the fact liberal democracies are in decline the world over — they’ve actually never been stronger! 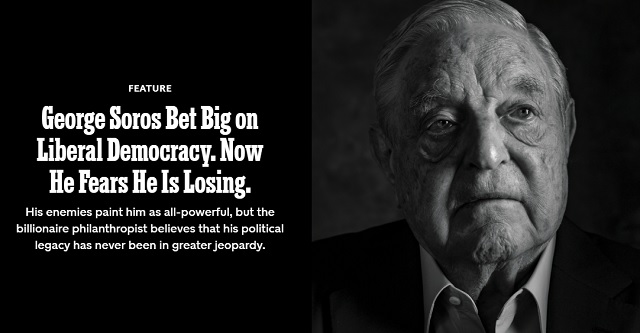 The “Alliance for Securing Democracy” and their entirely fraudulent Hamilton 68 dashboardwas started by Bill Kristol, CIA officials and other Democrat neocons and they refuse to identify any of the alleged “Russian trolls” they claim to be tracking.

Any “journalist” who cites their dashboard as a legitimate source is not a journalist but a government propagandist.

The future our “liberal” rulers want is one where all non-establishment media is censored into oblivion and all popular revolts against their rule are pawned off on the Russkies.

Everyone you see in these videos are just Russian bots.

It's time we start looking at what's happening in France right now in the same context that we look at what happened in Sri Lanka and Myanmar. This was created almost entirely by Facebook. pic.twitter.com/VGWUmuy5mH

It took 10 days for a https://t.co/tOjTV0qAfH petition to go from a local news site to a network of local Facebook groups to a Facebook event to a national movement.

Now 3 people are dead and 100s more are injured and this weekend looks like it will be even more violent. pic.twitter.com/xfsmUlJ5o9

These people are insane.