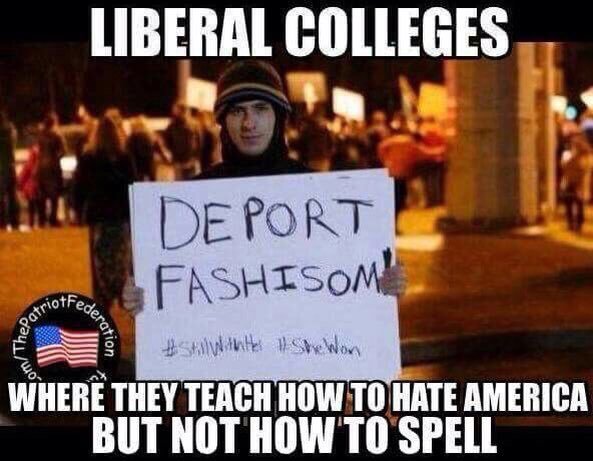 A recent poll showed that 53 percent of American teens and twenty-something’s do not respect America.  At sporting events, millions of students fail to stand for the national anthem.  In southern California, you see more Mexican flags being displayed and flown rather than the Stars and Stripes.  In Detroit, Michigan, you see the Islamic black flag with Arabic writing that Americans cannot decipher.

On social media, citizen journalists walk around asking people of all ages simple questions about America’s past and her founding fathers.

Not one of them knew George Washington’s name.  One guessed, “Barack Obama.”

“Who fought who in America’s Civil War,” asked one.

Out of six people, five didn’t know we fought a Civil War to free the black slaves.  One answered, “Vietnam in the 60’s.”

Today in America, while millions of third world people wait in line to migrate to America or crash our borders, we see a national angst of young people disrespecting our flag, our history and our Constitutional Republic.  Dozens of organizations work to dismantle the U.S. Constitution:  for Muslims in Council for American Islamic Relations, for Mexicans La Raza, for American-blacks  “Black Lives Matter.”  All of them “hate” America with a Capital “H”.  You can find another two dozen such organizations on the Internet.

Eminent Journalist Heather Mac Donald interview on Sunday with Mark Levin.    She talked about her new book: THE DIVERSITY DELUSION: How Race and Gender Pandering Corrupt the University and Undermine Our Culture.  She elaborated on many concepts that apply to the diversity/immigration challenge — beyond the university.

Mac Donald noted her luck at having attended college in the 1970’s. She experienced “the beauty, the greatness and sublimity” of great works of western civilization without indoctrination in victim/oppressor ideology, which, since the 1980s, has deprived the young of a real education, given them a ‘license for ignorance’ and taught them to hate.

She said, “The 80’s was when it started. That’s when you got radical multiculturalism to hit. I was in college in the 70s. I’m very grateful for that because I was allowed to read John Milton, Williams Wordsworth and Shakespeare without anyone thinking to complain about the gonads and melanin in those authors. I got to lose myself in beauty, in greatness and sublimity. Come the 80’s and students are given a license for ignorance. They were taught that the only thing they needed to know about a book was the race and gender of the author to know whether it was thoroughly dismissible without even being read. And they could go on to instead wallow in their own delusional oppression.”

As you look around you today, at every news cast across America, you hear charges of racism.  At the same time, you hear CNN bellowing the wonders of diversity and multiculturalism.   You’ve got hosts like African-American Don Lemon imploring his audience that the biggest terrorists and threat to America are “white men.”

At the same time, a white journalist like Megan Kelly made one single comment about “black faces” during Halloween, and she discovered a pink slip in her mail box the next day and into the unemployment line.

MacDonald said, “And it is only gotten worse since then. And what we are doing is breeding the grounds for, I fear, Civil War, because students are being taught to hate, to hate the greatest works of Western civilization and, frankly to hate each other. The power elites are determined to drum into that students head identity politics which says he’s either a victim or an oppressor.”

Notice multimillionaire athletes degrading the American flag, degrading the president of the United States and creating cultural angst against other races.  The biggest word used:  racism.

“Oppressors are obviously white males, heterosexual white males. The only way they can get out of their oppressor category is to become an ally of the oppressed,” said MacDonald.  “The most preposterous delusion of all of this is students actually believe that they are at risk of their lives from circumambient racism and sexism on a college campus.”

You’re seeing it play out all the way down into pee wee team sports.  Kids as young as 12 repeat the disrespect of their favorite sports hero such as basketball star LeBron James.

You see it in the disrespect of new United States House of Representatives member Rashida Tlaib from Michigan swirled the Palestinian Muslim flag around herself after winning a seat in Congress.

I venture to state emphatically that not one African-American would choose to return to his or her homeland in Africa, yet House Member John Lewis, (D-GA) condemns America every time he stands in front of a microphone.

I am a few years older than Heather MacDonald, but I see the same things developing in our country.  We’re fragmenting ourselves with endless immigration and multiculturalism that cannot be put back into the box.

Levin asked, “Where do you see this country in five or ten years?”

MacDonald said, “We are either in civil war or we’ve gotten ourselves away from the brink of civil war.”

MacDonald answered, “I absolutely do.  We’ve seen it already. We’ve seen civil violence grow — people, with impunity, with the celebration and encouragement of politicians, beating each other up . . . Antifa harassing Tucker Carlson, harassing politicians or shooting them. Again, the universities are teaching students to hate on the basis of race and gender. Unless we counter that narrative, which originates in the view that America is oppressive. Unless we fight that narrative of endemic racism, we are in civil war.”

In the past, the citizens of America were known as “the American people”, as if we were a cohesive group.  That adage degraded from 1965 with the Immigration Reform Act.   Today, we have become “everybody else’s country” and not our own.  We really need to stop legal and illegal immigration or face the angst, anger and incompatibility of adding another 100 million third world immigrants to America.

I think McDonald understands our accelerating predicament. I see terrific internal conflict that will make the California wildfires look tame.