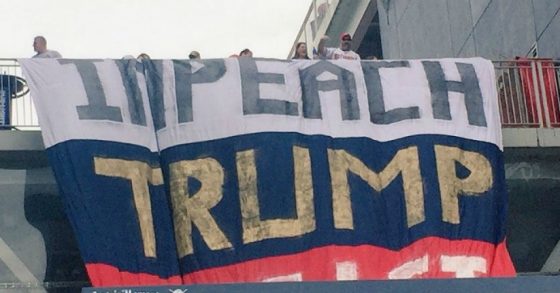 President Donald Trump commented on the possibility of impeachment on Tuesday waiving any concern at all.  He added that he believes “the people would revolt” if he is impeached.

During a White House interview with Reuters, which was Trump’s first since federal prosecutors in New York filed a sentencing memo for Michael Cohen, Trump’s former personal attorney, he commented about the possibility of impeachment. “It’s hard to impeach somebody who hasn’t done anything wrong and who’s created the greatest economy in the history of our country,” said Trump. “I’m not concerned, no. I think that the people would revolt if that happened,” he said.

Prosecutors are still on their Russian election meddling witch hunt, and many Democrats believe that with control of the House of Representative in January will come an opportunity to impeach Trump. Federal prosecutors in New York said last week that Trump directed Cohen to make six-figure payments to two women so they would not discuss their alleged affairs with the candidate ahead of the 2016 presidential election, according to Reuters.

[Prosecuters] said the payments violated laws that stipulate that campaign contributions, defined as things of value given to a campaign to influence an election, must be disclosed, and limited to $2,700 per person.

Democrats said such a campaign law violation would be an impeachable offense, although senior party leaders in Congress have questioned whether it is a serious enough crime to warrant politically charged impeachment proceedings. –Reuters

Trump’s attorney Rudolph W. Giuliani also declared in August that the “American people would revolt” against impeachment. “President Trump is completely cleared,” Giuliani said. “You’d only impeach him for political reasons.” Even though dedicated democrats believe Trump is impeachable, they have an uphill battle to actually convince a Republican-held Senate after the newly elected political elitists take control. Impeachment requires a simple majority to pass the House of Representatives, where Democrats will take control in January. But the removal of the president from office further requires a two-thirds majority in the Senate, where Trump’s fellow Republicans hold a majority still.

Investigations by special counsel Robert S. Mueller III and federal prosecutors in New York have been escalating seemingly since the 2018 midterm elections. Documents have allegedly all but named Trump as an unindicted co-conspirator who helped deceive American voters during the 2016 presidential election. (But let’s be fair: every single politician ever elected has deceived voters. It’s the only way to gain political power.  If politicians were honest and came right out and told voters the truth, it would sound more like this: “We’ll control every aspect of your life and take what little freedom you have left and steal your money to make it happen!” And if they did that, the government wouldn’t exist.