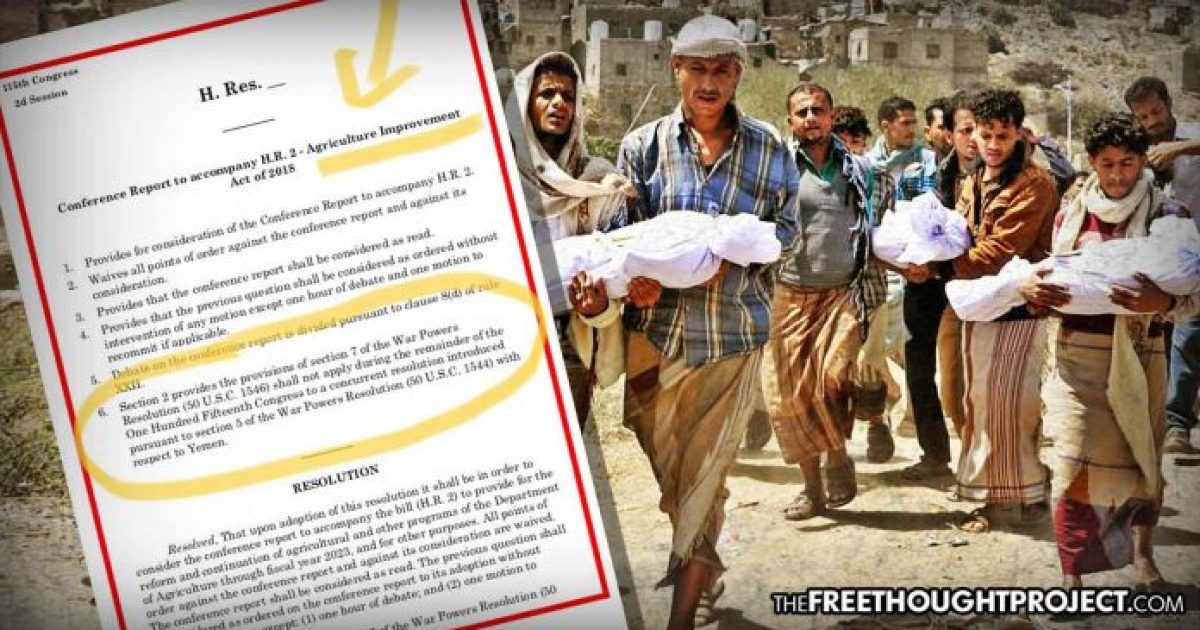 This week Congress violated the Constitution and the War Powers Act by voting to block and further moves by Congress,= to withdraw U.S. forces from the wholesale slaughter and genocide currently taking place in Yemen. This move was done using the Farm Bill.

Many Americans are wondering what, exactly, a Farm Bill has to do with genocide in Yemen. The answer to that question is absolutely nothing. However, it does make for a good hiding place for insidious and illegal legislation, which is why the Agriculture Improvement Act of 2018 contained a section which removed the application of the War Powers Resolution.

As the mainstream media reported on the government finally legalizing a plant—industrial hemp—that should have never been illegal in the first place, one of the most disgusting moves ever by Congress was carried out in the dark like cockroaches.

“To avoid a debate on whether the US should be involved in a war in Yemen, today our leadership will trick members into suspending the provisions of the War Powers Act,” tweeted representative Thomas Massie yesterday morning. “Sad!” he said. “Despicable” that House Speaker Paul Ryan “is shirking responsibility for debating our involvement in the Yemen war by hiding the war resolution in a procedural vote on the farm bill.”

Does your Congressman know what’s hidden in a procedural vote on the Farm Bill today? Does he or she care? To avoid a debate on whether the US should be involved in a war in Yemen, today our leadership will trick members into suspending the provisions of the War Powers Act. SAD! pic.twitter.com/PVziN9d2lP

In short, members of Congress voted to suspend the War Powers Act with regard to Yemen and halt any further debate on America’s support of the terrorist nation of Saudi Arabia inside the country. Insidious indeed.

However, this is the second time Congress attempted to sneak a vote for perpetual war in Yemen into entirely unrelated legislation. Last time, they hid it inside a bill about wolves.

Does the Constitution not matter? Article I gives Congress alone the enumerated, undivided power to declare war. The executive branch can only wage war. U.S. involvement in Yemen is not declared, therefore the executive may not wage this war.

Congressman Justin Amash also weighed in on the debauchery in the House by pointing out how the bill is also a massive vote for corporate welfare.

Today, the House voted to block Congress (yes, Congress blocked itself!) from attempting to withdraw U.S. forces from Yemen, and it voted to hand out billions of dollars in corporate welfare and subsidies via the so-called farm bill. I voted no. Just another day on Capitol Hill.

The current conflict in Yemen, which was manufactured as a proxy war by Saudi Arabia, targeting its bitter enemy, Iran, is America’s dirty little secret which the media refuses to question. According to a 2107 analysis from Unicef, more than 5,000 children have been slaughtered in the war, with the death toll from violence alone surpassing 10,000—as millions teeter on the brink of starvation. The number of casualties has only continued to increase since then. And, as a report from the United Nations noted, the parties involved are conducting operations “heedless of their impact on civilians.”

As The Free Thought Project has reported, the current situation in Yemen is nothing short of genocide, as there are 14 million civilians in starvation, and 19 million out of the country’s 27 million population “in need of some form of aid.” Saudi Arabia has repeatedly facilitated famine, continued to murder children, and all of it is with the help and approval of the United States.

85,000 children have already succumb to disease and famine and a child dies every 10 minutes in the country. To continue to support this war is to be complicit in genocide.

14 million people are on the brink of famine in Yemen. 85k children have already died from cholera and starvation. Our Yemen War Powers Resolution can’t wait until 2019. We must pass it now to save lives. pic.twitter.com/09huQbuw5k

The United States is aiding a genocide in a foreign country who has done nothing to us. This support has enabled the wholesale murder of thousands of innocent civilians, including children. Some of the bombs that were dropped targeted hospitals, weddings, and even school buses.

Sadly, this slaughter shows no signs of slowing and is arguably getting worse, especially now that Congress can no longer debate it.

Only a few weeks into his presidency, Donald Trump made clear his policy of continuing the annihilation and genocide of the citizens of Yemen. Following in Barack Obama’s footsteps, Trump launched an attack on Yemen only days after taking office which led to the death of multiple civilians, including women and children.

This is the 8-year-old girl killed in US raid in Yemen, Arabic media reports https://t.co/nPlWh6LqE3
US killed her teen American brother too pic.twitter.com/QP0TsgdIfq

Nawar’s death epitomizes the rapacious and savage nature of the US presence in Yemen and their continued aid to the terrorist nation of Saudi Arabia.

Those responsible for continuing this massacre have blood on their hands and should be held accountable for their crimes. Unfortunately, however, as yesterday’s vote illustrates, most of the people who are tasked with holding others accountable, are the ones responsible for this death on a massive scale.

We now live in a county whose leaders not only support illegal war, but who secretly block debate about perpetuating a mass slaughter and genocide of innocent children. This, ladies and gentlemen, is what the land of the free has become.