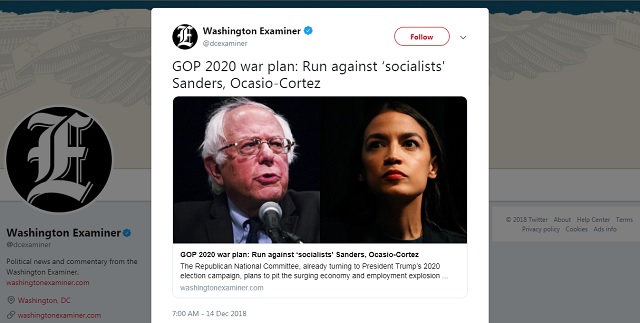 The GOP establishment learned nothing from the midterm elections and is looking to double down on “tax cuts” as their main platform because “suburban women” who shifted left are “apparently unaware of the efforts by the Republicans to boost the economy, cut taxes and add jobs.”

You just can’t make this stuff up!

The Republican National Committee, already turning to President Trump’s 2020 election campaign, plans to pit the surging economy and employment explosion against the bid to raid the Treasury by “socialists” like Sen. Bernie Sanders, I-Vt., and Rep.-elect Alexandria Ocasio-Cortez, D-N.Y.

“They’re saying, ‘We’ll give you the moon and the stars, but we’re not going to tell you how we’ll pay for it.’ I’ll tell you how they are going to pay for it: taxpayer dollars,” she said in laying out an early version of her 2020 plan.

Bernie and Ocasio-Cortez are the two most popular and mildly likable Democrats there are.

Republicans should be running against open borders which Bernie Sanders correctly said before he sold out is a “a Koch Brothers proposal” and they should reach out to Democrats by adopting the protectionist economic policies they abandoned to please their wealthy donors/owners.

McDaniel expressed concern that in the midterm congressional elections many suburban women shifted left, apparently unaware of the efforts by the Republicans to boost the economy, cut taxes and add jobs.

This is just embarrassing.

She promised to build a strong messaging machine to make that case in time for the next election. And that battle plan will also include the threat by liberals to spend more tax dollars, which could threaten the economic boom.

You ran on that in the midterms and it failed. They’re fine with higher taxes because they know only people with “privilege” will be made to pay them.

Duffy sized it up this way: “So you don’t get to spend your hard earned money. You’re going to give it to Alexandria Ocasio-Cortez, that bright rising star in the socialist Democrat party, and let her spend your money for you.” We’re in a battle for the future of Western civilization and these idiots want to talk about tax cuts.

Thank God Trump didn’t listen to these fools and went all in on immigration in the midterms or else the Republicans would have been wiped out.

While they’re screaming about “eradicating systemic racism” and “fighting Drumpf’s white supremacistism” Republicans are going to be talking about the “Laffer Curve.”