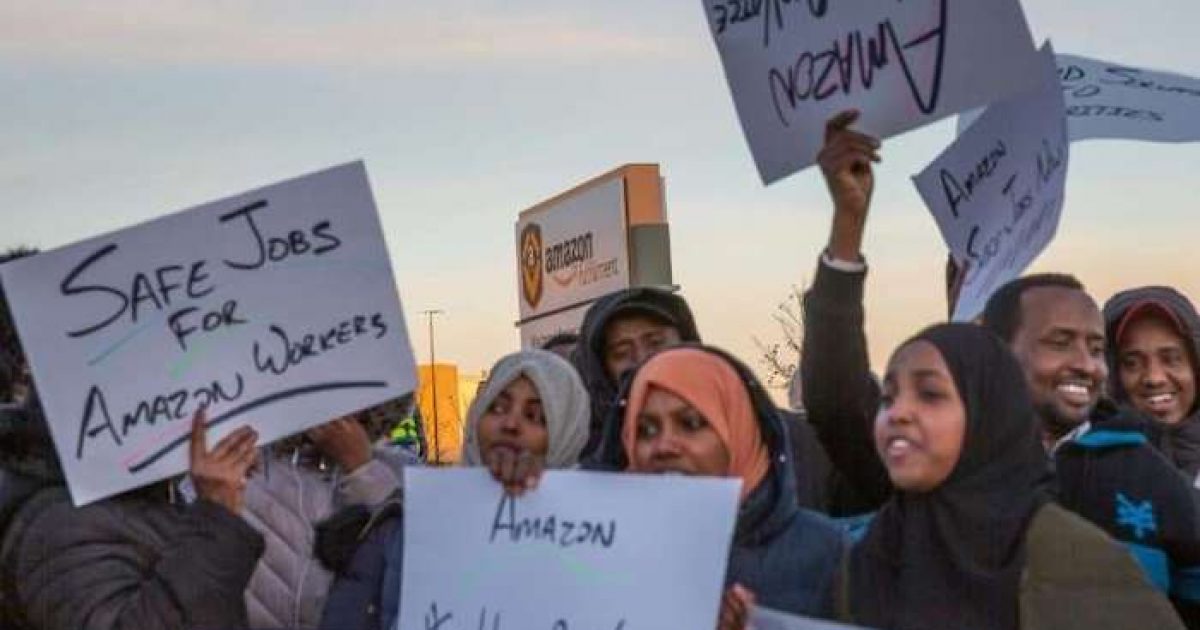 Amazon has banned Jihad Watch from Amazon Smile and Amazon Associates, but its aid to jihadis has not led to its being accorded any breaks by its Muslim workers.

“Amazon says it has offered accommodations such as providing prayer mats for workers, converting a conference room into prayer space during the Muslim holy month of Ramadan and approving shift transfers for fasting workers.”

But it isn’t enough.

“The workers, many of whom are practicing Muslims, say the required productivity rate is too high, the company is unconcerned about worker injuries and that the conditions don’t allow practicing Muslims to pray as they otherwise would.”

The idea is to reinforce the principle, already established in other cases, that Muslims must always have special privileges and accommodations that others do not have. This is true now at Amazon unless non-Muslim workers get time off work equal to the prayer breaks that Muslims are given. Islamic law denies non-Muslims basic rights; only Muslims enjoy full rights in an Islamic society. To establish a similar situation in the U.S. is the ultimate goal here.

A group of Amazon workers in Minnesota who are Somali refugees resettled in the Midwestern US state demanded better working conditions Friday during a protest outside one of the retailer’s warehouses.

Hundreds braved frigid temperatures to demonstrate outside of the Amazon warehouse in the Minneapolis suburb of Shakopee—home to a sizable Somali immigrant population from which Amazon has heavily recruited….

“We don’t have rights in the company,” worker Abdulkadir Ahmad, 30, told AFP.

The workers, many of whom are practicing Muslims, say the required productivity rate is too high, the company is unconcerned about worker injuries and that the conditions don’t allow practicing Muslims to pray as they otherwise would.

“We do not have enough time to pray. There is a lot of pressure. They say your rate is too low,” Ahmad said.

The workers timed their protest during the busy holiday shopping season, hoping to force the online retailer to make changes.

They already have had some success. Amazon says it has offered accommodations such as providing prayer mats for workers, converting a conference room into prayer space during the Muslim holy month of Ramadan and approving shift transfers for fasting workers.

“Additionally, we’ve continued to hire and develop East African employees. We’re a leader in this space and we feel really good about our record here,” Amazon spokeswoman Shevaun Brown told AFP via email….

But workers say Amazon’s efforts so far have fallen short.

“We are appreciative they’ve sat down and talked with us, but we are not seeing real action,” activist Abdi Muse said.

Muse is the executive director of the Awood Center, a union-backed non-profit that organized the protest and helps East African workers in the state….

“When workers leave Amazon, they still live with the back pain, chronic illness, and hurt and harm caused during their employment,” said Ahmed Anshur, the imam at the Al-Ihsan Islamic Center in the nearby state capital of Saint Paul.

Protesters said they want the multibillion-dollar company to give back to the struggling community that has been a major source of its workforce in the Minneapolis area by giving money to a community fund to help struggling immigrant families.

“It’s not a handout or a donation,” said Mohamed Omar, imam at another Minneapolis suburban mosque….

Of course not. Why, who would think such a thing?