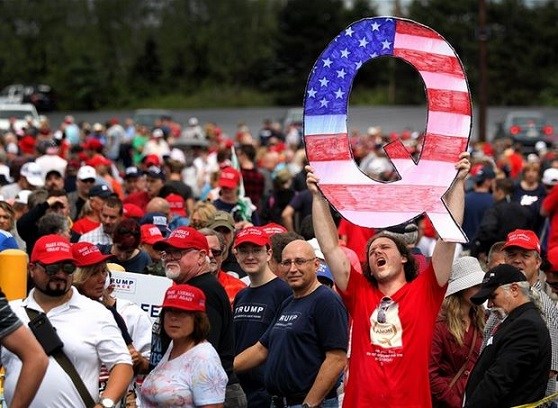 Those who follow the self-described Trump White House insider who calls himself Q, aka QAnon, had been led to believe in one important date after another, none of which materialized.

The most recent date on which something major was supposed to happen was December 5. But the only thing that happened on December 5 was not the anticipated crackdown on the cabal, but former President George H.W. Bush’s funeral.

Then we were told that the “something major” had to be postponed because of the funeral.

Instead of the much-ballyhooed “The Storm”, everything is getting worse:

December 5 was the last straw for me.

Yesterday, this was posted by Enceladus72 on Voat‘s “Great Awakening” subverse. Before it was deleted by the moderator, the post had 4,338 views, 194 upvotes, 33 downvotes, and 416 comments:

I believe you are the real deal i.e. not a larp. However I believe your main purpose has been to contain the unbridled rage of Trumps base. It fits lock and key with ‘trust the plan’. Just wait, and memes away, no other action necessary team Q has this, hold my beer, nothing to see here. You don’t need us just keep us from ruining your plan. About the plan. Is the plan to occupy Syria for the foreseeable future? How about regime change in Iran? Fight fight fight! And lets not forget about Yemen. Cuddling up to those hairy backed camel fuckers in the KSA? All part of the plan? Trump’s base didn’t vote for any of that neocon bullshit. Trust me I don’t trust you. I’ll continue with trust Sessions or the midterms are secure or are you ready for arrests. You get the point. You better hope your little containment OP holds together because while pedophiles satanist might be scary we the Patriots are much more fearsome. We have God himself on our side and a flaming righteous indignation.

Some comments in agreement:

“For my part, I have waited long enough. January 1 is the deadline many of us have been living by.”

“I think Flynn being for all intents accused of treason by the judge broke the proverbial camel’s back. Justice is no longer viewed as an option.”

“i agree. Q better do something visible and meaningful like fucking yesterday (as in right now) because this shit is hitting a fever pitch of frustration. at the very least hes about to lose most of his base.”

“Time for an American Spring. All gun owners and hunters rise up and take it all down.”

“Without doubt us Q followers have now hit a low point. I am discouraged. While I firmly do believe Q is the real deal, I have come to the point of questioning the “genius” behind ALL of the Trust the Plan. I do feel Q and Trump are true Patriots but are they really smart enough to truly save our Country? I don’t think I can bare to even read new Q right now…same old clever cryptic hints that string us along. I have followed Q for over a year. If I see one more [RR] I just might give up entirely. And Declas?? Perhaps Q misjudged our ability to endure the loooong waiting game. I’m at a very low Q point”

“I’m as disgusted as the next person… I do see lots of things happening, just not what I want to see… I think a big problem is that Q said over a year ago the HRC was to be arrested. That didn’t happen, not the best way to start trusting relationship with the “people”. And he’s kept us watching EVERY time something is about to happen boom boom boom. It gets old… If it was going to take a year since the order was signed, then he shouldn’t have dragged us this far because it’s not happening, at least not yet… I will hang in there for 2 more weeks, then time is up and I’ll go back into the shell I was in, it’s safe there…”

“I agree. This entire Q phenomenon seems to be more of a weekly soap opera where we are all compelled to figure out logistic puzzles and take part in never ending data pulls that support Q Group’s assertions/narrative driven by Q and company. This is a war of wits and media dexterity against the MSM.

While I agree that there is absolutely evil and debauchery that has been pushed out into the open and that there is a military driven effort to clean out DC, I think that there is also a very BIG possibility that the Left and the DS [Deep State] are taking advantage of the ‘trust the plan’ BS that Q lays out, as a terrific way to control angry Americans, and ‘pacify’ Veterans, Patriots, and keep Americans less vigilant and more reliant on ‘others’ to right the wrongs, set things right, and avenge the injustices wrought by the Leftists, Globalists, and Marxists, and worse, the treasonous shit bags- on both Left and Right.

I think that if Patriots want to rise up and FIGHT and push back on the Leftist and Globalist Agenda, then lets DO IT. Enough of this constant game being played on us by Q. The QTeam has given more BS than they have TRUTH. I know there has to be misdirection and some lies to maintain Operational Control, but they must truly think American Patriots and Commie Fighters are naive, weak, and lacking in their own fortitude, when they keep pushing daily narrative that is vague, give promises that are never kept, and dates and events are intentionally explained away when they fail to occur. Always disappointment, yet many still linger on QMap like drug addicts, waiting for the next drops…. RIDICULOUS.”

A sample of comments still believing in Q:

“Don’t group me into your Joe Public stuff. I have my own mind and I am sticking with the plan as presented. I have been looking at all of this shit (not Q related) for the last 10 years so what has been accomplished in the last 2 years (with Q) has really given me hope for our country. Just slow down and look at other reasons why things are being done the way they are.”

“At least wait another month before you give up your faith. Think about it.All these executive orders DJT has passed relating to Treason, Military Tribunals, Confiscating wealth of people involved in Human traffic, the war on pedos. The ligit wwwpacer.gov sealed indictments and finally the EO that goes into effect on Jan 1st 2019 that allows these people to be tried in public courts by the public in the form of Military Tribunals. Too many coincidences for all of this to be fake. I am hanging in there and am not willing to give up hope.”

“This is a long game. The deep state’s tentacles are deep and interwoven. The only way to truly take them out is to get every thing in place so that when the trap is sprung there is no escape. The cabal thrives on fear and chaos. They would like nothing more than a violent revolution so they can react and really clamp down, not to mention it would take them closer to their depopulation goals. I don’t think those that are clamoring for instant gratification would like the consequences. If we erupt in a shooting civil war in this day and age, we would be vulnerable to military attack, to social collapse and chaos, danger to our overseas interests… and much more. This isn’t the 19th century.”

“I understand that everyone wants some catalyzing moment. Something shocking like what they saw on 9/11 but for the good. But history doesn’t work that way. Even 9/11 didn’t work that way – it started long before that date and continues in its effects to this day.

So everyone chill out…. And if it’ll make you feel better, make a list of all the big happenings since 2016. I know it seems like nothing is happening when you’re glued to your phone clicking and waiting for perp walks but make that list if you’re serious. You see that a tremendous amount of shit has happened since 2016, but maybe not in the last 5 mins so you can get your fix.

Add up election fraud revelations, me too, ceo resignations, nxivm cult, pedo busts, etc. and you’ll see we are living in extraordinary times.”