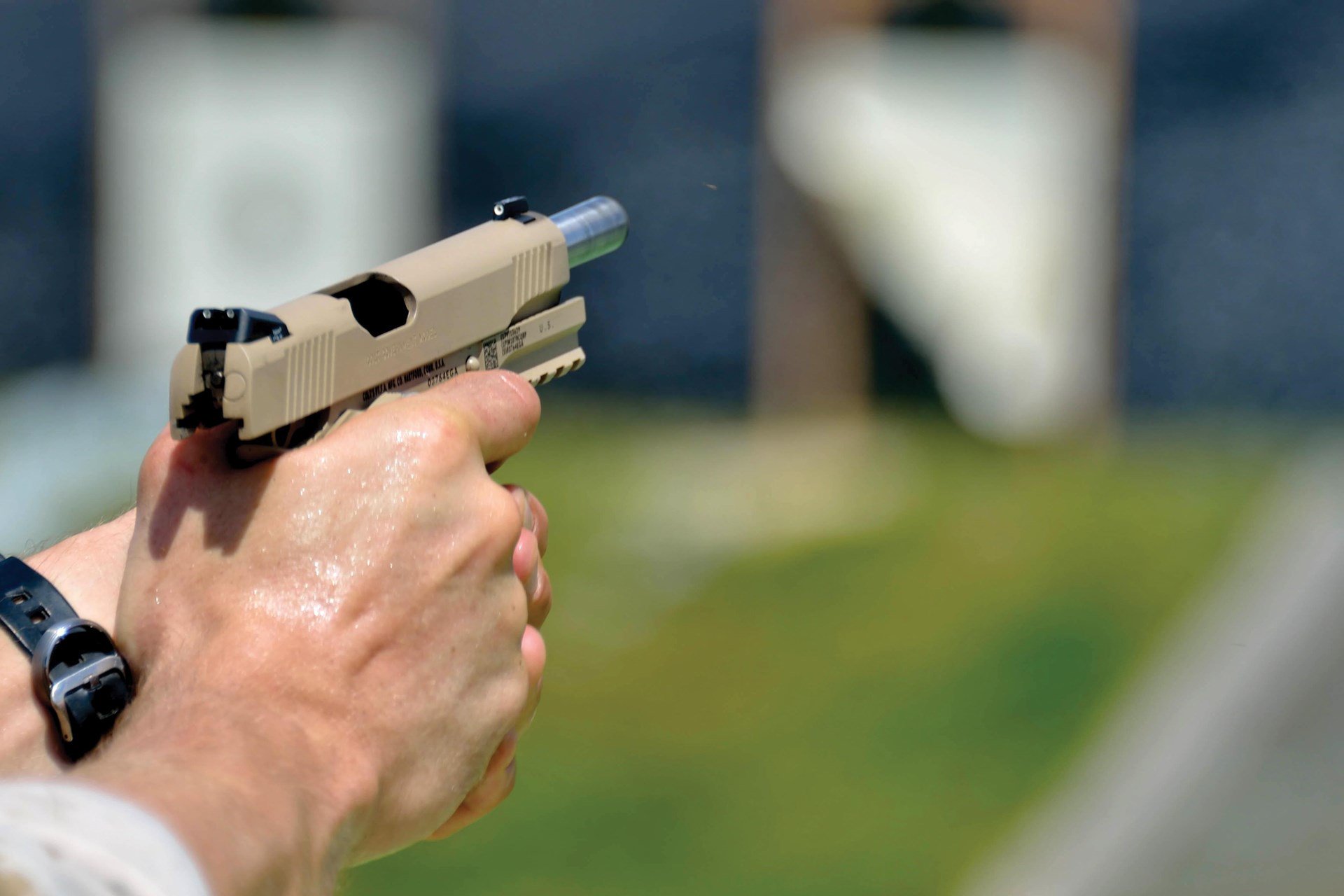 On an April afternoon in 2018, Dr. Matthew Roman and a friend drove together to a Philadelphia gun store, Firing Lane Inc. Seeking to purchase a firearm for home defense, Roman walked up to a clerk and asked to see a Smith and Wesson 638.

After Roman, 33, indicated he’d like to purchase the small six-shooter, the clerk began to ask Roman a few questions, including if he possessed a medical cannabis card, pursuant to question 11e on the ATF’s 4473 form. Roman, who has no criminal history, told the clerk truthfully that he has a medical prescription for marijuana. Sorry, the clerk told him, no gun.

Roman’s application was denied due to his medical use of cannabis, which is legal in the Commonwealth of Pennsylvania. In November, he filed a lawsuitthat names acting attorney general Michael Whitaker and the directors of the FBI and Bureau of Alcohol, Tobacco, Firearms, and Explosives (ATF).

The case could have far-reaching Second Amendment implications and has the potential to affect millions of gun owners in the U.S. (Medical marijuana use is legal in 32 states.)

A Legitimate Use of Medical Marijuana

In addition to being licensed to prescribe marijuana for medical use in Pennsylvania, Roman also has his own license and uses the plant to treat his post-traumatic stress disorder, one of the most commonly accepted uses.

Roman has no criminal history—of violence or any other offenses. But because of the 1968 Gun Control Act, and the federal government’s continued designation of cannabis as a Schedule I drug, his purchase was denied—even though medical marijuana is legal in most U.S. states.

The 1968 law prohibits anyone who uses an “unlawful” substance from purchasing a firearm. Roman is asserting this violates the Second Amendment, as well as his Fifth Amendment right against self-incrimination; federal firearm transaction forms require medical marijuana users to report that they use the drug unlawfully even when it is legal in their state.

Though the 1968 law has been on the books for decades, in 2011, the ATF issued a clarifying statement to federal firearms licensees asserting medical marijuana users were not entitled to exercise their right to bear arms because of the federal government’s prohibition. Citing the government’s inclusion of the popular plant in the Controlled Substances Act, the agency said: “[T]here are no exceptions in federal law for marijuana purportedly used for medicinal purposes, even if such use is sanctioned by state law.”

According to Roman’s complaint:

Defendants have intentionally denied those who have registered to use medical cannabis pursuant to state law the right to lawfully purchase firearms without providing any due process prior to depriving this class of individuals of their constitutional right.

The complaint argues that “this strict, rigid, blanket prohibition violates the fundamental constitutional rights of tens of thousands of non-violent, law-abiding citizens, and thus violates the Second and Fifth Amendments of the Constitution.”

We’ve Been Here Before

This is not the first time the federal government’s policy on cannabis use and gun rights has faced legal opposition. In 2011, a Nevada woman was blocked from purchasing a firearm because she had a medical marijuana license. She filed a suit, and in 2016, the 9th US Circuit Court of Appeals reaffirmed the ATF’s policy explicitly restricting individuals who lawfully use cannabis in their states from owning firearms. The decision applied to nine western states within the court’s jurisdiction, including California, Oregon, and Washington.

A notable element of court’s ruling was the assertion that illicit drug use is linked to violence (border states with legal access to cannabis have actually seen a decrease in violent crime as Mexican cartels lose power). The judges alluded to government claims in similar cases, citing “a significant link between drug use, including marijuana use, and violence.”

They also cited Congress’s “reasonable conclusion” that, among other drugs, cannabis use “raises the risk of irrational or unpredictable behavior with which gun use should not be associated.”

While government officials in some states claim marijuana legalization has fueled violence, the data is inconclusive at best. These dubious claims about the role of cannabis use in driving violent crime unsurprisingly illustrate the government’s fixation with obeying authority for authority’s sake.

The federal government imposes no gun restrictions on alcohol use, which has an established link to violence, nor does it restrict firearm ownership based on individuals’ consumption of potent pharmaceutical drugs. (This is not to suggest the government should impose such prohibitions on those substances in the name of “public safety” but rather to highlight its lack of consistency and simultaneous preoccupation with following “the law”—regardless of how little practical sense it makes.)

You have alcoholics who are not prohibited from owning firearms. Ambien has side effects that are arguably much worse than those of medical marijuana, and yet a person who’s being prescribed Ambien for this same condition has the absolute constitutional right to own a firearm for self-defense in his home.

Weston accused the feds of “picking on medical marijuana … when it’s much less harmful than any of the other medicines you can use to treat this condition.”

Weston is optimistic about the case and believes the outcome will be different than the 9th Circuit Court decision. But first, the case must survive a motion to dismiss, which Weston told FEE, he expects the government to file in the coming weeks. If the motion is denied, all bets are off.

Weston suggested there is a wide variety of potential victories that could range from the restoration of Roman’s individual right to purchase a revolver to a complete overhaul of the federal government’s policy on medical marijuana and gun ownership.

“Under the medical marijuana act in Pennsylvania, it’s my view that the prohibition doesn’t apply at all,” he said.

Rep. Thomas Massie, a Republican congressman from Kentucky, appears to agree with this sentiment. Though he did not comment specifically on this case, he has drafted legislation to remove question 11e, which barred Roman from purchasing his chosen revolver, from the 4473 form. Massie plans to introduce the bill during the next session of Congress and hopes to gain bipartisan support.

I’ve drafted, but haven’t yet introduced, a bill to remove the marijuana question from ATF form 4473 — the question that requires anyone who uses marijuana (crime) to lie (crime) in order to purchase a gun (crime) from a gun dealer. Any Democrats who would support such a bill? https://t.co/5cAmsTPLoX

But the bill, he says, would do more than simply do away with the question.

“[The legislation] will take the question off the form, but my bill goes deeper than that,” he recently told Marijuana Moment in a phone interview.

“It makes it legal for marijuana users to also be gun owners, is what my bill does.”

Regardless of the pending legislation, Roman’s current case has received tepid media attention but failed to draw significant coverage. A possible reason for this is that the case does not fit neatly into either side of America’s dominant ideologies.

The modern political left and right both seek to restrict some individual rights while endorsing others, and Roman’s complaint asserts rights both sides deny. While the left may support medical marijuana and cannabis legalization in general, they fail to support gun rights in any substantial way. While the right may support gun rights, they continue to support cannabis prohibition—or, at least, punitive measures against cannabis users—so long as the plant remains illegal at the federal level.

The policy Roman’s case is seeking to overturn ultimately represents the intersection of a growing threat in the United States: Americans’ tendency to endorse stamping out some rights while championing others, an intolerant and often arbitrary approach that puts all rights—and liberty itself—at risk.

Carey Wedler is a video blogger and Senior Editor for Anti-Media.