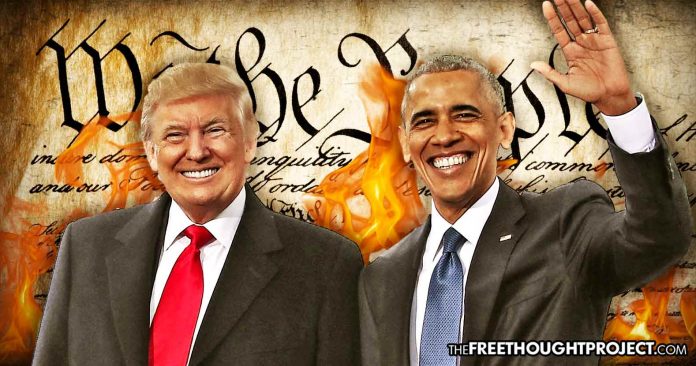 (TAC) — Just as some gun rights groups flip-flop on protecting the right to keep and bear arms from federal encroachment, so has Republican President Donald Trump. Not only has he ramped up federal gun control enforcement, but he has unilaterally implemented new federal gun control in the form of a bump stock ban.

As we’ve pointed before, the effectiveness of this policy is moot: the feds have no constitutional authority to restrict firearms.

It’s important to keep in mind that this isn’t merely something occurring under Trump’s watch but out of his control. The president actively pursued an unconstitutional firearm restriction through an unconstitutional method via agency rulemaking. If the constitution did not delegate authority to the Congress or the president to enact such a rule – and the Second Amendment makes that adamantly clear – then obviously a bureaucracy has no such power, either.

Before Trump supporters turn a blind eye to this or rationalize his actions, they should honestly ask themselves how they would respond if Obama tried to do the same thing.

Oh, wait. He essentially did.

In 2015, President Obama directed the ATF to pursue a possible ban on the M855 cartridge. To do so, they released a proposed agency rule which redefined M855 “green tip” ammunition as “armor piercing” to qualify it for federal prohibition under the 1968 Gun Control Act (GCA).

Ostensibly, the rule was meant to curb police deaths, but many gun rights advocates rightly pointed out that it was likely a thinly-veiled effort to undermine civilian access to AR-15s. The National Rifle Association reports that the “ban was opposed by law enforcement experts, 238 members of the U.S. House of Representatives, 53 U.S. senators, 80,000 Americans who submitted comments to ATF, and the NRA.”

When Obama was doing it, unilaterally changing agency rules to ban a certain kind of ammunition was seen as “back-door gun control.” It was an egregious executive overreach. It was a foot in the door that would lead to more and more federal gun control.

People who said this were right.

In the end, NRA-backed Trump succeeded in a way Obama could not: adding another major violation of our right to keep and bear arms onto the books that is unlikely to ever be repealed.

If you ever needed an example of why we can’t trust anyone in D.C. to protect our gun rights, this is it.

The only way forward is for states to pass anti-commandeering laws that withhold critical state resources and personnel from the feds.