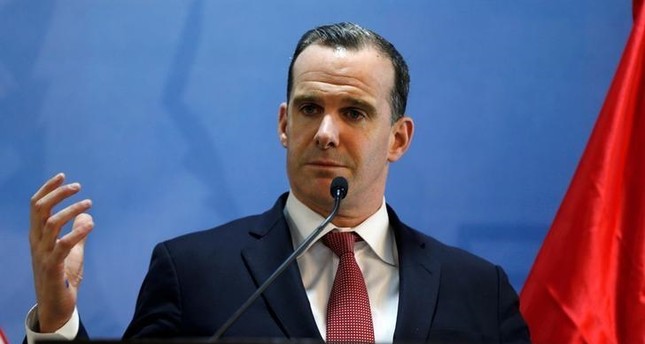 After President Donald J. Trump lived up to his non-interventionist promise by removing troops from Syria, Defense Secretary James Mattis immediately announced his “retirement.” Mattis isn’t the only globalist warmonger leaving the administration over Trump’s peace push, as Brett McGurk resigned as the U.S. envoy to the global coalition fighting the Islamic State Saturday.

In the days before Trump made the announcement of peace in Syria, it was obvious McGurk was not on the same page as the President.

“Nobody is saying that they are going to disappear. Nobody is that naive,” McGurk told reporters on Dec. 11. “So we want to stay on the ground and make sure that stability can be maintained in these areas.”

McGurk issued a resignation letter today indicating his displeasure with Trump’s frequent claims that ISIS is all but finished in the region, and it is no longer necessary for the US to occupy Syria.

I am in the White House, working hard. News reports concerning the Shutdown and Syria are mostly FAKE. We are negotiating with the Democrats on desperately needed Border Security (Gangs, Drugs, Human Trafficking & more) but it could be a long stay. On Syria, we were originally…

….going to be there for three months, and that was seven years ago – we never left. When I became President, ISIS was going wild. Now ISIS is largely defeated and other local countries, including Turkey, should be able to easily take care of whatever remains. We’re coming home!

McGurk was a certified member of the political establishment, having served as a Supreme Court law clerk to the late Chief Justice William Rehnquist. He then became a bonafide swamp rat, joining the George W. Bush administration serving as top U.S. negotiator for security agreements in Iraq on the National Security Council staff.

While ISIS may not be totally obliterated, they are no longer being subsidized by the CIA because Trump ended that Obama-era policy and currently 98 percent decimated from their previously high totals. Syrian President Bashar al-Assad and Russian President Vladimir Putin, the heroic leaders arguably most responsible for repelling ISIS in the region, will still be around to do the final clean-up.

Like Trump said, the days of the United States being the world’s policemen are over regardless of any kvetching from entrenched bureaucrats, the mainstream media, or anyone else.

Does the USA want to be the Policeman of the Middle East, getting NOTHING but spending precious lives and trillions of dollars protecting others who, in almost all cases, do not appreciate what we are doing? Do we want to be there forever? Time for others to finally fight…..

….Russia, Iran, Syria & many others are not happy about the U.S. leaving, despite what the Fake News says, because now they will have to fight ISIS and others, who they hate, without us. I am building by far the most powerful military in the world. ISIS hits us they are doomed!

All of the globalist neocon warmongers embedded in Trump’s administration are welcomed to join McGurk and Mattis on the unemployment line if they cannot adapt to Trump’s ‘America First’ peace agenda!