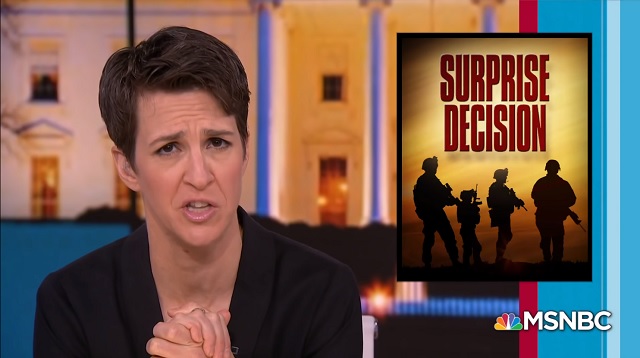 Glenn Greenwald noted Friday on Twitter that MSNBC host Rachel Maddow, who is currently suggesting that Trump pulling out of Syria and Afghanistan is part of a Russkie conspiracy, “wrote an entire book in 2012 denouncing illegal US Endless War without congressional approval – exactly what Syria is.”

The most bizarre aspect of Rachel @Maddow's deep anger over troop withdrawal from Syria is that she wrote an entire book in 2012 denouncing illegal US Endless War without congressional approval – exactly what Syria is. I interviewed her about it here: https://t.co/Zg7K1a3bUy https://t.co/js74z4iGUN

Greenwald was responding to Michael Tracey, who expressed outrage earlier about Maddow shilling for war:

Yes, she connected Putin to Afghanistan, not Syria (although has intimated Syria is part of a corrupt plot as well). Her operating premise is that every Trump geopolitical action should be understood as dictated by his desire to thwart Mueller, or something. Common Dem pathology.

Earlier this year Maddow also attacked President Trump for ending war games with North Korea, which she also suggested was a Russkie conspiracy.

In the bizarro world propagandists like Maddow have created, everything which happens in the universe is the result of a Russkie conspiracy.