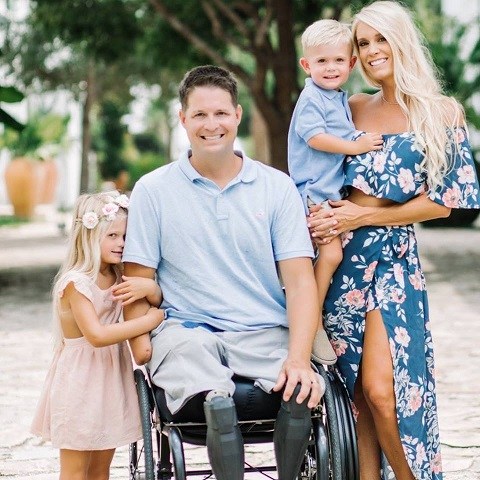 On December 16, 2018, Kolfage created a GoFundMe to raise funds for the US-Mexico border wall. In just a week, he’s raised a phenomenal $16½ million toward the stated goal of $1 billion.

Kolfage and his family are getting vicious hate mail and death threats from leftists. The leaders of the jackals are ABC latenight talkshow host Jimmy Kimmel, has-been actress Alyssa Milano, and the Daily Beast.

Attacks on my family-

Just want to let you guys know everything is ok with us. After Jimmy Kimmel and Alyssa Milano came after me personally it triggered an outpouring of attacks. People have been calling for the death of my wife and children; it will not be tolerated. Please do your best to report anything you see like this to the proper authorities.

WE WILL NOT BE DETERRED! KEEP RALLYING!

Deranged leftists have been sending triple-amputee veteran Brian Kolfage mountains of abuse after he was trashed by the Daily Beast, Jimmy Kimmel, Alyssa Milano and other high-profile liberals.

The hate mail provided to the Gateway Pundit contains appalling statements such as people asking if his brain was “amputated too,”calling him a “handicapped bitch,” telling him to commit suicide, wishing harm upon his children and mocking him for having lost his limbs while fighting for this nation….

On Thursday, Kimmel used his show to trash the nearly 260,000 people who have donated nearly $16 million to the GoFundMe in less than a week, calling them “dopey people” and saying that they are “dipping into their meth money.”

Dozens of examples of the vitriol and threats were provided to the Gateway Pundit, some of which we are now publishing — unedited.

Below is a sample of the hate mail sent to Kolfage (source: Gateway Pundit):