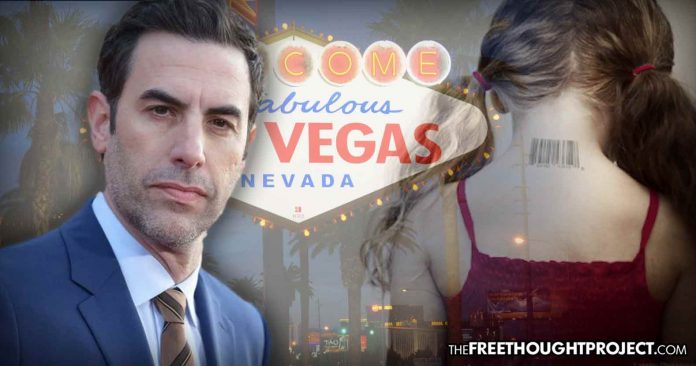 During the filming of Sacha Baron Cohen’s latest show, Who is America?, the actor got Dick Cheney to autograph a waterboarding kit, uncomfortably tested Roy Moore with a ‘pedophile detector’, and got republicans to endorse the arming of kindergartners. However, while filming in Las Vegas, as Cohen played an Italian playboy called Gio Monaldo, his uncomfortable antics seemingly revealed an elite pedophile ring.

While playing Monaldo, Cohen asked the hotel concierge to procure him a small child for sex — to which the concierge quickly abides.

“We wanted to investigate how does someone like Harvey Weinstein gets away with doing what…get away with criminality, essentially. And the network that surrounds him. We decided that Gio would interview a concierge in Las Vegas,” said Cohen in an interview with Deadline.

As Cohen spoke to the concierge at the hotel, he confessed to sex with children and the concierge did not waiver. Instead, he tells Cohen how to cover it up and notes how they know people who can “silence” the boy.

“During the interview, I revealed that basically Gio has molested an eight-year-old boy,” he continued. “Now, mind you, this is extreme comedy and we thought that the guy would leave the room. Instead, this concierge stays in the room and I go, listen, you’ve got to help me get rid of the problem. This guy starts advising Gio how to get rid of this issue. We even at one point talk about murdering the boy, and the concierge is just saying, ‘well, listen, I’m really sorry. In this country, we can’t just drown the boy. This is America we don’t do that,’” said Cohen.

Instead, according to the concierge, they had lawyers who could make the boy never talk again.

After he gets the concierge to agree to help cover up the molestation of an innocent young boy, Cohen then asks him if he can get him a “date” with another child.

“And then at the end of the interview I say, listen, I want to go out and celebrate now. Can you get me a date for tonight? He says, ‘what do you mean, a date?’,” Cohen explained to Deadline.

“I go, you know, like a young man. He says, ‘well, what kind of age?’ I say, lower than Bar Mitzvah but older than eight. And he says, ‘yeah, I can put you in touch with somebody who can get you some boys like that,’” Cohen said.

And just like that a pedophile ring was accidentally uncovered in Las Vegas.

While this shock comedian normally takes the insane footage from his show and throws it out on the airwaves, this time, it was so damning, he went straight to the FBI.

Cohen said he turned it over to the FBI “because we thought, perhaps there’s a pedophile ring in Las Vegas that’s operating for these very wealthy men,” he told Deadline. “And this concierge had said that he’d worked for politicians and various billionaires.”

Despite allegedly having video that showed a hotel concierge claim he could not only silence child victims of sex abuse, but procure child prostitutes and has done so for “billionaires and politicians,” according to Cohen, “the FBI decided not to pursue it.”

With such horrific allegations, allegedly captured on video by Cohen, one would think that the FBI would be all over this case. However, it appears that the opposite has happened.

As TFTP has reported time and again, these pedophile rings almost always get traced back to elite politicians and billionaires like Jeffrey Epstein. But, when it comes time for Epstein and other convicted child predators like former congressman Anthony Weiner and former Speaker of the House Dennis Hastertto be held accountable for their crimes, they are given sweetheart deals by the system and do less time than people caught with marijuana.