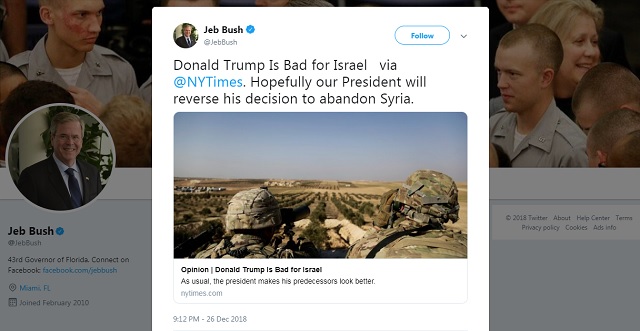 Failed presidential candidate Jeb Bush said Wednesday on Twitter that he hopes President Trump will “reverse his decision to abandon Syria” because it’s “bad for Israel.”

Donald Trump Is Bad for Israel via @NYTimes. Hopefully our President will reverse his decision to abandon Syria. https://t.co/nrZbhpV5Zj

He linked to an article from the New York Times by neocon Bret Stephens which said “that the ultimate long-term threat to Israel is the resurgence of isolationism in the U.S.”

“What Israel most needs from the U.S. today is what it needed at its birth in 1948: an America committed to defending the liberal-international order against totalitarian enemies, as opposed to one that conducts a purely transactional foreign policy based on the needs of the moment or the whims of a president.”

Contrary to the invidious myth that neoconservatives always put Israel first, the reasons for staying in Syria have everything to do with core U.S. interests. Among them: Keeping ISIS beaten, keeping faith with the Kurds, maintaining leverage in Syria and preventing Russia and Iran from consolidating their grip on the Levant.

President Trump said Wednesday that we give Israel billions of dollars every year and they can defend themselves.

Trump: We give Israel billions, it can defend itself in Syria https://t.co/o1iqVDKHsi

From the Times of Israel:

Speaking with reporters, Trump was asked about criticism that the move could put Israel in jeopardy by allowing Iran to expand its foothold in Syria.

“Well, I don’t see it. I spoke with Bibi,” he said, referring to Prime Minister Benjamin Netanyahu. “I told Bibi. And, you know, we give Israel $4.5 billion a year. And they’re doing very well defending themselves, if you take a look.”

“So that’s the way it is,” Trump said, according to a White House transcript.

Stephens’ column made no mention of the billions in foreign aid America gives Israel every year.