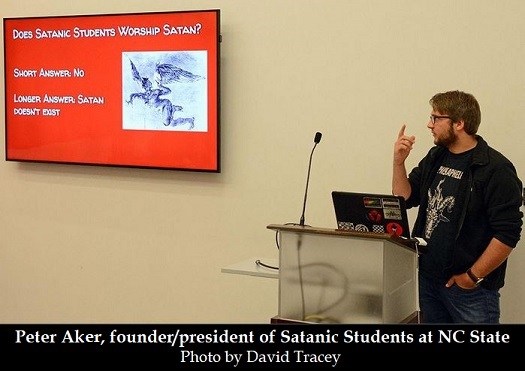 The mission of Satanic Students at NC State University is to 1) encourage benevolence and empathy among all people, 2) reject tyrannical authority, 3) advocate scientific examination of the universe and our place in it, 4) promote morality and justice based on rational, humanistic values, and 5) be directed by the human conscience to undertake noble pursuits guided by the individual will.

According to Technician, the official student newspaper of NC State University, a recent slide presentation at a Satanic Students meeting denied that the club worships Satan because “Satan doesn’t exist”.

That doesn’t make any sense. If the Satanic Students at NC State believe Satan doesn’t exist, then why call the club “Satanic”?

The satanic club’s founder and president is Peter Aker, a third-year studying chemical engineering. He said the purpose of the club is not to be inflammatory or to promote any particular system of beliefs, but that “Satanism is more of a philosophy and ideology, and not so much a religion. We don’t believe in a literal Satan. Instead, we use its philosophy and the symbology behind it to form our opinions on the way the world should go.”

Aker claims his club has “the same amount of validity” as other religious groups on campus, but has a better message — “It’s more modern. It’s less restrictive and puritan. We don’t preach that you’re going to go to Hell if you do bad things … What matters is what you do here, while you’re alive.”

In other words, it’s the same old Aleister Crowleyism — Do As Thou Will.

Aker admitted that his club’s five-part mission statement is based loosely off of the seven tenets of The Satanic Temple, which Aker lauds for advocating topics such as women’s reproductive rights that was promoted by several of the temple’s chapters as “Menstruatin’ With Satan,” in which feminine health care products were collected and redistributed to communities in need.

Alec Nabinger, a fourth-year student studying sustainable materials and technology, described some of Satanic Students’ principles to which he was drawn when he joined the club: “It’s more of just, the Satanic ideals of bodily autonomy, knowledge through science, accountability.”

Aker said the club has 8 members.