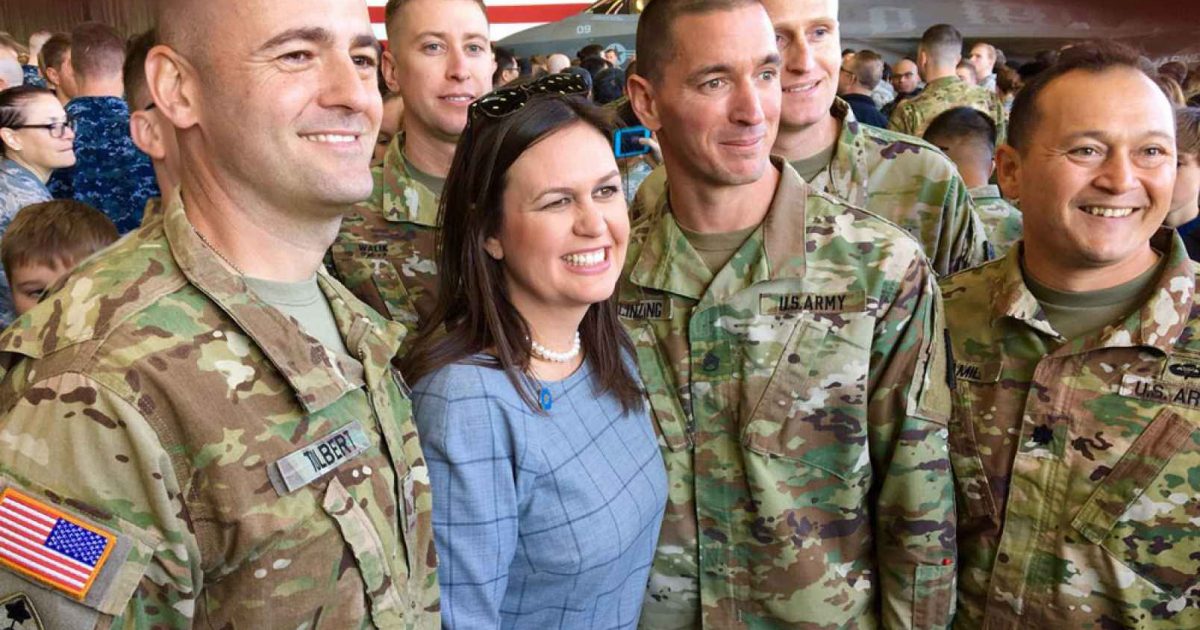 The struggle for the future of this country is being fought in the hearts and minds of its citizens. The media is the enemy and Sarah Huckabee Sanders is the warrior who takes them on day after day.

CNN alone has 4,000 employees. The New York Times has nearly as many. And when she singlehandedly faces off against 49 people in the James S. Brady Press Briefing Room and the less than 30 people on her staff take on a mainstream media machine of tens of thousands, it’s a true underdog story.

For a year and a half, Sanders has been reporting for duty as the White House Press Secretary. She’s been shouted at, called names, had her appearance demeaned, and was kicked out of a restaurant.  Mainstream media White House correspondents, invariably male, try to talk over her and shout her down. But she’s been so effective that there have been calls by the media to boycott her press briefings.

With Sarah’s success has come a high price. Leftist harassment of Sanders has become so severe that she has become the first press secretary to require secret service protection, including at her home.

“The media has attacked me personally, on a number of occasions, including your own network,” Sanders said, responding to CNN’s Jim Acosta, who would later get in trouble for manhandling a female White House intern. “Said I should be harassed as a life sentence, that I should be choked.”

It was MSNBC’s Nicole Wallace who made the choking remark, saying, live on the air, to an NBC White House correspondent, “How do you resist the temptation to run up and wring her neck?”

“No one is telling them to be violent protesters, but we’re not going to go let these people go through life unscathed,” the Washington Post’s Jennifer Rubin had declared on MSNBC. “Sarah Huckabee has no right to live a life of no fuss, no muss, after lying to the press, after inciting against the press. These people should be made uncomfortable.”

Neither MSNBC nor the Washington Post imposed any consequences for this violent rhetoric because murderous fantasies aimed at Trump and his people have been normalized by the mainstream media.

“When I was hosted by the Correspondents’ Association, of which almost all of you are members, you brought a comedian out to attack my appearance, and called me a traitor to my own gender,” Sarah noted.

But Sanders pushed back and won.

The White House Correspondents’ Association has revamped its lineup moving away from the Michelle Wolf fiasco to a more civil tone. And Sanders’ determination and resilience in the face of that ugly episode of media harassment even won grudging admiration from members of the media.

“Watching a wife and mother be humiliated on national television for her looks is deplorable,” MSNBC’s Mika Brezinski tweeted.

“That @PressSec sat and absorbed intense criticism of her physical appearance, her job performance, and so forth, instead of walking out, on national television, was impressive,” Maggie Haberman of the New York Times tweeted.

But that’s always been her strength.

No matter what the media throws at her, from insults to death threats, Sarah Huckabee Sanders stays focused and remains on message. The interruptions, tantrums and yelling by the media mob have yet to rattle her. She may have the Secret Service at home protecting her and her family, as she pointed out, “a Hollywood actor publicly encouraged people to kidnap my children”, but she’s never let it stop her.

Like other members of the Trump administration, there have been efforts at legal harassment. These attacks also frequently went into the realm of the unbelievably absurd, such as the time that Walter Shaub, Obama’s head of the Office of Government Ethics, suggested that Sanders had violated the Hatch Act when she tweeted about an Amazon Echo ordering a toy because her son shouted Batman into it.

(Meanwhile, Shaub had repeatedly abused the OGE Twitter account to attack Trump, before going to work for a Soros funded organization.)

Then a complaint was filed with the Office of Special Counsel over a photo that Sanders took with Kanye West because no angle of attack is too petty and no effort at intimidating Trump’s people too ugly.

But throughout all the harassment, verbal, physical and legal, Sanders has kept right on going.

The New Yorker called the 5’6 Arkansas native, “Trump’s battering ram.” That’s how the flacks of the media, the privileged potentates of the Washington D.C. press corps, see Sarah because she won’t bow to the gargantuan echo chamber of the mainstream media. But Sarah Huckabee Sanders isn’t a battering ram. She’s a fortress. She takes a stand and makes it clear that she won’t be moved.

And she pushes back, not by yelling at the media, but by firmly insisting on correcting its members, on distinguishing between right and wrong, and on demanding standards from her media opponents.

Sometimes Sarah Huckabee Sanders does it by just insisting on plain old-fashioned goodness.

Last Thanksgiving, Sanders insisted that reporters say what they were grateful for before asking her a question. The New Yorker fumed that Thanksgiving was a “degrading ritual”. “I’m thankful that Trump has failed,” the Washington Post shot back.

But the Thanksgiving moment defined what made Sanders so different than other press secretaries.

In Washington D.C. politics, it’s all too easy to get caught up in the spin cycle, to lose sight of basic truths, and to be always reacting to the news cycle with no sense of higher truth or deeper principles. Press secretaries have to build backdoor relationships with the media, undermining their employers by trading secrets in order to plant stories, while thinking about possible media employment down the road. In that environment, it’s easy to forget who you are, what you believe and what you stand for.

Sarah Huckabee Sanders has never forgotten that. In a hateful environment of utter indecency, she stands for the simple decency of defying the tide of hatred that washes ashore at every gathering in the James S. Brady Press Briefing Room. And she does it with admirable dignity and fortitude.

Media portrayals often depict Sanders as a bully, humiliating and embarrassing the media. The opposite is true. Her stolid dignity and unmovable insistence on telling the truth embarrassed the media. Every time Sanders takes on the press corps, they come away looking like deranged, egotistical activists throwing a tantrum. The media, which is built on spinning reality, has smeared her, but it’s never been able to change her. That’s why it’s pondering the idea of just giving up and running away from a 5’6 woman.

And that’s why Sarah Huckabee Sanders is FrontPage Magazine’s Warrior Person of the Year.

The Media Loves to Write Anything But the Truth
January 27th, 2021 The Real Side With Joe Messina