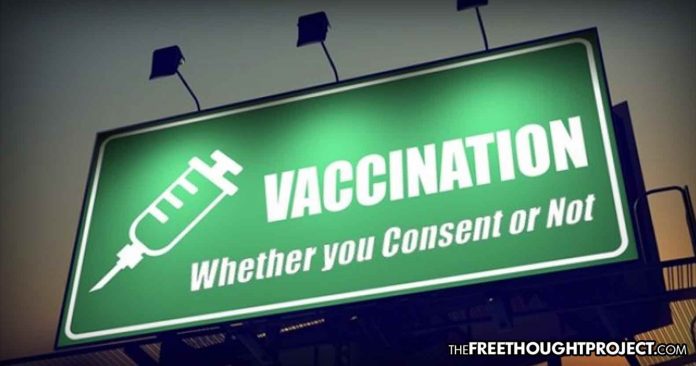 New Haven, CT — Parents who fail to get their 2 to 4-year-old children vaccinated for influenza in Connecticut are in for a rude awakening when children return to school after Christmas break. If they cannot prove their child received the flu vaccine, they will not be allowed to return to school.

The new state law is simple: comply or your child cannot go to school.

It is no question that the subject of vaccines is profoundly controversial. On both sides of the argument exists truth and lies that can hinder the ability of some to make rational decisions.

While we have everyone from attorneys to biologists, to political scientists who write for the Free Thought Project, none of us are doctors, so we do not make recommendations about what you and your family should do in regards to vaccination. That being said, however, government mandating vaccinations is a highly unethical practice as it removes the right to informed consent.

Lawmakers claim that the new law is necessary because every year in the US roughly 20,000 children under 5 are hospitalized because of the flu. But historically, the data shows that these numbers are largely skewed.

The CDC has been telling the public for nearly a decade that there are more than 200,000 estimated hospitalizations and 36,000 estimated deaths from influenza in the U.S. every year.

But these estimates count a lot of people hospitalized – not just with influenza but also with pneumonia, respiratory and circulatory illnesses – which they counted as probably associated with influenza.

What’s more is the fact that the flu shot is a crap shoot every year. It was no secret that last year’s vaccine was all but entirely ineffective.

Also, despite reassurance from government officials, the flu vaccine has been documented to cause harm.

As TFTP reported in December, Shane Morgan, like millions of other Americans was vaccinated against the flu virus in November. However, within 36 hours of receiving the shot, he began experiencing symptoms of the flu.

“About 36 hours after he got the flu shot he started to get sick,” said Mr. Morgan’s wife, Monique.

After staying in bed for a week at his house, Morgan did not improve. In fact, things got far worse and he had to be admitted to the emergency room ICU.

Morgan spent the next 3 weeks in the ICU, blinded and paralyzed. He is now home with his family but he is far from back to normal as he’s still partially blind and in a wheelchair.

How many children will experience similar reactions as a result of Connecticut’s new law?

Luckily, for parents of students who wish not to inject their child with the flu vaccine, Connecticut still allows a religious exemption. However, as TFTP has reported in the past, this exemption is constantly under attack by government officials.

On June 30, 2015, California governor Jerry Brown signed SB 277 effectively stripping the personal and religious belief exemptions for parents who choose not to vaccinate their children. The law went into effect in 2016 and required that all children entering daycare, kindergarten, or 7th grade to be vaccinated unless they have a medical exemption.

As TFTP reported last year, this law came to a head when police officers detained a mother to make sure she had vaccinated her son. Porsha Rasheed was simply walking her six-year-old son to the bus stop last year when she was approached by a Claremont police officer and a representative of the school district and harassed in an attempt to find out the vaccination status of her child.

In true Stasi-esque fashion, the officer and the school official approached Rasheed and demanded she show them her papers.

“I just want to know do you have the vaccine records or not?” said Philipe Levasen.

Rasheed then demands to know who is asking her these questions and the man responds that he is Philipe Levasen.

“What is your position that you need to know this?” asks Rasheed.

“Ma’am, I’m the one who needs to know if you have had the vaccines with your son,” Levasen says.

The Free Thought Project checked with the Claremont Unified School District and there is no position with the title “one who needs to know if you have had the vaccines.”

Luckily, Rasheed flexed her rights and the state agents left. But these cases could become the norm as more and more states mandate vaccinations.

Whether or not you agree with a mother’s decision to not vaccinate their child is irrelevant. While there will likely be many folks cheering on the state in these situations, how you feel personally about vaccines should never lead to a loss of freedom. No person should be forced by government regulation or societal pressure to receive any medication or treatment, including vaccines, against his or her will.