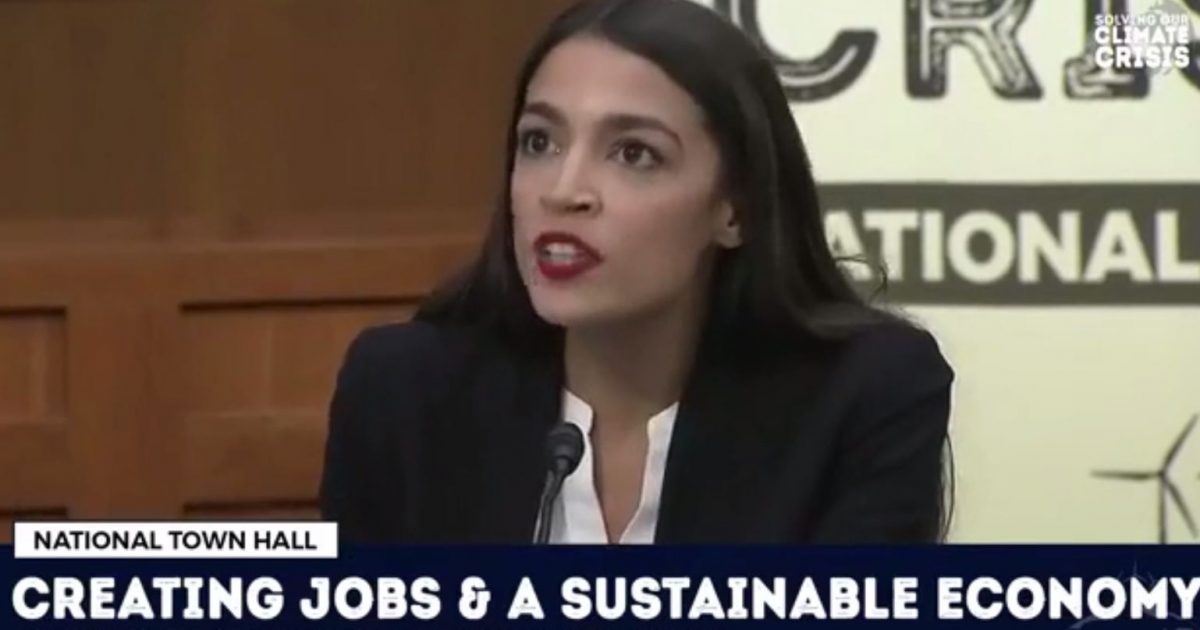 It seems that newly-elected Democrat Socialist Alexandria Ocasio-Cortez isn’t waiting to actually take office before she plots to destroy America.  Earlier this week, an op-ed at Fox News details how she intends to do that.  For some time, the New York radical has been hawking something called the “Green New Deal.”  And she’s gotten some 40 House Democrats and several Democrat senators to join in her scheme.

Her proposal, Justin Haskins said, “would eliminate much of the United States’ fossil-fuel consumption.”  But it goes much farther than that.

Haskins tells us the specifics haven’t been hashed out yet, but “what we know so far about her plan is that it would have catastrophic economic consequences, dramatically increase America’s already skyrocketing debt, and transform the United States into a European-style socialist nation.”

And, he further says, ‘these are not exaggerations.”

In a draft resolution to create a House select committee that would be responsible for writing the Green New Deal legislation, Ocasio-Cortez outlines the primary goals of her plan. Among them, Ocasio-Cortez proposes eliminating all fossil-fuel-powered electricity, closing every coal and natural gas power plant in the country, thus destroying the hundreds of thousands of jobs related to these businesses. Even more stunning, all this would occur by 2030, just 10 years after Ocasio-Cortez expects the legislation to be completed.

In its place, nearly all energy would be produced by renewable sources of power, especially wind and solar. This goal would create massive amounts of economic harm. Although economists have yet to provide an analysis of Ocasio-Cortez’s proposal to eliminate all fossil fuels, other studies have found less-extreme policies would be absolutely devastating. A study published in October 2018 by Capital Alpha Partners on behalf of the Institute for Energy Research found a national tax on carbon dioxide would cost the U.S. economy $4.21 trillion to $5.98 trillion, depending on the tax level chosen, in just the first 10 years of the tax scheme. By 2040, as much as $12.32 trillion would be lost. Nearly one-quarter of the country’s GDP, relative to what it would otherwise be, could be lost as a result of a nationwide carbon-dioxide tax. And this far left-wing plan is nowhere near as radical as Ocasio-Cortez’s Green New Deal.

It gets even better:

Not only would Ocasio-Cortez’s plan destroy trillions of dollars in wealth, but it would also be virtually impossible to achieve. When the wind isn’t blowing and the sun isn’t shining, renewable electricity generation relies on fossil-fuel power to keep the lights on. Currently, the only way to have a 100 percent renewable-energy-powered electric grid would be for Americans to live without power when renewables aren’t producing enough energy. Among many other problems, that means there would be no stable electricity sources for hospitals and other essential services.

Ocasio-Cortez doesn’t merely want to destroy the existing energy industry, the plan also requires “upgrading every residential and industrial building for state-of-the-art energy efficiency, comfort and safety” and “eliminating greenhouse gas emissions from, repairing and improving transportation and other infrastructure, and upgrading water infrastructure.” Ocasio-Cortez’s draft resolution also proposes the elimination of “greenhouse gas emissions from the manufacturing, agricultural and other industries.”

Naturally, her plan includes a whole host of far-left proposals.  According to Haskins, Ocasio-Cortez says her legislation should include “additional measures such as basic income programs, universal health care programs and any others as the select committee may deem appropriate to promote economic security, labor market flexibility and entrepreneurism.”

And, she claims, it would all be paid for the “same ways that we paid for the 2008 bank bailout and extended quantitative easing programs, the same ways we paid for World War II and many other wars. The Federal Reserve can extend credit to power these projects and investments, new public banks can be created (as in WWII) to extend credit and a combination of various taxation tools (including taxes on carbon and other emissions and progressive wealth taxes) can be employed.”

“Together,” Haskins concludes, “Ocasio-Cortez’s proposals would effectively eliminate fossil fuels from most of society, destroy millions of jobs and trillions of dollars of wealth, require ‘upgrading’ every home and business in America, create a national federal jobs-guarantee program, impose single-payer health care (costing trillions more), establish a new system of publicly owned banks, run up the national debt by countless trillions of dollars, and move the United States closer than ever to socialism. If we don’t stop it, it will destroy our economy for a whole generation of Americans.”

Her plan would also essentially destroy America as we know it.

Elections have consequences.  The GOP had better wake up and smell the coffee and they had better fight this tooth-and-nail.