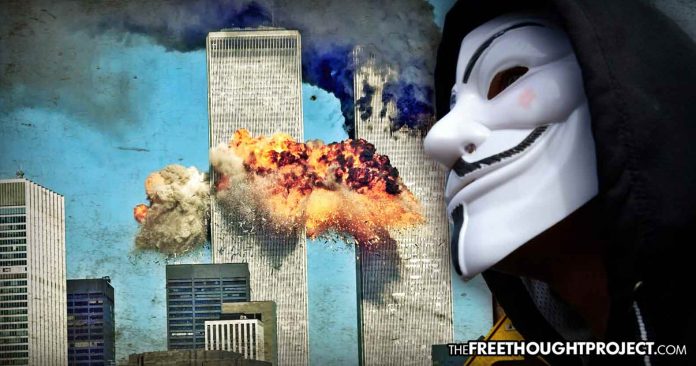 (RT) — The Dark Overlord hacker group has threatened to leak thousands of “secret” documents stolen from insurers and government agencies that they claim reveal the truth about 9/11 – unless they’re paid not to.

The Dark Overlord, a “professional adversarial threat group” known for their hacks of Netflix, plastic surgery clinics, and other sensitive targets, posted a link to a 10GB encrypted archive of documents related to 9/11 litigation, promising to release the encryption keys if their demands were not met in a post on Pastebin on Monday.

The group claims the documents tell the story of what really happened on one of the most notorious dates in recent history, tweeting “We’ll be providing many answers about 9.11 conspiracies through our 18,000 secret documents leak.” They published a “teaser” consisting of letters, emails, and various documents that mention law firms, the Transport Security Administration, and the Federal Aviation Administration, with a promise of more to come.

It’s not just insurance litigation that we have, it’s CONFIDENTIAL, CLASSIFIED, and SECRET documents from FAA, FBI, TSA, USDOJ, and others. pic.twitter.com/7LaC8TaNAQ

They claim to have hacked documents from not only major global insurers like Lloyds of London and Hiscox, but also Silverstein Properties, which owned the World Trade Center complex, and various government agencies. The material, which supposedly includes confidential government documents that were meant to be destroyed but were instead retained by legal firms, allegedly reveals “the truth about one of the most recognizable incidents in recent history and one which is shrouded in mystery with little transparency and not many answers.”

Anyone worried they might be named in the documents can have their names redacted – for a fee, according to the announcement. “Terrorist organizations” and “competing nation states of the USA” are also offered first dibs on the info – if they pay up. Otherwise, the hackers write, the insurers can pay an unspecified bitcoin ransom – or “we’re going to bury you with this.”

Some of the documents were nabbed in an April hack of a law firm associated with Hiscox that the firm acknowledges could have exposed 1,500 of its US commercial policyholders. The Dark Overlord claims that while their ransom was paid in relation to that earlier hack, their victim violated the “agreement” by cooperating with law enforcement, necessitating further extortion.

The group emerged in 2016 with hacks on medical centers, advertising sensitive data for sale on the dark web in order to force victims to pay for its removal. They infamously leaked an entire season of Netflix’s Orange is the New Black last year to prove to that company they meant business and have stolen data from more than 50 companies, according to Vice.