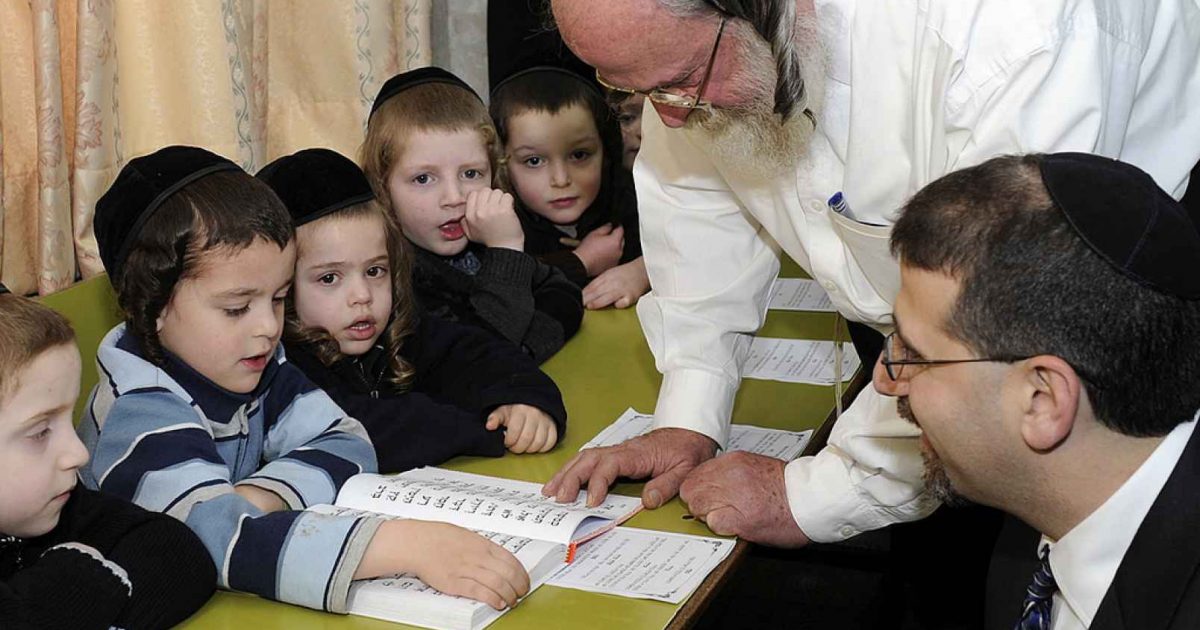 In 2016, a poll showed Trump beating Hillary Clinton 66% to 22% among Orthodox Jews. This wasn’t as unusual as it sounds. In New York City, Orthodox Jewish neighborhoods light up as islands in a lefty sea.

Romney won over 90% of the vote in some Orthodox Jewish areas.

Traditional religious beliefs are associated with conservative politics among Jews the same way that they are among Christians. 60% of Jews who attended weekly religious services disapproved of Obama while those who didn’t, mostly supported him. Why do American  Jews lean much more to the left? Because only 11% of American Jews attend weekly synagogue services. Well below the 40% national average.

Only 34% of American Jews are certain that they believe in G-d. What do they believe in? When asked what it means to be Jewish, 56% mentioned social justice, 42% comedy and only 19% percent mentioned anything involving religion. Meanwhile 63% of Israeli Jews believe “completely” in G-d.

Last year, Trump’s approval rating among Orthodox Jews was at 71%. The American Jewish Committee’s Survey wrote the results up glumly as “We have seen the future, and it looks Orthodox”.

Establishment Jewish groups, which suddenly woke up and realized that the majority of Jewish children in New York City were Orthodox Jews, are preparing to fight that future. If those children are allowed to grow up Orthodox, the end of the Jewish Left will have arrived. And so they came after the children.

The New York State Department of Education now threatens to shut down Jewish schools and report parents who refuse to send their children to leftist government schools to child protection authorities. As in the Soviet Union, giving a child a Jewish education would be treated as evidence of child abuse. The government would be able to abduct children for the crime of receiving a Jewish education.

Jewish schools aren’t the only targets of this discriminatory campaign by the educational establishment. Catholic schools have also come under attack with the Archdiocese of New York posting an editorial that declares, “Leviathan has now focused its attention on religious schools here in New York, with the clear intention of either forcing them to submit to its authority or face destruction.”

The public face of the campaign against Jewish schools is YAFFED or Young Advocates for Fair Education. Its members claim to be the products of Orthodox Jewish schools whose poor education left them so unprepared for the real world that all they were able to do was launch an extremely effective statewide campaign whose press releases and talking points are quoted verbatim in every single media outlet.

As in March for Our Lives, young faces are used to hide the agendas of the old lefties behind the curtain.

While Naftuli Moster, YAFFED’s executive director, plays its equivalent of David Hogg, speaking to media outlets and appearing at forums to discuss the incredible intellectual disadvantage that the same educational system that produced generations of visionary thinkers and geniuses burdened him with, Hannah Rothstein, a not remotely “young” Baruch College prof, serves as its president.

Hannah Rothstein also serves on the board of Footsteps, an organization working to secularize Orthodox Jews and transition them to an irreligious lifestyle. She’s a Trump critic and an Obama supporter.

She has also donated to Barack Obama, Nancy Pelosi, Al Franken, Beto O’Rourke and Cory Booker. Her repeated out of state donations, some through ActBlue, show a woman passionate about the Left. And the growing Orthodox Jewish population poses a threat to everything that Rothstein has been funding.

Moster, YAFFED’s public face, is also a Footsteps graduate. Pesach Eisen, a Yaffed member who testified in its cause, is a Footsteps member and a fellow with the radical leftist Jews for Racial & Economic Justice which denies the existence of lefty anti-Semitism even as it defends leftist anti-Semites. Eisen demonstrates how Footsteps and YAFFED act as arms of the broader anti-Jewish Left.

And Moster has, in turn, defended the anti-Semitic Women’s March.

Anita Altman serves on the Board of Directors of YAFFED and her bio boasts of helping numerous Footsteps clients. In 2014, she had signed an angry letter, declaring, “AIPAC speaks for Israel’s hard-line government and its right-wing supporters, and for them alone; it does not speak for us.” The signatories included a range of anti-Israel activists, supporters of BDS and defenders of anti-Semitic terrorism.

Altman is, unsurprisingly, no fan of religious Jews. In a bizarre interview, which repeatedly warns of a “khasidic takeover”, she complained that there is “fear” when “it comes to government dealing with these fundamentalist communities.” Then she compared Orthodox Jews to Iran.

That’s the medieval bigotry behind YAFFED and the war on Orthodox Jewish schools.

YAFFED’s bid is all about lefties using the government to deal with “fundamentalists” under the guise of helping the few formerly Orthodox members of Footsteps being used as fronts for the hateful operation.

Altman isn’t the only anti-Israel activist in YAFFED. Its communications director, Abigail Beatty, also allegedly works for the anti-Israel NIF, an organization notorious for its funding of leftist and BDS group.

YAFFED claims to advocate for “the rights of Hasidic and ultra-Orthodox children”. But it appears to be another face of Footsteps: an organization advocating against the traditional religious practices of Orthodox Judaism.

The people behind YAFFED have the right to advocate for discriminatory policies targeting the Orthodox Jewish community, in order to force Jewish parents to take their children out of Jewish schools.

They have the right to do so in the name of their radical leftist politics and hatred of religion.

But they have no right to masquerade as an organization fighting for the rights of the very people they are persecuting. Instead of highlighting these obvious connections, the media has chosen to act as the echo chamber for YAFFED while denying the Jewish communities targeted by Altman and her ilk, a voice.

Anonymous stories and bots have been used to manufacture a group of Orthodox Jewish parents and children who are “suffering” in the Jewish school system, but oddly, choose not to leave it.

These astroturf tactics are being used to justify discrimination and harassment of a religious community.

It’s about more than just the bigotry of Anita Altman, obsessed with recreating Philip Roth’s Eli the Fanatic. Behind the fresh young faces, there are elderly veterans of the lefty political establishment, many with backgrounds in education and academia, who see religious Jewish education as a threat.

An economic threat and also a political threat.

In a letter to a Democrat councilmember, David Bloomfield, claimed that the war on Jewish schools would enable their students to “vote outside the confines of their deterministic communities”.

Bloomfield has written a number of articles and appeared at Yaffed forums attempting to pressure the government into cracking down on Jewish schools.

At stake are two very different visions of education and the future.

Secretary of Education Betsy DeVos recently visited Orthodox Jewish schools and touted them as models of school choice. There is no word in the English language that the Left hates more than “choice”.

The education lobby has gone to war against charter schools. And Orthodox Jewish schools are seen as even worse than charter schools. They don’t bow to the teachers’ unions. The money their parents spend on education doesn’t end up in the pockets of union bosses and their Democrat political allies.

The Orthodox Jewish community has helped drive the expansion of voucher programs. And school choice is an existential threat to the educational establishment and the political power of the Left.

Orthodox Jewish communities have fueled support for school choice not only in New York, but in swing states like Ohio, Pennsylvania and Florida, endangering presidential elections.

Something had to be done about those pesky Jews. Now, something is being done.

The Left’s vision of the educational system is Footsteps and Yaffed writ large, a machine for destroying communities, undermining their traditions, and crushing parental authority so that academics can reinvent the children in their own cultural and political image. That’s what happened to American Jews.

Now the same people who a century ago turned a generation of immigrants from believers in G-d to believers in social justice see another Jewish demographic threat and want to do it all over again.

On Sabbath, hundreds of thousands of Orthodox Jews will read the story of how an ancient Egyptian leader grew disgusted with rising Jewish demographics.  “Behold, the numbers of the children of Israel are too many,” he tells his political allies. “Come, let us deal cunningly with them, lest they multiply.”

On Fifth Avenue, the establishment pharaohs, whose faith is not in Isis or Hathor, but in progressive social justice, look at the children in Jewish schools across New York City and bitterly echo his words.