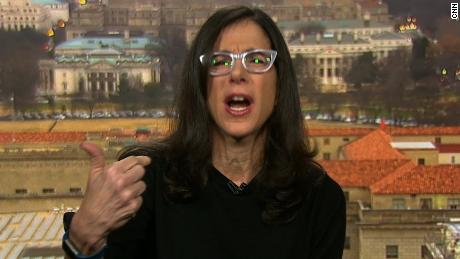 Nancy Pelosi’s daughter issued a political warning to President Trump during an appearance on CNN when she said of her mother, “she’ll cut your head off and you won’t even know you’re bleeding.”

Alexandria Pelosi, a documentary filmmaker, spoke at length about how there are “rules” by which Washington works, including “be nice” and “make friends,” and that Trump has completely ripped apart the rules of engagement.

She was then asked about her mother becoming Speaker of the House for the second time.

“She’ll cut your head off and you won’t even know you’re bleeding,” responded Pelosi, adding, “That’s all you need to know about her, no one ever won betting against Nancy Pelosi, she’s persevered.”

“She was … the Bush, the Bush, the Clinton, you know, she’s been through it all. So she’s been around. This is not her first rodeo, as your friend George Bush would say,” she continued. “So she knows what she’s doing. That should make you sleep well at night, knowing that someone in this town knows what they’re doing.”

Despite constant demands by the media that Trump tone down his rhetoric, CNN hosts Alisyn Camerota and John Berman responded to the provocative language by laughing.

Despite Alexandria’s aggressive confidence in her mother’s political nous, it wasn’t much on display during the 2016 campaign trail when Pelosi boldly asserted, “Donald Trump is not going to be President of the United States….take it to the bank, I guarantee it.”

She went on to claim that Trump was a “here today, gone tomorrow” presidential candidate.