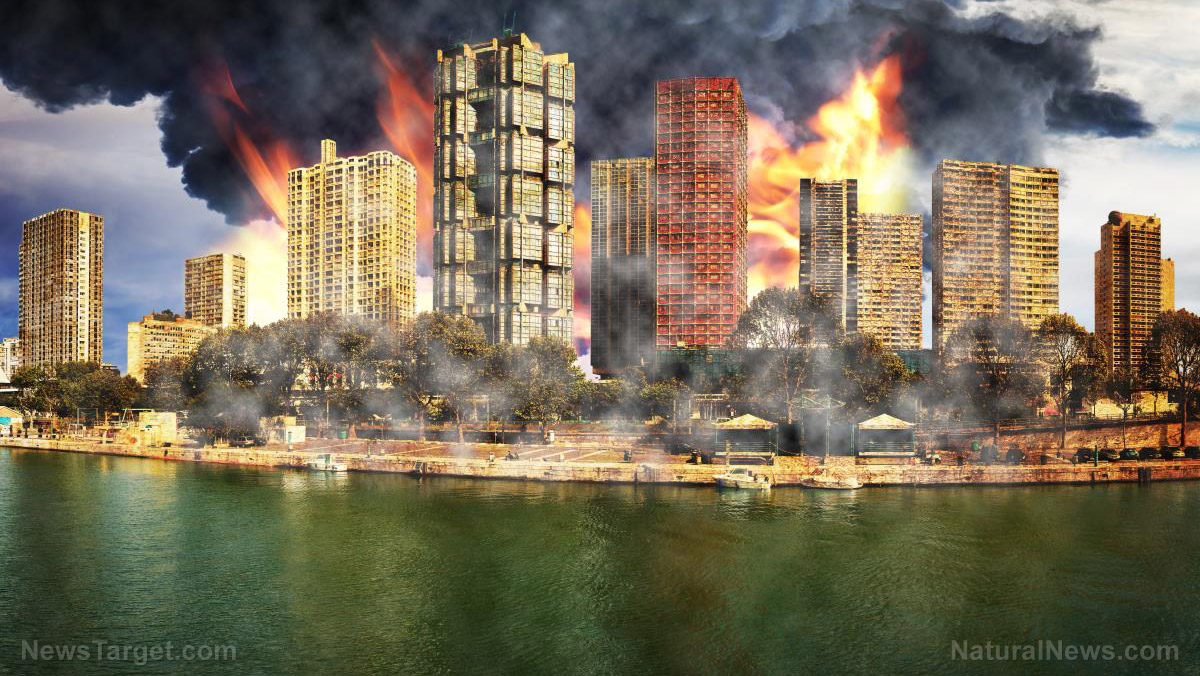 (Natural News) I’ve been putting off writing about events to come in 2019 – 2020 for the simple reason that I don’t think anyone is mentally prepared to accept the level of chaos that’s coming. Perhaps 95% of the population doesn’t give a crap about anything other than their social media posts, celebrity news and fashion shows. Their ability to face reality on any subject — politics, finance, science, ecology, etc. — has collapsed to zero. For the remaining 5%, many of those people are too desperately clinging to financial survival to think seriously about preparedness or collapse. They are already in a collapse emergency of sorts, and they don’t have the mental bandwidth to handle even the thought of another crisis.

It is perhaps the strongest evidence of a collapsing civilization when the signs of collapse are systematically ignored by those most likely to suffer from it. The people who will be most negatively impacted by a stock market crash, for example, will tell themselves they “can’t afford to lose any more retirement money” and thus have to keep holding their stocks and hoping for the best. When I tell these people to sell their stocks and convert to cash or T-bills, they irrationally proclaim, “But I can’t afford to pay the tax on the stock gains I’ve already made!”

Then how, I wonder, will they be able to afford living when half the value of their stocks evaporates over the next two years? Somehow, they’ve become paralyzed by profit and now find themselves incapable of realizing that profit by cashing out. (Remember: No stock market investment profit is real until you sell it. That’s why such profits are called “realized” profits. They are made real.)

Similarly, the very people being poisoned by toxic pharmaceuticals resist adopting healthy food and lifestyle habits, telling themselves they need “their medication” even though it’s the statin drugs, cancer treatments and antidepressant chemicals that are making them diseased and depressed in the first place. Most people are murdering themselves and it’s all based on the bad information they’re being subjected to by a dishonest media that’s almost entirely controlled by corporate and globalist interests.

The primary job of the media, remember, is to convince people to act against their own self interest. Accomplish that takes daily propaganda exposure and heavy saturation of the conscious mind with repeated lies and distractions. Hence CNN.

Leftist Democrats fall into the same trap on the political spectrum, demanding an overpowering, authoritarian government that monitors and controls the lives of individuals, then they wonder why they’re living as slaves under a tyrannical regime. At what point did the people of Venezuela realize they had made a horrible mistake voting for a socialist leader and giving up their gun rights? Similarly, at what point will America’s “progressives” realize they are recreating the policies of the Third Reich under the banner of “progress?”

The road to tyranny is paved with good intentions, and those political candidates who smile too much (or promise too much) are faking it.

If there’s one thing I’ve learned in nearly fifty years of living on this Earth, it’s that almost everyone is delusional in one way or another. All across American society today, what passes as “mainstream” thinking is so horrifically disfigured that it’s almost unbelievable to witness. A biological man, for example, recently claimed to be a “woman” so he could join a women’s football team and dish out man-sized brute force on the play field. When he was cut from the women’s team, he sued… and won.

Under the banner of “feminism,” women’s sports teams are about to be steamrolled across society, dominated by creepy biological men full of rage and hatred, all claiming to be women. Amazingly, progressive women across America support the insanity in the name of feminism and progressivism. So the next time a female football player gets her clock cleaned and her teeth knocked out after enduring a devastating tackle from a 270-lb transgender “woman,” just remember this is what equality looks like in a progressive society.

It’s only going to get more insane, too, as the LGBTP movement — the “P” stands for pedophilia — takes over social media, internet content, Hollywood and cultural institutions. Any person who stands up and says that sexually molesting children is wrong will be banned for engaging in “hate speech” and not loving pedophiles. By the same logic, even serial killers will be canonized by the progressive Left as long as they claim to be gender fluid. They can simply claim to “self-identify” as a transgender human predator, thereby invoking instant legal and cultural immunity for their actions. It rubs the lotion on its skinmay soon be the campaign slogan for a gender-confused Democrat.

These are all signs of the collapse of civilization. On the good news side, these are temporary insanities that cannot be sustained for long, since they violate the laws of nature, biology and reality. On the bad news side, they are leading indicators that prove human civilization has truly gone insane and can no longer function in any manner which is rational or sustainable.

There is no stopping the collapse that has already begun

You’re starting to see the systems of human civilization breaking down everywhere. The labor pool of reliable, young workers in America has all but vanished. Bankers are financial idiots who can’t answer basic questions about customer accounts. Corporate “security officers” who work at insurance companies can’t answer questions about the security of your social security number. Doctors now function as little more than Big Pharma’s human drug dispensing machines, and so-called “journalists” who have infested the corporate-run media are so dishonest and incompetent that they’ve utterly lost the ability to investigate anything at all.

There isn’t a sector of society that is functioning like it should these days. Not even the universities, which have been transformed into snowflake indoctrination centers for the mentally gullible. Young people graduating from college today know less than they did before they entered the school. They become experts in anti-knowledge, or “fake facts” that they think are true. For example, nearly all college graduates today believe that carbon dioxide is a dangerous pollutant that will destroy the planet, yet any honest scientist who graduated a generation earlier will confirm that carbon dioxide is the single most important nutrient for plants, responsible for the “greening” of rainforests, food crops, grasslands and even aquatic ecosystems. CO2 is the molecule of life, yet college graduates have been indoctrinated with anti-knowledge that claims CO2 is a poison.

Simultaneously, actual poisons are believed to be miraculous healers. Smoking cannabis, for example, subjects your body to all the cancer-causing carcinogens of cigarette smoke, yet today’s youth have been brainwashed to believe that cannabis smoke is somehow a health-enhancing magical substance, while cigarette smoke is a deadly poison. Those of us who are older know full well what a 20-year pot head looks and thinks like… and it isn’t pretty. If smoking cannabis healed your brain, Northern California would be full of Einsteins. Instead, it’s collapsing like the rest of the country, only with more pot smoking along the way.

Inhaling burned cannabis is just as damaging to your health as inhaling burned tobacco. Yet tens of millions of Americans currently believe precisely the opposite. (Hint: If you want to benefit from medical cannabis, take it in liquid form or vape it so that you aren’t inhaling smoke generated from burning organic matter.)

I could go on with many more examples of the collapse of modern society, but you’re probably experiencing much of this yourself and therefore need no further convincing. What you really need to know is that society has crossed a tipping point, beyond which a catastrophic collapse — societal suicide — can no longer be reversed.

We probably crossed that point a decade ago with the election of Barack Obama, an America-hating criminal traitor who systematically worked to destroy the United States of America from within. Now, a decade later, we are still trying to stop the hemorrhaging with emergency measures, but the bureaucratic deep state is blocking all such efforts while pointing at Trump and claiming it’s his fault things are going wrong.

From here forward, it’s just a question of the form and timing of the collapse… there’s not even a real debate about whether it’s coming. The systems upon which sustainable society depends are no longer functioning. Across the realms of politics, finance, science, biology, culture, history, news, knowledge and even technology, falsehoods are rewarded while truths are punished. The weak-minded are celebrated while the critical thinkers are terrorized and defamed. The perverted are hoisted on pedestals, while the moral members of society are mocked and censored.

A society that heaps financial reward on the paper pushers on Wall Street while confiscating the life savings of middle-income wage earners through central bank monetary debasement has no future. A society that cannot fund its pension promises for tens of millions of state and federal workers — most of whom are going to lose everything — has no future. A society with federal regulators that promote the mass poisoning of the food supply with GMOs, glyphosate, pesticides and hormone-disrupting chemicals has no future, either.

We are past the tipping point of societal suicide. Every institution operating in America today is engineering self-induced destruction. There is no institution that is operating on reason, planning or even common sense. The DOJ has become a joke of justice; the FBI is the most corrupt law enforcement agenda in American history; the EPA promotes the mass pollution of America’s soils through biosludge; the FDA is a Big Pharma mass drugging propaganda operation; the CDC is a massive science fraud organization that worsens the health of Americans; the IRS is a political weapon that’s used to target political enemies of Democrats. Each of these institutions was founded with the promise to help sustain America, yet each of these now works diligently to destroy society and collapse sustainable society.

This Red Flag Should Be a Campaign Coffin Nail
February 17th, 2020 Sons of Liberty Media

Mitt Romney is aTop Recipient of Funding by George Soros’ Lobbyist...