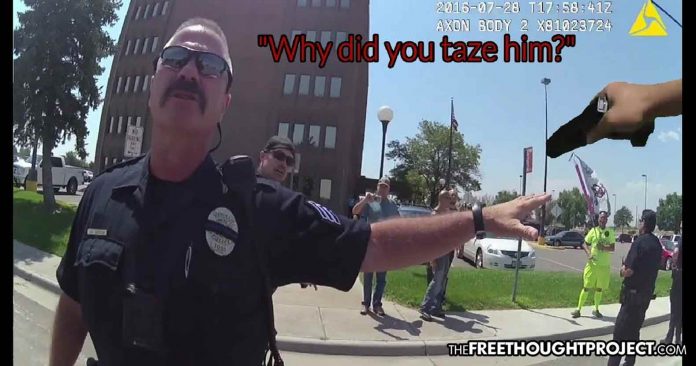 Commerce City, CO — Freedom of speech, in the land of the free, is not guaranteed. Despite the wording of the First Amendment, claiming that “Congress shall make no law…abridging the freedom of speech,” there are countless laws across the country designed to do exactly that. However, even when there aren’t archaic anti-speech laws on the books, police will all too often deprive people of their freedom — for practicing their freedom.

Because police attack people for their freedom of speech, the taxpayers are often held to the fire to pay for the violation. Such is the case out of Commerce City in which Joshua Condiotti-Wade just received $175,000 — for holding a sign that said “F**k bad cops” — and getting assaulted for it.

In 2016, Condiotti-Wade and Eric Brandt fashioned signs to express their opinion on police and went to the Adams County Human Services building — a public property. As the two men protested with their signage, someone inside the building became offended and called police.

As Condiotti-Wade’s attorney, David Lane, explained to Westword, “Somebody inside called the Commerce City police, and these two cops” — officers Chris Dickey and Ryan Sedgwick — “came up to them and said, ‘You guys have been asked to leave. You need to pack it up.’”

At first, Brandt chose to assert his right to be on public property but after some threats by the officers, the two men walked to the sidewalk. It should have been over at this point, but officer Dickey persisted and then demanded Condiotti-Wade — who never said anything — show him his ID. When he refused, all hell broke loose.

Lane explained that “the body cam shows the cop made a move toward Josh and fell. I guess his shoes were slick, because Josh didn’t do anything to him, didn’t touch him. But when the cop got up, he was pissed, and he and the other cop started chasing Josh and began to fire tasers at him. One of them hit him in the arm, but that didn’t complete the circuit — so he was running around with a taser dart in his arm.”

It was around this point that something amazing happened, however. Dickey’s supervisor, Commander Mark Morgan came out and put an immediate stop to the rights violations. The dialog was as follows:

Morgan: “Why are you chasing him?”

Dickey: “For trespassing and disorderly conduct.”

Dickey: “When he’s in front of the building yelling, ‘Fuck everybody….’”

Dickey: “He refused to give his ID…which he’s required to do.”

Dickey: “So I can issue him a citation for trespassing.”

As he’s getting put in his place by his supervisor — who appears to respect the constitution to which he swore an oath — Dickey then turns off his body camera to prevent recording any further.

Just like that, the incident was over and no arrests or citations were made. However, the taser dart in Condiotti-Wade’s arm was not coming out and he had to have it surgically removed at the hospital. This paved the way for the lawsuit which would end successfully for Condiotti-Wade in December.

According to Lane, Dickey is no longer with the department. “I believe he resigned because he had several complaints about using his taser in the past,” Lane said. However, this gypsy cop was quickly picked up by the Elbert County Sheriff’s Office where he’s currently employed.

Should these gentlemen have been polite to the officers? Of course. However, being an asshole is not illegal and a person’s right to nonviolent speech should never be removed.

In the land of the free, a person can be kidnapped and thrown in a cage for arbitrary sounds made with their mouth that cause harm to no one.

Aside from this being clearly asinine, it’s well-established by the Supreme Court to be unconstitutional.

In Cohen v. California, the U.S. Supreme court upheld a citizen’s First Amendment right to wear a jacket to court that read “Fuck the Draft,” the court held:

“For, while the particular four-letter word being litigated here is perhaps more distasteful than most others of its genre, it is nevertheless often true that one man’s vulgarity is another’s lyric. Indeed, we think it is largely because governmental officials cannot make principled distinctions in this area that the Constitution leaves matters of taste and style so largely to the individual.”

What’s more, the U.S. Supreme Court ruled, in City of Houston v. Hill, that police must tolerate even more abusive speech than an average citizen. The court concluded that “in the face of verbal challenges to police action, officers and municipalities must respond with restraint,” and added that, “the First Amendment protects a significant amount of verbal criticism and challenge directed at police officers.”

Here at the Free Thought Project, we feel there are no such things as ‘bad words’ but, rather, certain words some people don’t like to hear.

The arbitrary nature of government enforcing laws that dictate what vocabulary a person can use is as ridiculous as it is tyrannical. Sadly, it remains a part of society.

Telling people what words they can and can’t say to ‘protect’ others is chilling. Freedom of speech does not come with terms and conditions as words alone, less the obvious yelling “fire” in a movie theater, cannot cause physical harm.

Have we learned nothing from history?