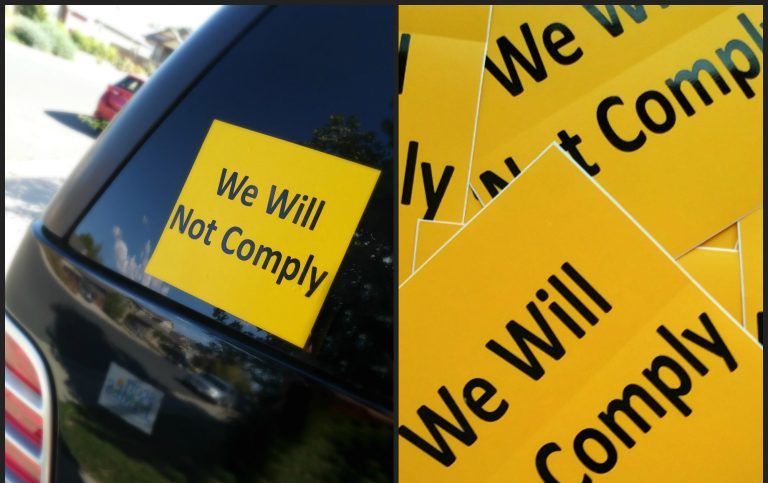 As we reported back in May, Boulder, Colorado didn’t bother to put their gun ban legislation on the ballot. They simply voted it in against many in their own community. But now, in the new year, there are more weapons that have not been turned in, than those that were given back. Only 342 semi-automatic rifles were turned in for “certification” (aka “registration).  And Boulder has a large gun owner community. Lawsuits against the ordinance have been filed.

The gun owner community isn’t taking it lying down, either.  Though many are quietly refusing to turn in their weapons, some of the residents have begun a “We will not comply” movement meant to openly challenge authorities. A business owner had “We will not comply” stickers and T-shirts printed up that are now appearing on cars, rifle bags, and other items.

According to the Washington Times,

The ordinance, approved by the city council unanimously, banned the possession and sale of “assault weapons,” defined as semiautomatic rifles with a pistol grip, folding stock, or ability to accept a detachable magazine. Semiautomatic pistols and shotguns are also included.

Current owners were given until the end of the year to choose one of two options: Get rid of their semiautomatics by moving them out of town, disabling them, or turning them over to police — or apply for a certificate with the Boulder Police Department, a process that includes a firearm inspection, background check and $20 fee.

Judging by the numbers, however, most Boulder firearms owners have chosen to do none of the above, albeit quietly.

We wrote previously about Jon Caldara, who was opposed to the ban from the beginning. He openly refuses to comply.

“The question was, do I do this publicly or do it privately, and I’ve chosen to do it publicly because somebody has to. There will be thousands of people in Boulder living in the shadows, worried about somebody turning them in.

In this town that spouts tolerance for alternative lifestyles, that actually puts posters all over its buildings and schools about it, when it comes to a lifestyle they don’t like, there is no tolerance. So for me, this all works around the word tolerance. And tolerance means tolerating things you dislike, that you find scary.

Without a doubt, there are more than 342. I think potentially there are thousands.” Jon Caldara

Mr. Caldara has a great deal to lose by not complying openly- he has two children, one of whom needs 24 hour care. And he is afraid, but he believes someone has to do it.

Lesley Hollywood, president of “Rally for Our Rights”, a Colorado gun group, said that the number of 342 is so low that it could just be a handful of residents “certifying” several weapons. But the deadline to do that was December 31, so whoever is left over now is automatically in violation of the ordinance.

The city claims they are not going door to door to find violators. Good thing. That could be exceedingly dangerous for everyone.