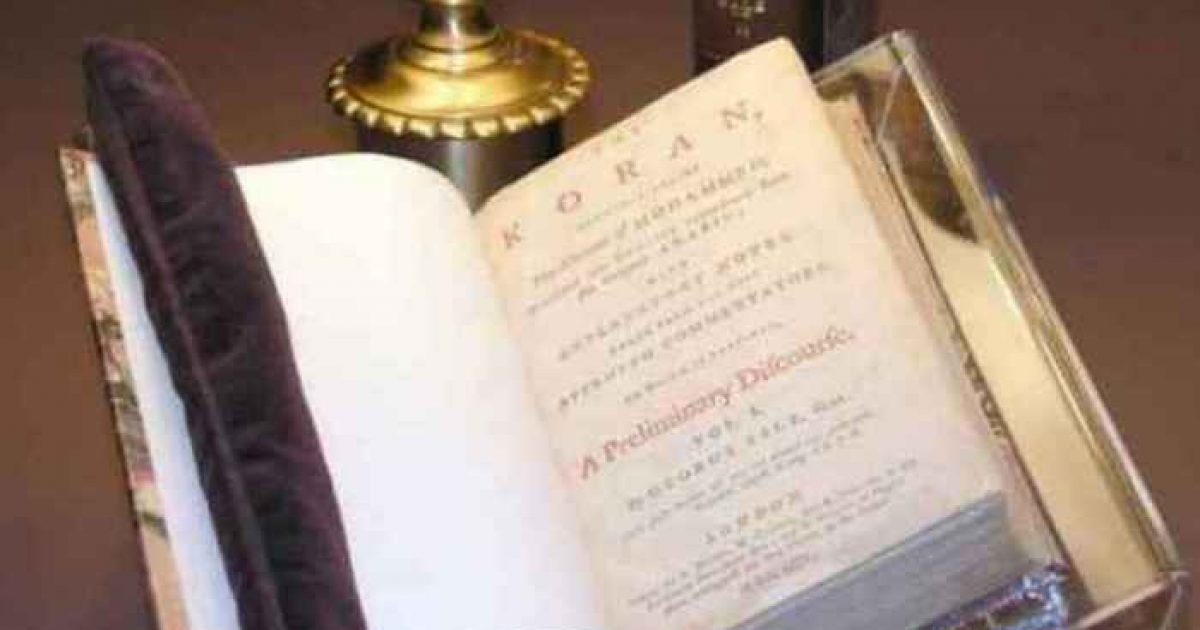 I read an article yesterday from the Daily Wire which I was just going to reprint. Then I read it and thought, rather than just post the article, I should set the record straight by adding some context.

The article is simply about newly elected Muslim Congresswoman, Rashida Tlaib (D-MI), who decided to take the oath of office using, not the Bible, but the Koran. And not just any Koran, but Thomas Jefferson’s Koran.

I encourage you to first read the Daily Wire piece, which gives an accounting, without commentary, of the swearing in and why she used Jefferson’s Koran.

Then come back and read the actual historical accounting of why Thomas Jefferson owned a Koran.

For more than a century and a half prior to America declaring its independence from Great Britain, the Muslim pirates of the Barbary Coast (North Africa) had been invading European settlements, villages and capturing merchant vessels from the Mediterranean Sea, to the Atlantic coast of Europe and the English Channel. Thousands upon thousands of Europeans were sold into slavery as laborers and concubines throughout the Islamic world. Most would never be seen again.

In 1631, a small fishing village of 400 people, at the Southern tip of Ireland, named Baltimore, was captured by Algerian Muslim pirates. Every villager was taken, with only two ever to resurface.

Over decades, the many thousands who were not sold off were held for ransom, as were ships and goods. The U.S. government, under presidents George Washington and John Adams paid a small fortune in ransom, or tribute, in an attempt at keeping shipping lanes open. At one point, almost 20 percent of the entire United States federal budget was consumed by tribute payments to the Barbary Muslim pirates.

To this point, Westerners were relatively ignorant of Islam and the Koran.

In 1786, as part of an American Commission, Thomas Jefferson traveled to Tripoli, now the capital of Lybia, to meet with the Muslim Ambassador. Jefferson sent correspondence to John Jay chronicling the meeting. He told Jay that he asked the Ambassador what they had done to deserve such treatment.

“We took the liberty to make some inquiries concerning the Grounds of their pretentions to make war upon Nations who had done them no Injury, and observed that we considered all mankind as our friends who had done us no wrong, nor had given us any provocation.”

The Ambassador’s retort was quite revealing.

“The Ambassador answered us that it was founded on the Laws of their Prophet, that it was written in their Koran, that all nations who should not have acknowledged their authority were sinners, that it was their right and duty to make war upon them wherever  could be found, and to make slaves of all they could take as Prisoners, and that every Musselman [Muslim] who should be slain in battle was sure to go to Paradise.”

It was after this meeting that Jefferson purchased his now famous copy of the Koran. It was not to glorify Islam or find anything in common, but to better understand the Islamic enemy.

On March 4, 1801, Thomas Jefferson was sworn in as the third president of the United States. The first Barbary War began shortly after on May 10, 1801 when Jefferson declared his refusal to continue to pay tribute to the Muslim Rulers. It lasted until June 10, 1805 and was the new nation’s first war. The second Barbary war against the North African Barbary Coast states of Tripoli, Tunis, and Ottoman Algeria, began June 17, 1815 and lasted only until December 5, 1815, when the United States Senate ratified Commodore Stephen Decatur’s Algerian treaty.

Out of these wars came the Marine Anthem and their nickname, “Leathernecks,” derived from the thick leather neckbands worn to protect Marines from the slash of the Muslim cutlass.

Knowing the history of Jefferson’s Koran sheds light on the foolishness and ignorance of the new representative from Michigan, Ms. Tlaib. Too bad really.