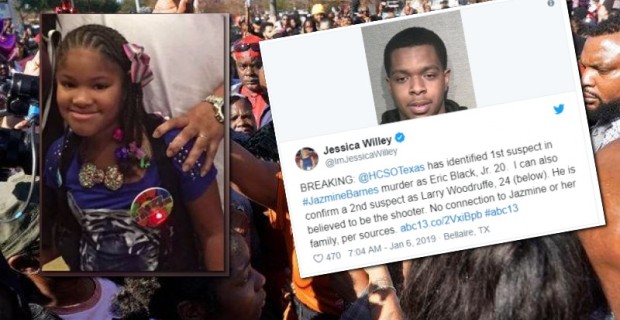 The investigation into the shooting of a 7-year-old girl in Houston, Texas that civil rights activists and left-wing media sites asserted was a white supremacist hate crime took an unexpected turn when it was revealed that the gunman was a 24-year-old black man.

Jazmine Barnes was killed in the back of her mother’s vehicle after the family were fired upon on the East Sam Houston Parkway feeder road near Wallisville Road at approximately 6:50 a.m. last Sunday.

Jazmine’s sister described the shooter as a “bearded white man in his 40s wearing a red hoodie,” setting off a media narrative that the murder was a racist hate crime.

Police subsequently released a sketch asserting that the suspect was a white man in his 30s or 40s.

This is the man witnesses say murdered 7-year-old Jazmine Barnes on 12/30 as her family drove on the E. Sam Houston Pkwy frontage road at Wallisville Road. Thin white man, 30's-40's, in a red pickup. Call 713-221-6000 or @CrimeStopHOU at 713-222-TIPS #JusticeForJazmine #hounews pic.twitter.com/URR3w2Wxbm

Black Lives Matter activist Shaun King also offered up a $100,000 reward for information leading to an arrest and arranged a rally to call for justice.

Left-wing news outlets like Vox breathlessly reported the claims without question, asserting that “Jazmine Barnes was killed when a white man fired into her family’s car.”

Time Magazine also reported the assertion of the family’s attorney Lee Merritt that the murder was a racist shooting, while the Washington Post amplified his demand that, “We want to emphasize the racial nature of the attack and that hate-crime charges are appropriate.”

However, it now emerges that the gunman was black.

“Sources tell ABC13 Larry Woodruffe, 24, has been arrested as a second suspect in the case. Those sources say Woodruffe is believed to be the shooter,” reported Jessica Willey and Deborah Wrigley.

Willey tweeted a photograph of Woodruffe, who is clearly African-American.

BREAKING: @HCSOTexas has identified 1st suspect in #JazmineBarnes murder as Eric Black, Jr. 20. I can also confirm a 2nd suspect as Larry Woodruffe, 24 (below). He is believed to be the shooter. No connection to Jazmine or her family, per sources. https://t.co/wnaXDXVOO0 #abc13 pic.twitter.com/YsYvUSZX4g

“Sources say the alleged shooter is black, not white, and also that the shooting may have been gang-related,” reports Fox 26.

Another suspect who was thought to be driving the vehicle, Eric Black Jr., has also been arrested. He was also black.

The killers of the beautiful 7-year-old who was murdered in Houston, Jazmine Barnes, turned out to be two gang members and the white man initially blamed was an innocent bystander trying to escape the shooting. Here are the 2 men arrested for her death. pic.twitter.com/RUm0rwu7Il

All week the media insinuated that the death of Jazmine Barnes was a hate crime committed by a white man. Now that it’s proven not to be a white man who killed her I notice that suddenly the race of her killers is not in the headlines anymore. This is why so few trust the media. pic.twitter.com/4FTSgORNBr

Despite Merritt asserting that there was “no rationale for the attack other than hate,” investigators now say that shooting was probably a result of mistaken identity.

The ABC13 report that names the gunman as African-American notes that, “The story has captured the attention of community members, celebrities and activists around the world,” but fails to explain how they all got it monumentally wrong in order to push a divisive, race-baiting narrative.

Note how CNN and other media outlets make no mention of the fake media narrative that circulated for a week that the tragic murder of Jazmine Barnes was some kind of racist hate crime. The gunman was black. Now expect this story to disappear quick. https://t.co/zQNmhv2SnY

Twitter users responded to developments by asking if there would be any follow up on the people who falsely claimed the shooting was a white supremacist hate crime.

“Are you going to investigate the person who lied to officers and said the shooter was a blonde haired, blue-eyed White guy? Giving false information to cops is a crime,” said David Wohl.

Hey Jess, Are you going to investigate the person who lied to officers and said the shooter was a blonde haired, blue-eyed White guy? Giving false information to cops is a crime.

“There’s no doubt that this is a tragedy. However, the ONLY reason that this story garnered as much national attention as it did, was because the family said the shooter was white. Which gave possible credence to this being a potential hate crime. Watch how quickly this disappears,” remarked another user.

There’s no doubt that this is a tragedy. However, the ONLY reason that this story garnered as much national attention as it did, was because the family said the shooter was white. Which gave possible credence to this being a potential hate crime. Watch how quickly this disappears

Shaun King was forced to admit that the ‘white man’ was actually “an innocent bystander who fled, actually fearing for his life as well. He was not the shooter.”

It appears that man was an innocent bystander who fled, actually fearing for his life as well. He was not the shooter.