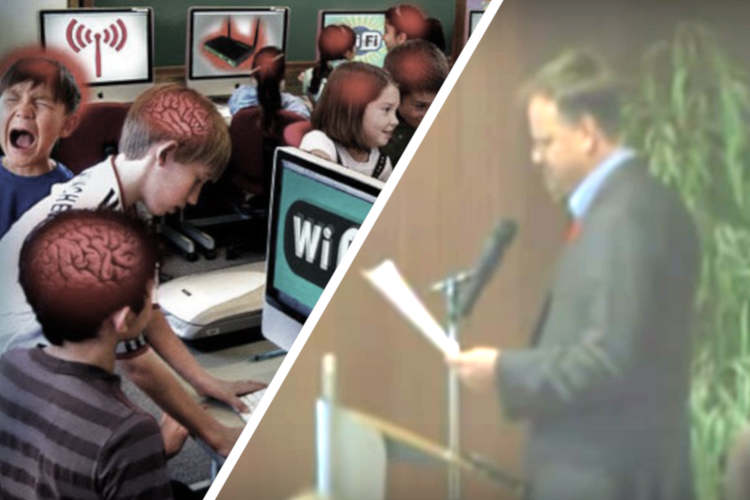 Wireless technology is largely seen as benevolent and kind. Any danger to our health is typically passed off to the next generation to figure out, regardless of the consequences that have happened already. This story has played out many times in the past, whether it be DDT, cigarettes, or leaded paint. However, as Wifi proliferates throughout our schools with potential dangers for our children’s health, some are courageous enough to fight back against this under-studied science.

Rodney Palmer, an award-winning Canadian journalist and Communications Advisor at the Safe School Comittee, has been speaking out about the dangers of Wifi in public schools since at least 2010.  In a presentation to the Royal Society of Canada, he spoke about a wifi disaster at a public elementary school that injured dozens of students. The story is quite remarkable.

“When the schools installed the wifi, we found out that at least four children had erratic tachycardia [fast or irregular heart rate] that confounded their doctors and they were wearing heart monitors to school. The older children…told us they had blackouts in certain areas of the school.” – Rodney Palmer

Do children have a particularly low resistance to wireless radiation? According to Rodney Palmer, many school-aged children report a negative reaction from exposure to Wifi since its introduction to public schools. These children cite headaches, irregular heart rate, and blackouts as potential reactions to the technology.

“Anyone could make the argument that you could safely spray any amount of pesticide on any person for any amount of time, although that once thought to be okay, and that’s the current government thinking with microwave radiation.” – Rodney Palmer

If you’re an adult and you want to have Wifi in your house, you can make the decision about whether you want to use a technology that may harm your health; that’s part of what it means to be free. However, the story starts to change when we talk about children.

Most parents would do anything that they can to keep their children safe, and if getting rid of Wifi at home does the job then so be it. But when children are in places where they are forced by the government to spend most of their childhood, it’s no longer up to the parents to aid their child’s health. It’s up to a bureaucracy which likely doesn’t have the same agenda as the parent. In one school’s case, they told the parents that there was no other option.

“The Simcoe County District Schools Board said no. They said the children must be exposed to Wifi at school. Even the children who were sick and presented to the school board themselves were told no, you may not plug your computer into the wall. You must sit all day in a sea of microwave radiation.”

Because of safety code 6 in Ontario, the school board does not have to acknowledge a parent’s complaint about this issue because the code considers the radiation to be completely safe. However, appropriate long-term testing has not been done to determine whether some children are affected negatively by wireless radiation.

“So, we were right! Our kids were sick at school and nowhere else. There was no mold problem, no recent renovation, chemical building materials. Only a newly installed massive WIFI system. They measured and found that radiation created by the WIFI exceeded Safety Code 6 thermal threshold by 34%. And that explained how my son came home from school with hot ears every day. He was being cooked by microwaves.

School WIFI operates at 2.4 GHz, the same frequency as a microwave oven.

So, did they shut it down?

Did they alert the teachers? Parents? Students?

No, the Simcoe County District School Board kept it quiet. They told no one. They downplayed the results as insignificant and failed to tell the parent who were BEGGING for answers.

Unfortunately, in many western countries, children are given few options as to where their education may take place. In the UK, laws have been introduced forcing parents to pay fines of up to £120 because of their child’s tardiness to school. This type of law appears to be popping up around the world, where parents are granted littler control over the life and health of their child.

“The ‘weight of evidence’ model is weighted in favor of science payed for by the wireless industry. As you all know, science can be manipulated, but cardiac arrest can’t.” – Rodney Palmer

This article (Award Winning Journalist Exposes Wifi Disaster in Canadian Public School that Injured Dozens of Children) was originally created and published by Waking Times and is published here under a Creative Commons license with attribution to Phillip Schneider and WakingTimes.com. It may be re-posted freely with proper attribution, author bio, and this copyright statement.