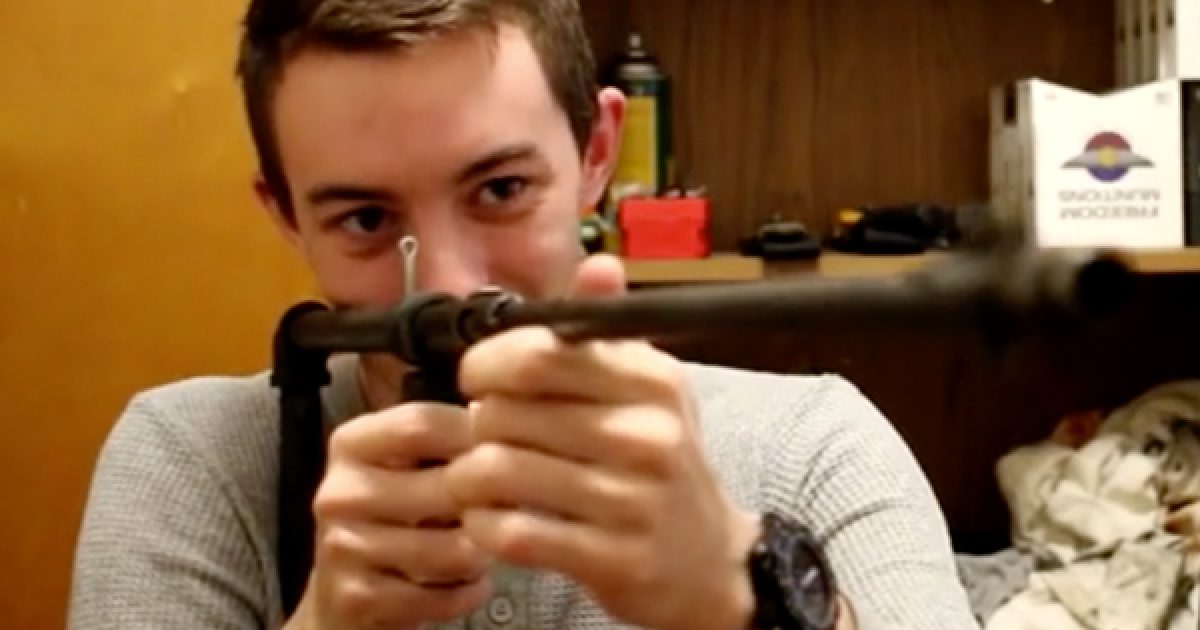 Yes, every time that government seeks to overstep its bounds and do things it was never intended to do or ban certain items, they simply spark human ingenuity and entrepreneurship to work around their pretended legislation.  In this case, government decided to engage in an unlawful “buy back” of guns with taxpayer money, something they are not authorized to do.  One entrepreneur in Missouri had his eye on new guns and decided that he could put together scrap metal as guns and sell them off to the “no questions asked” buy back program for cash to purchase new ones.  He succeeded.

The story comes by way of LawEnforcementToday.com, where Sgt. A. Merica provides the details of what happened.

A Missouri man sold his firearms made out of scrap metal and garbage to a gun buy-back program…  and then used the money to buy a real gun.

We call that man a “patriot”.

YouTuber Royal Nonesuch made a quick $300 by taking 3 firearms that he’d built out of scrap and selling them back to the state of Missouri. He described two of the pipe guns as the ‘crappiest guns I’ve ever made’ but was still able to successfully sell them off to the program.

Watching the video that Nonesuch posted, it was immediately clear that the coordinators of the events did not plan or organize as well as they should have. You can see him walk up to a man in a car to get the cash, who relayed information by yelling to another event coordinator.

“I had 3… they’re in that guy’s car,” Nonesuch told the man, who handed over the $300 without confirming or inspecting the guns for himself. “Here you go… go away,” the man says during the transaction.

Nonesuch was literally able to sell pieces of scrap metal and garbage back to the ‘no questions asked’ program with an intention to purchase a rifle or pistol from a pawn shop after the sale. He stated to his followers that he would post again when he settled on a new gun to purchase.

The ‘guns’ that he sold included a .22 zip-gun style rifle as well as a 12-gauge grappling hook gun. They were functional but by no means a practical weapon or method of defense.

During the buy-back program, the guns were bought out of the coordinator’s cars, as the building that hosted the event was a gun-free zone, which we know from history is incredibly effective at keeping areas safe and gun-free (sarcasm).

Moreover, the event cost over $4,000 but coordinators had only raised about $1,500.  I wondered if it was legit or not, but only bureaucrats could be this dumb and fiscally irresponsible.

This is absolute genius on the man’s part!

However, the underlying issue here is that often gun confiscating politicians do something that makes them feel like they are doing something good and helpful, and will prevent crime, but that is never the case.  All actions that target arms of any kind are off limits to government per our Constitution and they always result in targeting law-abiding citizens, advancing crime in many cases and wasting taxpayer dollars.  Sometimes it even costs people their lives.

Even this officer who was recounting the story understood the stupidity of politicians who engage in this kind of behavior.

And so I’d like to congratulate the Democrats who came up with this program.  Not only did I get some hefty police overtime, but they helped ensure that broken guns came off the street… and some sexy new pistols made it back onto them.

He even pointed out that in these buy back programs, 9 times out of 10, the guns that are brought in for cash or gift cards don’t function anyways and this is a way for someone to get more for the weapon than they would at a pawn shop or another individual.

Buy back programs are unlawful and a waste of taxpayer money.  As the officer stated, they also cost the taxpayer in overtime that officers spend in being on the clock during the buy backs and never obtain the desired results.