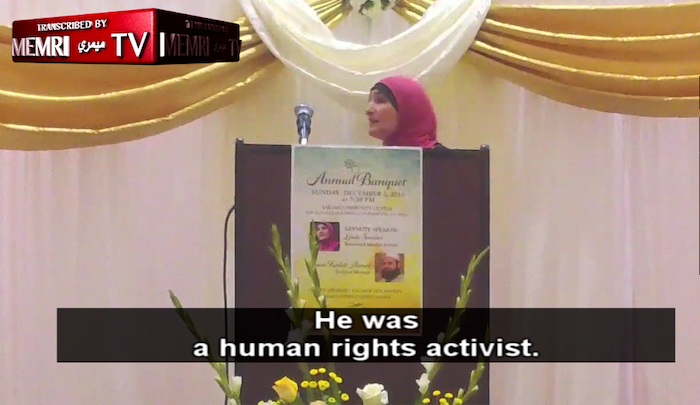 Linda Sarsour’s lies keep getting more extreme. If Muhammad was a human rights activist, why is every single country in which Muhammad is revered as a prophet and an “excellent example” a human rights disaster? Why do so many of those who proclaim that they follow Muhammad as closely as they possibly can hate Jews, dehumanize women, and have contempt for non-Muslims? Why is there conflict between Muslims and non-Muslims, started by the Muslims, in every country where both are found? Linda Sarsour is peddling propaganda and fantasy, and the left laps it up eagerly.

“U.S. Political Activist Linda Sarsour: The Prophet Muhammad Was a Human Rights Activist; We Don’t Need the West to Teach Us about Feminism,” MEMRI, December 13, 2018:

On December 2, 2018, American political activist Linda Sarsour spoke at the 2018 Salam Annual Banquet, which was held at the Salam Community Center in Sacramento, CA. She criticized President Trump for moving the American embassy to Jerusalem, saying: “I declare to all of you here today in Sacramento that Jerusalem is and always will be the capital of Palestine.” She said that the Trump administration is fascist and encouraged Muslims to become involved in politics even if their mosques usually avoid politics, because simply being Muslim is a political act. She said that the Prophet Muhammad was a human rights activist, and that there is no need for workers’ rights movements, environmental justice movements, Black Lives Matter movements, anti-racism, or feminism because Islam has taught these values long before they were hashtags or movements. She added: “I don’t need people in the West, people in Europe, or people in the United States… to teach me what feminism is.” The video of Sarsour’s speech was uploaded to the Salam Center’s YouTube channel on December 13, 2018.

Linda Sarsour: This administration also went against the international community and thought it was a good idea to move the American embassy to Jerusalem. This President stood up and declared, and thought it was just about words, [and] that he has so much power that he can stand up and declare that Jerusalem is the capital of Israel. Since he thinks it’s as easy as words, I will declare to all of you here in Sacramento that Jerusalem is and always will be the capital of Palestine.

This administration is not like any other administration. We are talking about a time in the United States of America when we are living under fascism. These are fascists.

I go to a lot of mosques or community centers and this is what they say to me. They say: “Sister Linda, we know that you’re very political, but in my mosque, we try not to be too political. We don’t like politics here.” This is what I want you to tell anybody who says to you: “I’m not political, I don’t know about politics, I don’t know if I want to engage in politics, at my mosque that I go to they aren’t really political…” Here’s my answer to these people. If you woke up this morning, and you are breathing and you are Muslim, [then] you’re political.

I tell people all the time that I went to public school. My parents couldn’t afford to send seven children to Islamic school. But on the weekends, we went on Saturdays and Sundays to Islamic school. As I grew older, I realized that I got cheated out of my Islamic education.

You know what I feel like I got cheated out of? Nobody told me that my beloved Prophet Muhammad was an activist. He was a human rights activist.

We don’t need a workers’ rights movement or an environmental justice movement. We don’t even need a Black Lives Matter movement, because our religion has taught us that black lives mattered way before there was ever a hashtag, or a movement, or people protesting outside on these streets. Our religion has always been an anti-racist, feminist, and empowering religion. I don’t need people in the West, or people in Europe, or people in the United States of America to teach me what feminism is.