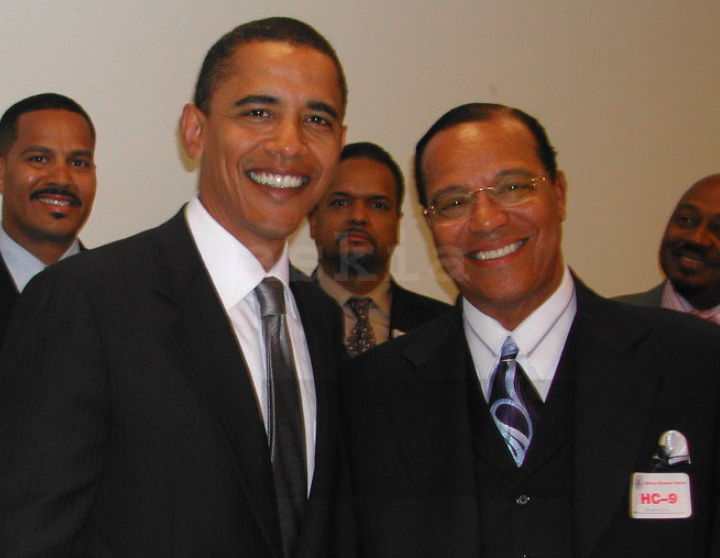 Out of control government. Why would a racist, violent, dangerous organization like the Nation of Islam be receiving taxpayer dollars in the first place?

“The federal government should not use taxpayer dollars to subsidize one of the most infamous hate groups in the United States,” said Rep. Vern Buchanan (R-Fla.). “That’s why I’m demanding your department immediately cease all contracts with the Nation of Islam and prohibit it from receiving any contracts in the future.”

CONGRESSMAN CALLS FOR HALTING FEDERAL FUNDS TO NATION OF ISLAM

The Washington Examiner first reported this development and the funding of “at least $364,500 in contracts and awards” from the DOJ and the U.S. Bureau of Prisons between fiscal 2008 and fiscal 2019.

“The federal government should not use taxpayer dollars to subsidize one of the most infamous hate groups in the United States,” said Rep. Vern Buchanan (R-Fla.). “That’s why I’m demanding your department immediately cease all contracts with the Nation of Islam and prohibit it from receiving any contracts in the future.”

“The fact that hard-earned American tax dollars are being funded to this extremist group is not only unacceptable, it’s downright immoral,” the congressman wrote in a letter on Monday to Acting Attorney General Matthew Whitaker.

“As you may know, the Anti-Defamation League and the Southern Poverty Law Center have designated the Nation of Islam as a hate group for its racist and anti-Semitic beliefs,” he continued. “Nation of Islam leader Louis Farrakhan has used hateful rhetoric pronouncing that ‘Hitler was a very great man’ and routinely denounces Jews and white people as ‘evil.’ ”

“The federal government should not use taxpayer dollars to subsidize one of the most infamous hate groups in the United States,” said Buchanan. “That’s why I’m demanding your department immediately cease all contracts with the Nation of Islam and prohibit it from receiving any contracts in the future.”

The Bureau of Prisons declined to provide specifics to The Washington Examiner about the funding, citing a regulation that federal correctional institutions “may contract with representatives of faith groups in the community to provide specific religious services which the chaplain cannot personally deliver due to, ordinarily, religious prescriptions or ecclesiastical constraints to which the chaplain adheres.”

“The Nation of Islam considers whites to be devils and aspires to break off a blacks-only country from the United States. It’s an ugly phenomenon that minimally overlaps with the normative religion of Islam,” Middle East Forum president Daniel Pipes told JNS. “It’s not exactly something the American taxpayer should be subsidizing.”

The Republican Jewish Coalition, the National Council of Israel and the Endowment for Middle East Truth (EMET) commended Buchanan’s letter.

“We share Congressman Buchanan’s interest in getting answers to the troubling questions raised by the Examiner’s report,” RJC spokesperson Neil Strauss told JNS.

“Because we believe that the Trump administration agrees with Rep. Buchanan that the federal government ‘should not use taxpayer dollars to subsidize one of the most infamous hate groups in the United States,’ we are confident that these serious concerns will be addressed promptly and definitively,” he added.

“We completely support the efforts of Congressman Buchanan and share his outrage,” National Council of Young Israel president Farley Weiss told JNS. “We supported the [FIRST STEP Act] and see contracting with this anti-Semitic organization as being the antithesis of rehabbing prisoners. We call for such funding to be stopped.”

“EMET applauds Rep. Vern Buchanan’s call on the DOJ to stop funding the highly anti-Semitic, racist group, the Nation of Islam. Under the leadership of renowned anti-Semite Louis Farrakhan, the Nation of Islam regularly disseminates conspiracy theories about Jews and the State of Israel,” the organization’s founder and president, Sarah Stern, told JNS.

“In one instance, Farrakhan said, ‘Satanic Jews have infected the whole world with poison and deceit’ and are his ‘enemy.’ In another, he exclaimed, ‘I am not an anti-Semite, I am anti-termite,’ comparing Jews to sub-humans, indeed to parasitic insects,” she continued.

“It is outrageous that the U.S. government would fund such a despicable group to propagate its hateful rhetoric, and as Rep. Buchanan has expressed in its letter, federal funding for the Nation of Islam must be halted immediately,” she added.

Zionist Organization of America president Mort Klein echoed the above sentiments: “Rep. Buchanan is correct –– why on Earth would the federal government give taxpayer dollars to the Nation of Islam, a group that has been identified for decades as a vicious hate group, led by the notorious black supremacist and anti-Semite Louis Farrakhan?”

He continued, “Would we ever fund a program under the auspices of racist David Duke? Of course not!”

“It is irrelevant that the money allegedly goes towards the NOI giving religious studies for prison inmates,” added Klein. “And this funding only strengthens and gives legitimacy to Farrakhan’s bigoted organization.”

He also mentioned, “In [light] of the fact that the NOI is a hate group, one should have the gravest concern as to what the NOI teaches prison inmates. In any event, taxpayer funding of NOI should cease at once.”