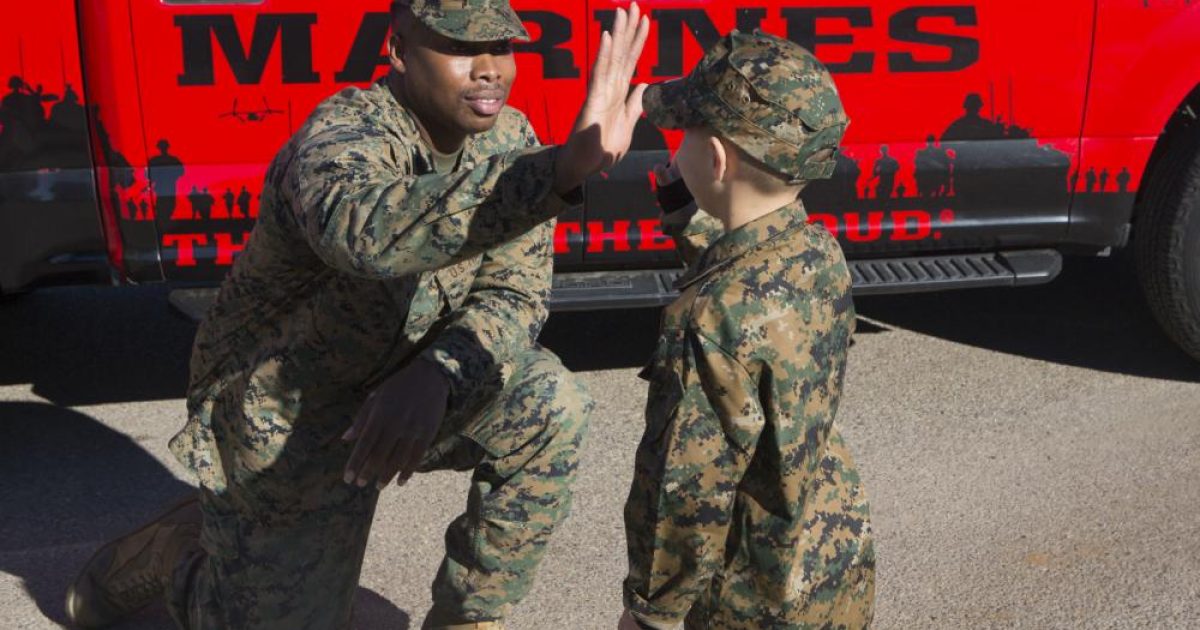 Six year old Alec Rubio struggles with motor skills and has lost most most of his vision. He was diagnosed in June of 2018 with ALD or adrenoleukodystrophy, a rare disorder that has no cure. But one thing he has never lost: his love of the military. His uncle, Warrant Officer Brandon Cain, a utility and motor transport maintenance officer with MWCS-38, decided to set up a special time for Alec: to make him an honorary Marine.

“Due to the nature of the disease and how aggressive it can be, my wife and I talked and we decided we were going to set something set up for him. He’s always wanted to be in the military so we figured, ‘Why not get him in with the best?’” Brandon Cain

They had to do it soon. The Corps had less than a month to set it up. Alec was scheduled to go into the hospital in January and be in for a long time. The Marine Corps worked it out within 2 weeks so that Alec could become part of their brotherhood. So at Miramar, California, in a special event, his dream was realized.

Alec took his place in front of the commanding officer of MWCS-38, Lt. Col. Koichi Takagi, who kneeled down and took Alec’s small hand into his own and pressed the unit’s challenge coin into his hand.

“Alec, this coin means that you are forever a member of Marine Wing Communication Squadron 38,” Takagi articulated. “You are the newest and bravest member of the unit and we are glad you are here. Welcome to the Marine Corps!”

Alec’s face changed from serious to a look of awe as he started realizing what was happening.

With the coin in his hand, it was official. Alec, who had been fighting against his terminal illness for the last few months, was an honorary Marine.

(Read more of his story here)

Alec wore his very own special uniform, with his name on it. He was allowed to command his first formation, and lead them in an exercise that included push-ups, sprints, and jumping jacks. Then he was taken on a tour of the facilities.

Giving a terminally ill child the dream of becoming a United States Marine is something different units have done several times before.

As for Alec, three weeks ago he also become an honorary SWAT officer with the San Bernardino PD.

Today we gained an honorary SWAT officer. Alec Rubio was able visit us and get a taste of what it is like “behind the scenes.” Stay strong in your battle, Alec! pic.twitter.com/52XW0AuEfL