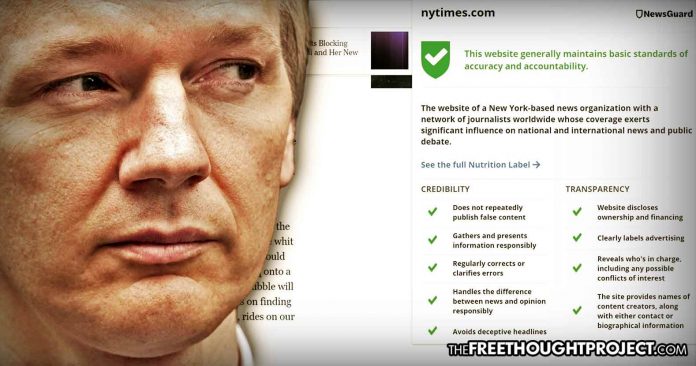 A new level of “fact checking” and “fake news” counter attacks are coming. This time, however, it won’t just be on Facebook or Twitter or Google, it will be internet and device wide. This fact checking service is being sold to the public under the name “NewsGuard” but the only thing it appears to be guarding is the establishment.

Newsguard attempts to set itself outside of the other allegedly “unbiased” fact checkers like Snopes and Politifact by setting out to monetarily cripple independent media sites by having their ads pulled.

“By licensing the NewsGuard ratings, advertisers limit their advertising, including programmatic advertising, to sites that meet the NewsGuard criteria. Advertisers use this data and related information about sites to craft efficient—and safe—ad campaigns,” their website reads.

But, what this really means is that sites like the Free Thought Project, who are entirely open about the subjective nature of our content (meaning we really love peace and freedom and have disdain for tyrants) will be hit in our only source of substantial revenue.

Newsguard employees contacted TFTP in the middle of last year to conduct a series of interviews in which we answered all of their questions honestly. We were not secret about our pro-freedom and antiwar stance. We also were not accused of ever knowingly publishing anything false and noted how if we got something wrong a retraction was issued and a statement released. However, they still gave us a rating in which their extension warns visitors that they should “proceed with caution.”

In the meantime, however, companies like NPR, WaPo, NY Times, FOX News and others, who have all been caught publishing lies which had and could have had catastrophic consequences—like war—all get a pass from Newsguard.

To illustrate this point, we will highlight some recent examples of these major news corporations—who are all considered “safe” by Newsguard—but who have lied through their teeth, promoting misinformation, helping to start wars, and having a hand in some of the deadliest conflicts in US history.

One example of this misinformation is from NPR. As TFTP reported in 2017, NPR falsely accused WikiLeaks of posting 9 GB of files from then Candidate Emmanuel Macron’s campaign. They claimed the documents contained fake data and painted WikiLeaks as the perpetrator behind it.

Despite being called out for promoting lies, NPR has never retracted this statement and still receives a “green” rating from Newsguard.

Wikileaks posted 9 gigabytes of Macron's campaign data, which is said to include both real and fake documents.https://t.co/ib5V8qfsKs

When it comes to believing NPR or WikiLeaks, we will side with WikiLeaks every time.

NPR is not a credible news organization.

Consequently, WikiLeaks—who has never had to issue a single retraction in their history as journalists—is given the same “proceed with caution rating” as TFTP.

Now on to the infamous Washington Post who has been caught time and again promoting outright false information, especially about Russia.

In 2017, WaPo ran an article titled, Russian hackers penetrated U.S. electricity grid through a utility in Vermont, U.S. officials say, suggesting the nation’s power supply stood at risk to be taken down. This article incited mass fear and hatred toward Russia. But it was simply not true and DHS confirmed it was false.

“While our analysis continues, we currently have no information that indicates that the power grid was penetrated in this cyber incident,” DHS assistant for public affairs J. Todd Breasseale said in a statement cited by Politico.

But did WaPo issue an immediate retraction? No, they did not. Instead, they simply reworded the title differently as not to further perpetuate the mass panic and hatred toward Russia they had already kindled.

Newsguard also ignores the $600 million conflict of interest with the CIA and the sole owner of the WaPo, Jeff Bezos.

For lying repeatedly to the public and holding ominous conflicts of interest, Newsguard gives the Washington Post a “green” and safe rating.

What about FOX News whose embarrassing tactics of promoting utterly false information has stung them on countless occasions?

In 2016, the FOX News “terror expert,” paraded around on the network as some CIA-insider for over a decade was exposed as a fraud. He would even be sentenced to prison for impersonating an “Outside Paramilitary Special Operations Officer” for the Central Intelligence Agency for decades — from 1973 until 2000. But this is okay, according to Newsguard.

Fast-forward to 2017 and they got caught doing the exact same thing—again. On an edition of the since-cancelled O’Reilly Factor, host Bill O’Reilly brought on a guest named Nils Bildt, who was introduced as “a Swedish defense and national security advisor,” to discuss Sweden’s refugee policies.

Bildt went on a minutes-long rant about the immigration problem in Sweden to effectively whip up hatred toward Muslim immigrants and all the while FOX News is claiming he’s a national security adviser. However, as TFTP reported at the time, the Swedish Defense Ministry came forward and said they had “no spokesman by that name” and noted that “we do not know who he is.”

Turns out that Bildt is actually a man named Sven Tolling who runs several security companies in the US. FOX News gave him a platform on which he fear mongered to seemingly boost business for these companies.

Last but not least is the New York Times.

According to the widely discredited official story of the Gulf of Tonkin incident, on August 2, 1964, the destroyer USS Maddox, while performing a signals intelligence patrol as part of DESOTO operations, was pursued by three North Vietnamese Navy torpedo boats of the 135th Torpedo Squadron. The North Vietnamese torpedo boats then attacked with torpedoes and machine gun fire.

Two days later, according to the official story, on August 4, 1962, the NSA reported that a second Gulf of Tonkin incident occurred and US ships were attacked once again.

The next day, without question, on August 5, 1964, the New York Times reported “President Johnson has ordered retaliatory action against gunboats and ‘certain supporting facilities in North Vietnam’ after renewed attacks against American destroyers in the Gulf of Tonkin.” Additional outlets, such as the Washington Post, echoed this claim.

The outcome of these two incidents was the passage by Congress of the Gulf of Tonkin Resolution, which granted then-President Lyndon B. Johnson the authority to assist any Southeast Asian country whose government was considered to be jeopardized by “communist aggression.” The resolution served as Johnson’s legal justification for deploying U.S. conventional forces and the commencement of open warfare against North Vietnam.

As a result, 58,177 Americans would lose their lives. Additionally, over one million North and South Vietnamese, including 627,000 civilians would be slaughtered.

While that was in 1964, we can look more recently at the case of “WMDs” in Iraq.

“Intelligence gathered by this and other governments leaves no doubt that the Iraq regime continues to possess and conceal some of the most lethal weapons ever devised,” then president George W. Bush asserted in a public address on March 17, 2003. “This regime has already used weapons of mass destruction against Iraq’s neighbors and against Iraq’s people.”

Bush’s assertions were questioned by not only human rights experts, but by U.N. weapons inspectors and countless others. However, shortly after the U.S. invaded the sovereign nation, the New York Times took up the slack to fill in the appropriate casus belli — and began beating the war drums.

NY Times reporter Judith Miller notoriously reported on a source she described only as an Iraqi scientist who had seen several extensive caches of such weapons stored somewhere in the country. American weapons experts, she claimed, “said the scientist told them that President Saddam Hussein’s government had destroyed some stockpiles of deadly agents as early as the mid-1990’s, transferred others to Syria, and had recently focused its efforts instead on research and development projects that are virtually impervious to detection by international inspectors, and even American forces on the ground combing through Iraq’s giant weapons plants.”

In hindsight, Miller’s problematic report turned out to be horrendously flawed, and the Times spent months attempting to backtrack. However, the damage — fomenting wide-scale public support for war and mass destruction — had been done, and millions would die as a result.

For putting out false information that garnered support for wars that led to the deaths of millions, the New York Times also has a green light from Newsguard.

But then again, none of this should come as a surprise, given the extensive list of neocon “advisers” openly named by Newsguard on their own website.

Our friends over at Mint Press News have devoted a lot of time to prying open this most insidious entity. If you want to delve a little deeper into these neocon connections and how they plan on ruining the flow of information as we know it, you can do so by reading their well-written piece on it at this link.

Ironically enough, while searching for the link to Newsguard on Google, using our Webroot spyware extension for Chrome, their website comes up with a warning that it likely contains malware or other security risks. An ominous indicator indeed.