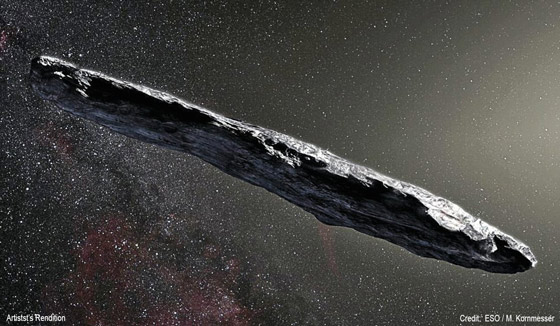 For thousands of years human civilization has documented objects in the sky. With the advent of instant video sharing, we’ve seen hundreds, perhaps thousands of cases of unidentified flying objects. Scientists and governments have discounted the vast majority of these instances as meteors, asteroids, man-made rocket tests or weather balloons.

But on October 19, 2017, a Canadian astronomer saw an anomaly floating through our solar system that can’t be so easily dismissed.

The object, dubbed “Oumuamua,” is the first ever object detected by humans that originated outside of our own solar system. Moreover, what makes Oumuamua even more intriguing is that as it rounded the sun it accelerated in such a way that our known laws of physics simply can’t explain it.

That is, unless the object has its own propulsion system, which would in turn suggest that it is not naturally occurring, but rather, deliberately built by an advanced civilization.

The claim sounds like an Ancient Aliens conspiracy theory, until you realize that the scientists behind the theory is none other than Avi Loeb, Chairman of Harvard University’s Astronomy department and founding director of The Black Hole Initiative. And while most scientists would never risk their careers over wild and outlandish claims, Loeb says he has enough tenure to not be concerned about it. That and he believes his analysis is accurate.

According to Loeb, the acceleration data sourced from the Hubble Space telescope is indicative of an object that has been, “deliberately sent to the inner solar system,” and he believes it could be a reconnaissance spaceship.

What does it feel like to sit next to colleagues in a university lunchroom a day after publishing an article arguing that Oumuamua may actually be a reconnaissance spaceship?

Loeb: “The article I published was written, in part, on the basis of conversations I had with colleagues whom I respect scientifically. Scientists of senior status said themselves that this object was peculiar but were apprehensive about making their thoughts public. I don’t understand that. After all, academic tenure is intended to give scientists the freedom to take risks without having to worry about their jobs. Unfortunately, most scientists achieve tenure – and go on tending to their image.”

“It was only under consecutive observation for six days, from October 25 to 31 – namely, a week after its discovery. At first they said, Okay, it’s a comet – but no comet tail was visible. Comets are made of ice, which evaporates as the comet approaches the sun. But we didn’t see a trail of gas or dust in Oumuamua. So the thinking was that it must be an asteroid – simply a chunk of stone. But the object rotated on its axis for eight hours, and during that time its brightness changed by a factor of 10, whereas the brightness of all the asteroids that we’re familiar with changes, at most, by a factor of three. If we assume that the light reflection is constant, that means its length is at least 10 times greater than its thickness.”

The biggest surprise came last June, when new data from the Hubble Space Telescope showed that the mysterious object had accelerated during its visit to the inner solar system in 2017 – an acceleration that is not explained by the sun’s force of gravity.

We have no way of knowing whether it’s active technology, or a spaceship that is no longer operative and is continuing to float in space. But if Oumuamua was created together with a whole population of similar objects that were launched randomly, the fact that we discovered it means that its creators launched a quadrillion probes like it to every star in the Milky Way. Of course, the randomness is significantly reduced if we assume that Oumuamua was a reconnaissance mission that was deliberately sent to the inner solar system – namely, to the habitable region where life would be feasible. But we need to remember that humanity didn’t broadcast anything tens of thousands of years ago, when the object was still in interstellar space. They didn’t know there was intelligent life here. Which is why I think it’s just a fishing expedition.”

Full Interview Via Haaertz: If True, This Could Be One of the Greatest Discoveries in Human History

The object Oumuamua is long gone and we may never know what it really was.

What we do know is that we’ve seen similar cigar-shaped objects appear in the skies over Earth throughout history.

On April 14, 1561 the town of Nuremberg, Germany was abuzz with contemporary news reports highlighting a celestial phenomenon directly overhead. According to witnesses, there was some sort of aerial battle involving various types of alien aircraft.

The event was documented in local newspapers: Here is a brief description of the events of the day translated from the news report above:

These all started to fight among themselves, so that the globes, which were first in the sun, flew out to the ones standing on both sides, thereafter, the globes standing outside the sun, in the small and large rods, flew into the sun. Besides the globes flew back and forth among themselves and fought vehemently with each other for over an hour. And when the conflict in and again out of the sun was most intense, they became fatigued to such an extent that they all, as said above, fell from the sun down upon the earth ‘as if they all burned’ and they then wasted away on the earth with immense smoke. After all this there was something like a black spear, very long and thick, sighted; the shaft pointed to the east, the point pointed west. Whatever such signs mean, God alone knows.

While hard to believe, consider the shape of the object identified in October of 2017 and compare it to the images above.

If nothing else, it’s curiously coincidental.

Another example of a cigar-shaped or rod-type object was observed as recently as 2010, when it shut down a Chinese airport. The incident was actually reported on by ABC News:

The origins of these objects may never be known, but more evidence of the existence of an advanced alien species begins to emerge. Some have even suggested that governments around the world may be actively working with them and utilizing advanced technologies.

For now, it’s all very hush-hush. but perhaps one day the people of the world will witness direct contact with an alien species not of this planet.