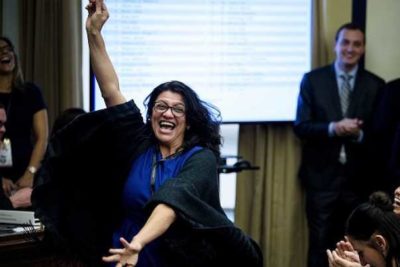 Speaking of impeachment: “This woman is an anti-Semite, a war mongering hate filled Palestinian who has vowed to try and destroy our constitutional rights, hates America, hates American citizens.”  Yes, that’s right. There is no doubt that Tlaib will use her platform in Congress to spew lies and hatred against Israel, President Trump, and anyone else whom the left targets. This impeachment petition is unlikely to gain any traction, but it is a welcome sign that many Americans are not taken in by the media’s fawning over Tlaib, and are disgusted by her anti-Americanism and hatred.

Unfortunately, she is likely to be in Congress for a very long time.

A Change.org petition calling for the impeachment of Rep. Rashida Tlaib (D-MI-13) already has close to 160,000 signatures.

“This woman is an anti-Semite, a war mongering hate filled Palestinian who has vowed to try and destroy our constitutional rights, hates America, hates American citizens,” the petition states. “She’s a danger to our sovereignty, a detriment to society, and to this country, and is unfit to serve in any capacity within our government.”

The petition also takes issue with Tlaib’s election, claiming that she “lied about living in Detroit” by “using her father’s house address.”

Tlaib made headlines earlier this week when she vowed to “impeach the motherf—” during a party in celebration of her being sworn in to Congress.

“I stand by impeaching the president of the United States. I ran on that,” she said in an interview discussing her comments. She called her promise to impeach President Donald Trump something she “very much” holds “dearly.”

“They love that I’m real, and that I am very much focused on getting the government back up and running, but also making sure we’ve held the president of the United States accountable,” she said.

Tlaib later apologized that her comments caused a “distraction,” but refused to apologize for the explicit remarks….

Why Do Dems Keep Threatening To Nuke Gun Owners?
June 24th, 2021 The Lid

The American people deserve explanations for these “election anomalies”