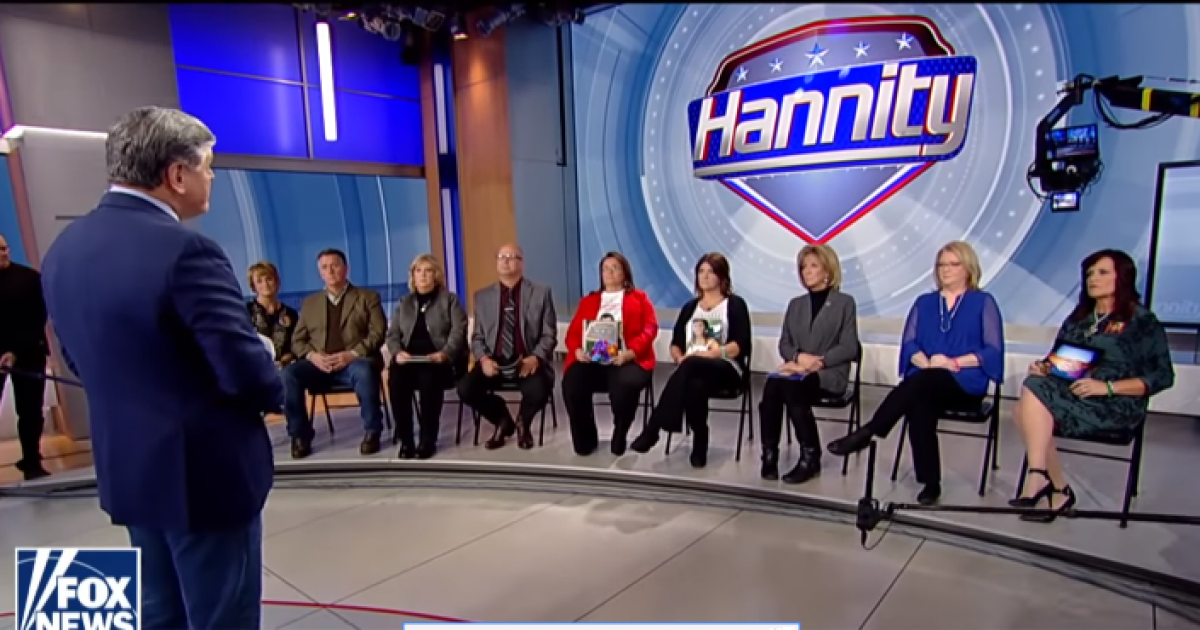 On Friday, Sean Hannity welcomed several “angel families”- families who have lost loved ones from the actions of illegal aliens (via Breitbart). Nancy Pelosi has refused to meet with these families – not surprising, since she and Schumer don’t care about Americans. Democrats have actually said that the situation at the border is a “manufactured crisis.” It’s not “manufactured” for the families known as  “angel families.”

“I would like to invite Nancy Pelosi and Chuck Schumer to come and cry with me on January 28 at my son’s grave. It’s permanent family separation. What separates me from my son is not a fence, it’s 6 feet of dirt…”

Other angel parents who lost children spoke of the losses.

And I want to call on our president to please, implement E-Verify, please, stop the insanity for illegal aliens to come to our country and punish employers.

This guy that murdered my son would be coming out of prison next year. My peace and quiet will be taken away from me and my family because I don’t know if he is going to come after me. Why should he live?” Agnes Gibboney, mother of  Ron Gibboney.

Ron was murdered by an illegal. And California may release him. Agnes is a legal immigrant.

“What is even more offensive is I’m a legal immigrant who came — followed the law, came through the right channels, to this country. Why isn’t my country and these politicians standing up for me and for the American citizens of this country? They stand up with illegal aliens and criminals.” Agnes Gibboney

The fact that the Democrats are refusing to listen to Americans in any form speaks volumes about their real agenda. Hannity had several angel parents on his show, but their stories are repeated across the nation…Democrats only care about illegals and the votes they hope to get. They also do not care about the costs of dealing with the illegal aliens that come to this country.

On Laura Ingraham’s show, DJ Corcoran held a photo of his son Pierce, 22. His son died when an illegal alien struck him in a vehicle.

“It really ticks me off, when I see Pelosi acting like a 3-year-old and saying that it’s fabricated. Ms. Pelosi, this is our son, this is Pierce Corcoran. He is dead. His death is real. His death is real. It’s not fabricated. He died at the hands of an illegal immigrant. We’re upset about that. We feel that the government owes the American people better than what we’re getting right now. And it really just upsets us when we hear you saying that, basically, that it doesn’t matter. Well, it matters to us.” DJ Corcoran

Nancy and Chucky need to pay attention to the American people instead of the illegals.