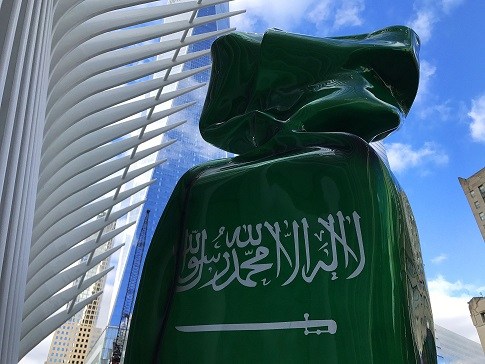 According to the previously classified 28 pages of the Congressional report on 9/11, Saudi Arabia was complicit in the 9/11 attack on America.

So it is nothing less than a slap in the face of Americans that a sculpture bearing the emerald Saudi flag with a sword and the Arabic inscription, “There is no god but Allah, and Mohammed is the prophet,” was recently erected on the World Trade Center grounds, a stone’s throw away from the 9/11 memorial.

Davis Richardson reports for Observer, January 9, 2019, that the 9-foot-tall sculpture, shaped to resemble a piece of candy, celebrates Saudi Arabia’s place in the G20 Summit. It was created by French sculptor Laurence Jenkell in 2011 as part of the larger “Candy Nations” installation depicting G20 countries as sugary delights, and has since been featured in over 25 countries. All 20 sculptures are currently on display outside the Oculus shopping center.

In its continuing efforts to transform the World Trade Center site into a dynamic space in Lower Manhattan, the Port Authority announced that beginning today it will showcase famous candy sculptures around the World Trade Center campus crafted by renowned French artist Laurence Jenkell. Each of the sculptures features flags from countries in the G20 summit, and the art work was commissioned by companies and organizations including the Chanel Foundation, the International Olympic Committee and Coca-Cola.

“I first created flag candy sculptures to celebrate mankind on an international level and pay tribute to People of the entire world. Given the unique and justified sensitivities surrounding the World Trade Center, it came to my mind to propose to remove the sculpture showcasing the flag of Saudi Arabia, or relocate it to a less sensitive location. But there is no way I can do such a thing as the flag of Saudi Arabia is entirely part of the G20 just like any other candy flag of this Candy Nations show.”