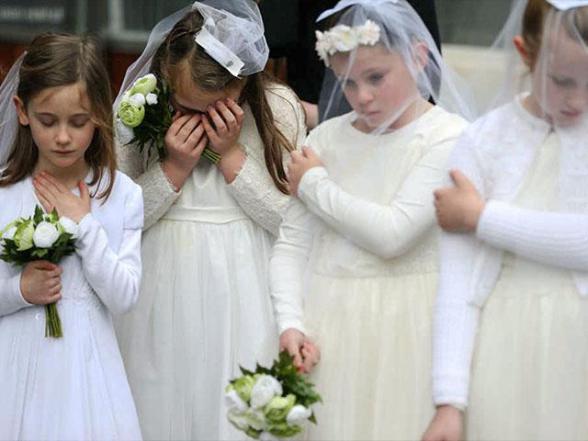 Of course they had the highest percentage of approved petitions. The government didn’t want to appear “Islamophobic,” and sacrificed the well-being of these girls to that fear.

Turkey’s directorate of religious affairs (Diyanet) said in January 2018 that under Islamic law, girls as young as nine can marry.

“Islam has no age barrier in marriage and Muslims have no apology for those who refuse to accept this” — Ishaq Akintola, professor of Islamic Eschatology and Director of Muslim Rights Concern, Nigeria

“There is no minimum marriage age for either men or women in Islamic law. The law in many countries permits girls to marry only from the age of 18. This is arbitrary legislation, not Islamic law.” — Dr. Abd Al-Hamid Al-‘Ubeidi, Iraqi expert on Islamic law

There is no minimum age for marriage and that girls can be married “even if they are in the cradle.” — Dr. Salih bin Fawzan, prominent cleric and member of Saudi Arabia’s highest religious council

“Islam does not forbid marriage of young children.” — Pakistan’s Council of Islamic Ideology

Hadiths that Muslims consider authentic record that Muhammad’s favorite wife, Aisha, was six when Muhammad wedded her and nine when he consummated the marriage:

The Prophet engaged me when I was a girl of six (years). We went to Medina and stayed at the home of Bani-al-Harith bin Khazraj. Then I got ill and my hair fell down. Later on my hair grew (again) and my mother, Um Ruman, came to me while I was playing in a swing with some of my girl friends. She called me, and I went to her, not knowing what she wanted to do to me. She caught me by the hand and made me stand at the door of the house. I was breathless then, and when my breathing became all right, she took some water and rubbed my face and head with it. Then she took me into the house. There in the house I saw some Ansari women who said, “Best wishes and Allah’s Blessing and a good luck.” Then she entrusted me to them and they prepared me (for the marriage). Unexpectedly Allah’s Apostle came to me in the forenoon and my mother handed me over to him, and at that time I was a girl of nine years of age. (Bukhari 5.58.234).

“US govt approved thousands of child bride requests,” AP, January 12, 2019 (thanks to The Religion of Peace):

WASHINGTON: Thousands of requests by men originally from other countries, including Pakistan, to bring in child and adolescent brides to live in the United States were approved over the past decade, according to government data obtained by AP news agency. In one case, a 49-year-old man applied for admission for a 15-year-old girl.

But the data raises questions about whether the immigration system may be enabling forced marriage and about how US laws may be compounding the problem despite efforts to limit child and forced marriage. Marriage between adults and minors is not uncommon in the US, and most states allow children to marry with some restrictions.

There were more than 5,000 cases of adults petitioning on behalf of minors and nearly 3,000 examples of minors seeking to bring in older spouses or fiancés, according to the data requested by the Senate Homeland Security Committee in 2017 and compiled into a report.

Some victims of forced marriage say the lure of a US passport combined with lax US marriage laws are partly fuelling the petitions.

“My passport ruined my life,” said Naila Amin, a dual citizen from Pakistan who grew up in New York City. She was forcibly married at 13 in Pakistan and applied for papers for her 26-year-old husband to come to the country.

“People die to come to America,” she said. “I was a passport to him. They all wanted him here, and that was the way to do it.”

Amin, now 29, said she was betrothed to her first cousin Tariq when she was just eight and he was 21. The petition was eventually terminated after she ran away.

She said the ordeal cost her a childhood. She was in and out of foster care and group homes, and it took a while to get her life on track.

“I was a child. I want to know: why weren’t any red flags raised? Whoever was processing this application, they don’t look at it? They don’t think?” she asked.

USCIS didn’t know how many of the approvals were granted by the State Department, but overall only about 2.6 per cent of spousal or fiancée claims are rejected.

Separately, the data show some 4,749 minor spouses or fiancées received green cards to live in the US over that same 10-year period.

The country where most requests came from was Mexico, followed by Pakistan, Jordan, the Dominican Republic and Yemen. Middle Eastern nationals had the highest percentage of overall approved petitions.