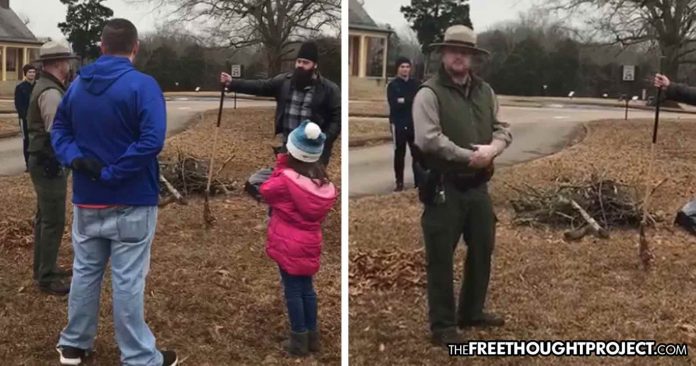 As the government shutdown enters week five, debris, trash, and snow are piling up at national parks across the country as the bureaucrats who get paid to maintain them stay home. Luckily, however, volunteers from all walks of life have stepped up to fill their shoes and they’ve been doing a fantastic job—that is, when the government isn’t kicking them out.

A group of libertarians in Tennessee has been volunteering at national parks to do the bureaucrats’ jobs and they were doing it successfully, until this week.

As the volunteers with the Libertarian Party of Tennessee Delta Region began cleaning up Shiloh National Military Park over the weekend, they were quickly approached by Park Rangers who demanded they leave the property.

According to the representative from the Libertarian Party, the volunteers were told to cease their work and leave immediately.

We as the Libertarian Party of Tennessee Delta Region planned a volunteer effort to clean Shiloh National Military Park. This is apart of a massive effort conducted throughout the US to help keep our parks clean during the government shutdown.

No group of volunteers has been stopped throughout this nationwide effort until today. We were told about 30 minutes into our cleaning that we were not officially “volunteers” and would have to stop. We attempted to reason with the park ranger however he blatantly told us that even walking along side the walkways and picking up trash was prohibited….

The Libertarian Party is a party that centers on volunteerism and helping our community. It is a shame in the “Volunteer State” we are stopped from volunteering.”

Indeed, the irony of being stopped from volunteering in the state whose motto is the “volunteer state” is supreme and speaks to the nature of government.

As the video below shows, the park ranger couldn’t give them a good reason for making them leave. He explained that the park is open and that they could go wherever they would like. However, if they tried to make the place look nicer by picking up trash and debris along the way, then they were crossing a line.

“There’s forms that have to be filled out,” the ranger says in the video.

According to the ranger, picking up piles of leaves and sticks is not okay unless you scribble on a bunch of pieces of paper before doing it.

After arguing with the ranger, the group eventually saw the futile nature of the situation and they acquiesced and left.

Why, exactly, government agents would want to prevent people from making the park look nice—for free—is a mystery. However, it should come as no surprise. Good Samaritans often find themselves in the cross hairs of government when trying to do good deeds like feeding the homeless.

Luckily, as TFTP has recently reported, other groups have been allowed to volunteer and are doing a great job at it.

This shutdown is proving the power of free enterprise and volunteerism, and it’s doing it well.

Youth groups, private businesses, and political clubs have stepped up across the country to fill in where the government has left off.

From Yellowstone to Washington D.C., dedicated private individuals have been picking up trash, clearing snow from roads, maintaining trails, cleaning toilets, and much more. And, they are all doing it for free.

Business owners and individuals from all walks of life have seen the void created by this shutdown and they are proving that private citizens can do these jobs just as good or better than the state. More importantly, they don’t need the promise of a taxpayer-funded paycheck, guaranteed promotions, and a golden retirement to do it.