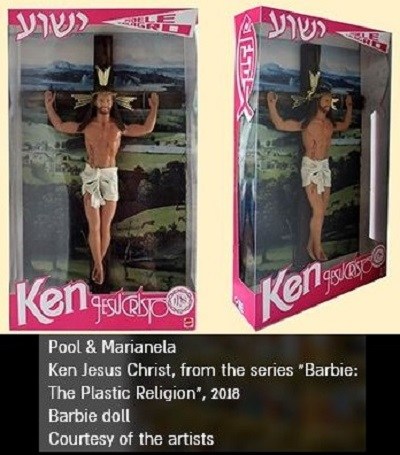 An exhibition at the Haifa Museum of Art in Israel displays artworks that insult Jesus Christ, but not the Islamic and Judaic religions.

The museum describes the “Sacred Goods” exhibition, curated by Shaked Shamir, which began on August 4 last year and ends today, as follows:

This exhibition focuses on the responses of contemporary artists to issues of religion and faith in the contemporary global reality, which is dominated by the consumer culture. In recent decades, various cultures and places around the world have witnessed a surprising religious revival. Theorist Boris Groys argues that in a world that has renounced the grand secular ideologies, the return to religion fulfills the need for meaning. Contemporary religions offer answers to the ills of the modern world and the sense of emptiness that pervades this era of extreme individualism and aggressive capitalism…. Consumer culture dictates a superficial interest in religious products and techniques, while ignoring the philosophical and ethical meanings of religion…. In the contemporary context, the artists participating in the exhibition employ religious symbols to criticize the encroachment of the consumer culture on our lives in general, and on the religious sphere in particular. The artists also criticize the way religions use consumer values and practices in order to prosper in the contemporary reality.

The exhibition includes these artworks and images that blaspheme God the Father, Jesus Christ and insults Christianity:

Our Lord Jesus Christ as a Ken doll:

But no mockery of the Ark of the Covenant that’s celebrated in Judaism, or any other Judaic symbol or figure, nor of Islam:

In addition to insulting Jesus, the art exhibition trashes religion in general, while glorifying globalization:

In a reality wherein globalization aspires for cultural unification, religion offers its followers the illusion of a return to their roots and to distinctive local traditions.

Christian leaders in Israel have singled out Finnish artist Jani Leinonen‘s McJesus sculpture of a crucified Ronald McDonald, while ignoring the other offensive exhibits.