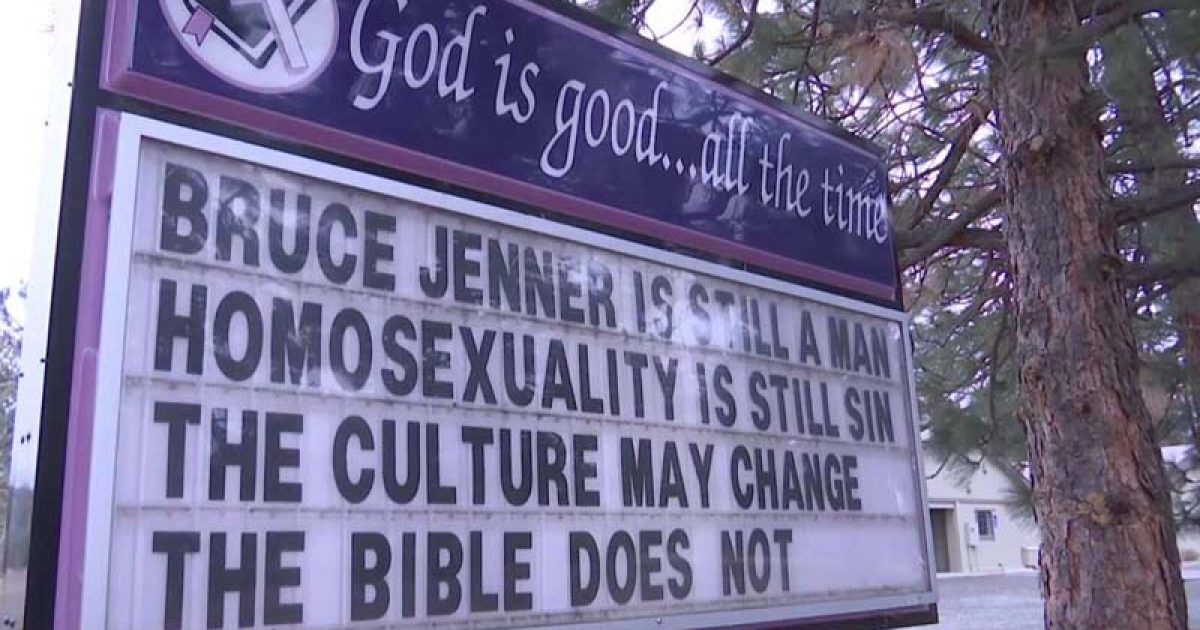 I am thrilled when I hear stories where men of God stand and proclaim the truth of what the Bible says.  Though in this particular case, it is a sad thing that this pastor was removed from His Church by angry non-believers, which is what they are evidencing themselves to be, for posting the truth about Bruce Jenner still being a man, sodomy still being a sin, and that being the truth of the Bible whether people like it or not.

Pastor Justin Hoke posted a picture to Facebook of the text he placed on the church sign.

Bruce Jenner is still a man. Homosexuality is still sin. The culture may change. The Bible does not.

Adding the Scripture from 1 Corinthians 13:6, “Love does not rejoice in iniquity, but rejoices in the truth” is clear evidence that Hoke was simply attempting to make clear to the culture that embraces the perversion of Bruce Jenner and sodomites is going against the clear teachings of the Bible, and is a rebuke against following in that path.

As of today, I am no longer the pastor of Trinity Bible Presbyterian Church.

After much prayer and counsel, I have decided that it is best to briefly communicate what has taken place.

Therefore it was determined that it would be in the best interest of the local body for us (TBPC and the Hoke family) to part ways.

“I did not want to leave, I did not quit and I was willing to stay,” Hoke wrote Monday on Facebook.

On Saturday, Justin Hoke, former pastor of Trinity Bible Presbyterian Church in Weed, Calif., announced that he had been ousted from his position. This came days after the church erected a billboard declaring Bruce Jenner — now known as “Caitlyn” — still to be a man, and after LGBT activists vandalized the sign.

“As of today, I am no longer the pastor of Trinity Bible Presbyterian Church,” Justin Hoke announced on Facebook. He recounted a four-step process of growing alienation.

Late on Sunday night, after the pastor was ousted, he posted a long message on Facebook focusing on the gospel. “We live in a time in world history where the truth of the Bible about how men can be reconciled with God has been so distorted, that while most have heard some presentation of the facts, they have not heard the true gospel,” he wrote. “The gospel is the work which Jesus accomplished to redeem His people from their sins. He did this by becoming fully man and remaining fully God.”

There is only one thing to do, and that is to stand firm and preach the whole counsel of God and stick to the truth.  There are plenty of hirelings and false teachers in the Church providing cover for these kinds of sins.  We don’t need any more of those.  We need men like Pastor Hoke who is willing to not only speak the truth but even to suffer the consequences of angry sinners who seem to love the world more than they do God and His Word.